In my last review I picked a collection of classic pulp stories from the 30s that had a female protagonist and were co-written by a female author. So I thought I'd continue the female author theme but move on somewhat in time to the 70s and Tanith Lee's Night's Master. 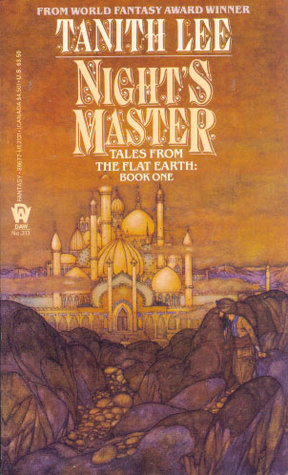 Often described as being reminiscent of One Thousand and One Nights, probably because of the vaguely Middle-Eastern setting and because of the rather amusing sexual incidents which crop up from time to time, Night's Master is in many ways superior to that classic. it has a strong undercurrent of amorality and dark humour, reasonably so since the chief protagonist is a demon, but is also very sensual in its language. In fact I thought it a bit like By Grand Central Station, I Sat Down and Wept without the emotional baggage, but the same kind of power evoked by the choice of words.

It's a collection of short stories that are linked by characters and an artefact and end up being also a coherent novel in itself. A goodly length but certainly not one of the vast fantasy tomes which the late 70s began to throw up and continue to be regurgitated to this day (admittedly sometimes quite tastily at first).

Here's the first edition US cover, which does actually depict a scene from the book; quite unusual I think for a 70s cover, though it does manage to utterly fail to capture the spirit of the work: A flat earth where the gods are bored of mortal doings, if they were ever interested, and the demon Azhrarn amuses himself at mortal expense. This book has almost everything that could seriously upset some readers: homosexuality, bestiality (hugely amusing as a way to get past a rather fearsome guardian of treasure), acts of utterly callous cruelty, unrepentant sororicide and so forth, all delivered with a passionate prose which is never less than beautiful. Almost everything is driven by some kind of vice: lust, avarice, jealousy. There are few admirable characters lurking within these pages, and mostly those that are do not prosper.

Without question one of the very best fantasies I have ever read. Miles better than the more famous contemporary works of Moorcock (Elric) or Donaldson (Thos. Covenant) and yet, despite having like those others spawned a considerable series with the same setting, somehow less famous.

There is an audio version available from Audible, which I would wholeheartedly recommend. The narrator's manner is somewhat 'bedtime story', which is, I think, deliberate, and certainly increases the humour of many passages without detracting from the essential beauty of the words.

Go and buy it now.

review by David Hunter
Posted by Heroines of Fantasy at 2:00 PM

I didn't even know this was up! So sorry, dear.

You know, Tanith Lee is one of those I am completely unfamiliar with, outside of a name. I will have to rectify that. Thanks!

Terri, you would LOVE this book!

imho, it deserves a starred review from Heroines of Fantasy, but of course, Dave has the final word on that. :)

Yes. This is one I'd give a starred review too.

She's still writing, and got an award at World Fantasy last year. My favourite of hers is When the Lights Go Out, set in a seaside tourist town in the off-season.