Wednesday Review: The First Blast of the Trumpet 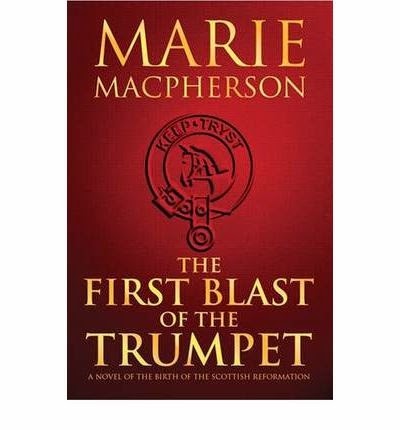 Marie Macpherson’s novel is the first part of a trilogy recreating the life of John Knox, the great Scottish preacher and reformer. It’s an ambitious and detailed work, spanning the years 1511-48, set in and around the Scottish courts of James IV and V. The book has a large cast of characters, some of whom a reader will know from history and others invented for purposes of the story. In the background, always, is war, or the threat of war, with England. Scotland has weak kings and a squabbling nobility, and its alliance with France leads to disaster at Flodden.

The novel opens strongly, with three girls by the fireside at Hallowe’en, conjuring their futures out of nutmeats and their nurse’s stories. All they wish for comes true, though none gets exactly what she’d hoped for. Two of the threads spun out of that first scene run short; the third becomes the weft woven through the warp of history. This central figure is Elisabeth Hepburn, prioress of St. Mary’s Abbey in Haddington, near Edinburgh. Elisabeth is a reluctant nun who, however, grows into an effective governor of her order, despite her love for a poet, the king’s herald, David Lindsay. Knox himself is introduced about halfway through and, from about the two-thirds mark, becomes a second focus to the story. I should note that, although Elisabeth and Lindsay were both as real as Knox himself, most of the interactions between the three in the novel arise from artistic licence.

A major theme is religious change; in particular, the absence of real religion from the hearts and minds of powerful figures in the hierarchy of the church. Venality and neglect provide fertile ground in which Lutheran doctrine can take seed and flourish, and this tension between church and conscience provides the major conflict of the book: Elisabeth recognises the corruption and does her best to counter it from within, providing education and care to the women in her charge; Lindsay rails against it in his writing, producing The Satire of the Three Estates; and Knox (in this story, Elisabeth’s godson) comes to reject Catholic doctrine utterly, turning from it towards Luther and Reformation.

The book is made distinctive by its strong Scottish flavour, including many references to ballads and folklore, and use of Scots dialect and words. If you don’t know a ‘puddock’ from a ‘mowdiewort’ or ‘tapsalteerie’ from ‘widdershins’ at the book’s beginning, you will by its end. It’s also good on conjuring places. Likely I had a bit of an advantage here, as I live close by its setting, but I can assure you that the descriptions are accurate as well as evocative. There’s nothing like seeing places one knows brought to life – I particularly appreciated the scenes set among the windswept towers of Tantallon Castle, which, even now, is one of the most dramatic sites in the south-east of Scotland.

Despite the masculine church hierarchy, the book is filled with strong women, including Betsy, Elisabeth’s nurse, a source of old wisdom and healing, and Sister Agnes, who comforts Elisabeth and feeds her mind by teaching her to read. Elisabeth and Knox are both sympathetic characters, even as their experiences and choices drive them apart. There’s a toughness to both of them, and also a common theme of bettering themselves through learning and education. Each starts off at a disadvantage, Knox his low degree, Elisabeth her womanhood, and each (eventually) has the tenacity to follow their own path despite the cost.

Writers of historical fiction must build a plot that appears to arise naturally out of constrained events as, although history itself is ‘one damned thing after another’, stories need shape and focus to be satisfying. Historical fiction is thus a delicate balancing act. As a reader, I’m happy to accept fictionalised versions of real figures but I found the characterisation of Lindsay at odds with the vigour of his writing. My dissatisfaction with his strands of the story, and at times with other plotlines too, was exacerbated by the narrative initially omitting scenes and, later, jumping back to fill in the gaps. By the end all my questions had been answered but, as I shut the book, I did wonder whether a fully chronological presentation would have been preferable.

However, there is much to admire as a study of a society in conflict. It’s an ambitious historical novel with an emphasis on the history. Macpherson conveys the confusion of unstable alliances between powerful families rather well, and illustrates the bickering and floundering around for power between the rival factions. It’s also extremely rewarding to read a novel set in Scotland at this time. Events of the period south of the border have been reimagined over and over, but I’ve encountered relatively few novels that deal seriously with Scottish figures like David Beaton, the rivalries between the Hepburns and the Douglases, or with Stuarts other than Mary Queen of Scots. This one goes a fair way towards remedying that deficit.

So, summing up, The First Blast of the Trumpet gives a good, solid impression of an important period of Scottish history, warts and muck and all. It delivers a vivid recreation of sixteenth century life – truly, you’ll almost believe yourself there at times. I’m going to wait for the next volume in this trilogy to see how Macpherson’s work develops. As it is, I’d recommend it to readers curious about the people, period and places, and I’m pleased that Macpherson included a list of her sources for those who wish to take their interest further.

The First Blast of the Trumpet by Marie Macpherson

What a great and thorough review, and well-deserved! This perceptive review makes it clear what a great job Marie Macpherson does of sounding so many historic, personal, and gender and religion-related chords all in one novel. The author is very fortunate that Scotland has such a thoughtful, literate, sensitive, and responsive reviewer as Harriet Goodchild!

Your reviews always make me want to add another book to my TBR pile, though I think we've discussed this one before. :) Thanks!