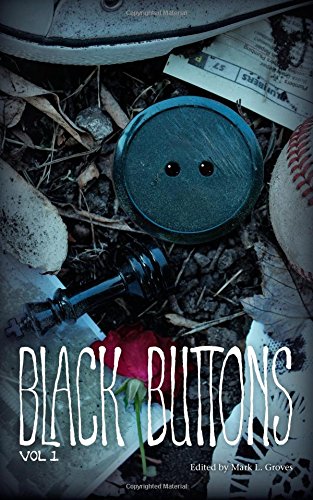 From the cover: According to Midwestern folklore, someone who's been cursed by witchcraft can leave a black button lying on the road. If you pick it up, you'll get more than you bargained for. Taking the button means you also take the curse. In Black Buttons, Vol. 1, five Midwestern writers conjure nine dark tales to cast a spell over your imagination. From blood-soaked board games and truth-addicted psychics, to bio-engineered hunger horrors, sacrificial Stravinsky concerts, and so much more, you'll discover that all is not right where the bible belt buckles. So go ahead, if you dare. Pick up black buttons. Because you're not afraid of some old superstition, are you? Are you...?

Good morning! Cybelle here again with another Wednesday review. This week I read a horror anthology called Black Buttons. In the interest of transparency, I must tell you I know most of the authors personally, but I assure you that has never stopped me from being brutally honest. (Ask anyone who's ever been in a critique group with me). Fortunately, I LOVED this anthology!

All the authors have ties to Kansas City and/or the Ozarks, and each one used these settings in fascinating and original ways. Five of the stories were written by Mark Groves, who displays an impressive range of styles. "Pray for Rain" follows the wanderings of Gaige, a man gifted with amazing psychic powers and addicted to the rush of saying aloud everything he gleans from the minds of those around him. His many years of hearing the scheming, nasty, and often desperate thoughts of others has left him disillusioned with humanity. One night, during a powerful thunderstorm, Gaige encounters two people who will change everything. It is a tragic, gritty, sexually-explicit urban tale with wonderful imagery. In contrast, "Deepdown Drain Repair," the last story in the anthology, is colloquial Ozarkian horror-comedy at its finest. Here Groves spins the tale of a woman whose husband's questionable plumbing skills have a led to a hellish clog. Only the plumber from Deepdown Drain Repair can extract the demonic mess.

Although the stories do not contain many strong heroines (or heroes for the matter), they do provide a range of believable and engaging characters. Shelby Dollar's dark urban fantasy, "Stunted," tells the story of two sisters in a dystopian community controlled by an agricultural company called Ecovine. Food is scarce, and discontent is rampant. Irene tries to protect her unstable, heroin-addicted sister, but Andi doesn't want to be saved. With the help of a Stargazer lily, named after their disgraced father, Andi discovers a way to destroy Ecovine's power. The consequences, however, are horrific for the entire community.

In "Harry," J.E. Petersen spins the tale of a boy and his favorite possession, a foul ball he caught at a Royals games. When the ball accidentally lands in his neighbor's garden and gets confiscated, Ben enlists the help of his little sister to sneak into the old woman's house to retrieve it. He thinks it will be an easy mission, but Mrs. Fletcher shelters a deadly and terrifying secret that the siblings could never have anticipated.

Marissa C. Pelot's, "Bring May Flowers," is a dark coming-of-age story about a young violinist whose band teacher informs the students they will be performing Stravinsky's The Rite of Spring at an exhibition in Kansas City. Sam becomes obsessed not only with the music but the notion sacrifice. Her confused ideas lead her to series of dangerous actions, including a scheme to donate more blood than legally permitted. When the concert is over, Sam considers the possibility of a final sacrifice.

To provide some light relief from the heavier stories, Andrew Rambo's "A Stake in the Heart" tells the story of an old-fashioned vampire who tries to come out the coffin to his modern girlfriend.

Overall, Black Buttons is a brilliant collection of stories, and I'm so impressed by the talented horror writers we have in this city! Just to be a little nit-picky, I did notice a few passages that could have benefited from more careful proofreading but nothing that would really keep a reader from enjoying the stories. I highly recommend this book, especially to anyone who has ever lived in this part of the country. The dialogues and characters are authentic, and you'll never look at the old, familiar haunts the same way again.

Posted by Heroines of Fantasy at 10:21 PM