The Essential Face of Fantasy 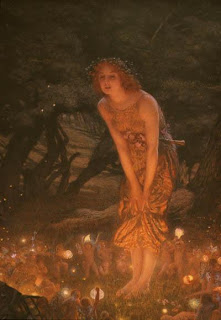 In his essay ‘On Fairy Stories’, J.R.R. Tolkien describes magic -- more precisely, “the Magical” – as “the essential face of Faerie".
As a genre, fantasy has multiple expressions:  dark, humorous, violent, romantic, children’s, YA, adult, urban, epic…the list goes on and on.  Yet the common denominator for all these expressions is the presence of magic.
Writers of fantasy struggle at great length to build systems of magic unique to their worlds.  Readers respond to magic with a critical eye, seeking sorcery that “makes sense”, at least on an instinctive level, and – most importantly – that does not simply function to save the day at the end of our heroine’s journey.
This week I’d like to share some of my thoughts about magic; ideas that have come together as a result of crafting Eolyn, and that continue to evolve as part of my journey with fantasy.
Let's start with:
Magic does not have “rules”, but rather is constrained by rules imposed on it.
Arguably a semantic consideration, but it’s very difficult for me to think in terms of “the rules of magic”, because in my mind, the whole point of magic is that it breaks the rules. Magic acts in ways that defy explanation, most often with respect to the known laws of science.
Nonetheless, effective story telling depends on magic having limits. Certain things can and cannot be done by the wizards, witches, mages and magas of our worlds.  I’ve come to think of these boundaries not so much as an inherent property of magic, but as constraints that result from the imperfect knowledge, imagination and/or abilities of practitioners.  Which brings me to my next thought: 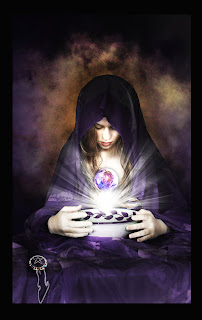 The practice of magic should have cultural foundations.
Similar to what we talked about with respect to religion in fantasy last week, for me the most convincing systems of magic are thoroughly embedded in their respective cultures.  The practice of magic has a past, present and future.  Magical knowledge can evolve, undergo innovation, and be lost.
It is in this context that “the rules of magic” make the most sense to me. A society’s structure, history and current state of knowledge can determine what kind of magic is practiced by its members.  In this way, magic never reaches its full potential because every culture has an imperfect understanding of that potential, and therefore a limited ability to achieve it.
So for example, in an imaginary world we could have one society with warlocks who practice shape shifting but do not engage in divination.  A neighboring land might have witches who see the future and read minds, but are inept when it comes to assuming the form of other animals. For me, these differences are most convincing if they exist for reasons grounded in history and culture.
Magic is not the same as science.
Science can inform systems of magic, and it has become popular in recent years to recur to science for explanations of our magic.  There are some very clever examples of this, one being the application of the law of conservation of mass to the problem of shape shifting.
It is really up to the author how much of a given magical system can be explained (or constrained) using our current understanding of the natural world.  In Eolyn’s world, there is a whole class of magic, Middle Magic, that is essentially an antiquated version of ecology, botany, natural history and medicine.
Yet, however tempting and useful it is to occasionally explain magic through natural laws, sooner or later we need to let magic be magic, and allow it to transcend the framework of science.
Which brings me to my last thought for today: 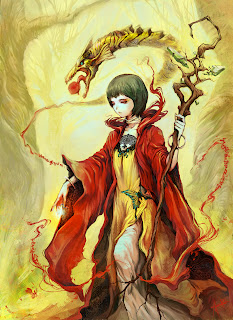 Magic at its heart is not logical.
I’ve noticed that we writers like to dig into magical systems, ours and those of others.  We dissect them and try to make sure every piece fits back together neatly.  This is a good, solid practice that helps us build cohesive worlds, but there’s one irony in the process.  If magic is truly at work, sooner or later, no matter how water-tight “the rules” are, you’ll come across something that does not make sense.
The best part of this is, if everything else is done right, that one illogical piece is never a weakness of the system; the illogical piece is what defines it as magic.
Now, it’s your turn…
Talk to me about magic:  systems of magic that appealed to you, uses of magic that put you off, spells that you thought were totally cool and would like to be able to do in real life.
Also, what do you think the role of “rules” should be in magic?  Does science have a place in explaining magic? Is magic “the essential face” of fantasy?

As an aside, while selecting images for this post, out of curiosity I did a google search for "the face of fantasy".  Google kicked back oodles of portraits of beautiful women, a handful of demonic-looking men (which I found rather curious), and. . .George R.R. Martin.  An essential face of fantasy, indeed.

Posted by Karin Rita Gastreich﻿
Posted by Heroines of Fantasy at 6:15 AM

Email ThisBlogThis!Share to TwitterShare to FacebookShare to Pinterest
Labels: cultural foundations of magic, magic, science and magic, the rules of magic

Wow--so many big thoughts! Like you, I prefer the magic to be steeped into the culture, and the "boundaries" of it shaped by that culture, whether it be social taboos, religion or even environment.

Magical societies need readers who can suspend belief. Without them, it doesn't matter how well-crafted, we fail. Thank goodness for readers who can!

Recently, and I can't remember who or where, but I was part of a discussion concerning when magic goes wrong, when it breaks its own rules, and Hermione Granger's Time Turner came up. It was used so well in The Prisoner of Azkaban--maybe too well. Why couldn't it be used to go back in time and prevent certain events concerning Dumbledore? It could have been! And if there was a reason why it couldn't be, then it should have been mentioned. It was a huge piece of PoA to simply forget about.

Then again--I'm still picking nits over the way Crookshanks got to be the hero in one story, then largely forgotten. I suppose, with a cast of characters THAT big, you can't keep every plate spinning no matter how brilliant you are.

I have more to say! But I'll save it. You KNOW I'll be posting more than once.

I'm kind of split on magic. Part of me harkens to Robert E. Howard's barbarian, where you should never trust a wizard, unless you've just cut him in half with a broadsword. Another part of me loves the shamanistic aspect of magic, where arcane practices come about from the spirit of nature or the essence of things such as runes or words.

I never liked the Dungeons and Dragons use of magic, which was entirely too technical. It was a system that relied on spell components, heirarchical pedagogy, and everything seemed so clinical and *gasp* scientific, that I couldn't help but think it was little more than alchemy disguised as magic. (the two are cousins, in my mind, but not mutually inclusive).

In my worlds, unlike Rowling, magic users aren't born into it, but like musicians, they tend to have an ear for it. Like music, it can be imitated, but mastery of it requires dedication. I like the idea of runes and potions, but at the core, magic is something that has to be worked on, a part of the person's soul goes into it in some degree. Those adept at it without hardly trying are like musical prodigies, and like the star that burns twice as bright, they usually last half as long.

And like music, every artist would be different, to a degree. Sure, you might know the same tunes, but I don't like the cookie cutter "Melf's Magic Missile" sort of spells. Magic isn't a wrench that affects machined parts, it's organic plus.

A spell should be more like a jam session or a symphony.

Also, my analogy of music and magic is a little shaky, but it goes hand in hand with the science fiction example. Yes, I know that music is comprised of meter, notes, the science of accoustics, and a vigorous system of writing, reading, and playing it, but it wasn't always this way. Once upon a time, people just sang or beat on logs, or made whistles or drums out of bones and hides. They didn't know what the hell a C-Major half-step was until they started formalizing music in the Age of Enlightenment. Traditions were passed on through culture, through tradition, and inspiration.

Clint--as always, you've added a fine chunk to the discussion. I love the connection, magic/music. I, too, like the notion of one having a flair for it, then honing it to something bigger, grander, more beautiful. Music must have been a sort of magic, once. Something everyone had access too, but few had mastery of. It is still a mystery to me, how one melds sounds into something like The Messiah, or even Three Blind Mice. Then again, I suppose there are those who have no idea how some people can take words and ideas and write a book with them.
:)

Magic is EVERYWHERE! It's in everything. And it's in the eye of the beholder.

Yeah, I guess I was feeling a little deep last weekend. When I sat down to write my post, I had just finished story 3 of 'The Botany of Desire', about the history of Cannabis, and now I'm thinking maybe there were fumes coming off the pages. ;)

I wonder if that Hermione discussion was at World Fantasy?

Words are pure magic for me, just like music.

Clint -- Very nice analogy with music! I've always thought it interesting that Terri & I independently decided to incorporate music as a kind of magic in our respective novels.

I also like the idea of how magic is a reflection of each individual; how one's soul goes into it. Very well put. Thank you!

(btw -- My word verification is CANTA, which is Spanish for SING, the ultimate integration of words and music. At some point on this blog, we need to tackle the topic of serendipity...)

Karin--last week praye, this week, canta...I would say serendipity indeed! Or a really savvy program that's messing with us!

Break that down even more and you have canta being close to chant, or enchant, which could be related to ritual words or songs, or even beyond that, you have the Spanish phrase "me encanta", which relates to love. Or quite literally, "you have enchanted me." Where you have song, magic, and love all entwined.

My capcha was "oboolo". I'm not even sure that's a real word.

haha! Yes, I definitely feel a serendipity post coming on; even if oboolo doesn't quite fit the pattern...