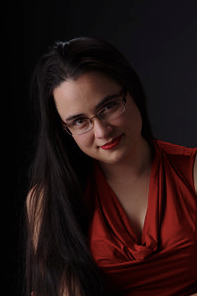 For our Heroines of Fantasy post number 99(!) please welcome Rosamund Hodge. You may not have heard of her yet, but you will soon!

Rosamund Hodge grew up as a homeschooler in Los Angeles, where she spent her time reading everything she could lay hands on, but especially fantasy and mythology. She got a BA in English from the University of Dallas and an MSt in Medieval English from Oxford, and she now lives in Seattle with seven toy cats and a plush Cthulhu.

Her debut novel, Cruel Beauty, will be published by Balzer + Bray/HarperCollins in January 2014. For more information, visit her website.


The title of this post is a lie. I do not have a favorite female character, because that's like comparing apples, oranges, quadrilaterals, kittens, the Milky Way, and bicycles.

But I do have a standard answer to the question "Who is your favorite female character?" It's Yue from the TV show Avatar: the Last Airbender, and let me tell you why.

I've always loved reading stories about other worlds, whether they're the imaginary worlds of science fiction and fantasy, or whether they're the stranger-than-fiction worlds of the past. And I've always loved reading stories about women, especially women who have adventures. But I've read a lot of stories that combine those two things in this way:

SOCIETY: I am Ancient Greece, or Medieval Europe, or Fantasyland. The point is, women are dumb and should stay in the kitchen.

HAPLESS FEMALE: I am the heroine's best friend--or sister, or mother, or personal enemy. The point is, I accept my culture's sexist beliefs and so I have the inner life of a potted plant. Learn from my example, girls!

HEROINE: I am the main character and therefore I don't understand why women can't do all the things that men can do. I am going to rebel and change the world! Learn from my example, girls!

Last year I read The Palace of Illusions by Chitra Banerjee Divakaruni, which is a retelling of the Mahabharata (one of the great epics of ancient India) from the viewpoint of Draupadi, the princess who becomes the cause of a cataclysmic war. It's an excellent book that I would highly recommend. But it really bothered me that in the early chapters about Draupadi's childhood, there's a big deal made of how she chafes at the restrictions her society places on women--and then that thread is dropped as soon as the action starts. It feels like it's in there just to signal that we're supposed to like her, that Draupadi is a strong female character who deserves to be the heroine because, in the really important ways, she's just like us.

Because women are people. Even women who belong to a scary, alien, sexist culture and completely accept its ideals are people. And people's stories are always worth telling.

And also? Women who don't question their societies--at least not in the way that we would question them--can still do really amazing things. Just look at history! 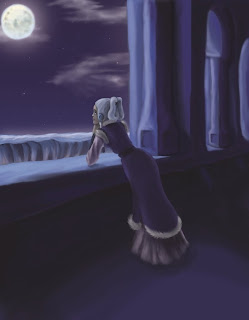 Which brings me back to Yue. (Spoilers for Season 1 of Avatar follow.) She's a princess of the Northern
Water Tribe, a culture that is fairly sexist--though both men and women are able to waterbend (i.e. use elemental magic), women can only use their powers for healing, while men are trained to fight. Yue is further restricted by her status: for the good of the tribe, she has an arranged marriage to a boy she doesn't like.

Then the main characters turn up. One of them--Sokka--falls in love with Yue and wants her to run off with him. And if Yue were the heroine of a hundred other modern American fantasy novels, she would. She would have an epiphany that her people's customs were unfair, she would reclaim control of her life, and she would run away with Sokka and maybe learn to sword-fight as well.

But Yue doesn't do the modern American thing. She doesn't listen to the cute boy. She sticks by her culture and her beliefs. Even though she loves Sokka, she thinks it's her duty to keep her engagement, so she refuses him. And when the Moon Spirit is killed, and she realizes that she can sacrifice herself to become a new Moon Spirit--due to being touched by the spirit's power in childhood, which again is something she did not choose--she does it. She lays down her life because nothing will stop her from carrying out her duty. Not even the boy she loves begging her to stop.

The narrative makes it clear that Yue is not just a helpless victim of patriarchy or fate. She doesn't have many choices, but she owns those choices. And she saves the world in doing so.

I love your analysis of the subtext in these stories! I'm not a fan of what Romance readers call "wallpaper Historicals": stories supposedly set in the past, but with very modern heroes going head to head with decidedly old-fashioned villains or norms. The narrowness of such a vision always frustrates me.

I had similar thoughts, a while back, while doing edits for one of my novels. The heroine isn't that contemporary kick-ass woman who vies against society and fights the good fight. She's a different sort of character, and one I likened to Melanie Wilkes (Gone with the Wind.) Scarlet is kick-ass. Melanie is not--on the surface. But she is a strong female character--strong in a softer way, but still just as strong, of not stronger, than Scarlet.
(And Scarlet's "strength" can be quibbled with, but that's for another day!)

I love those kick-ass women filling so many books. I also like those who, like Yue, are strong in more subtle ways.

Then I'm sensitive. Ever since the day when I got a story critique that my heroine saved the day by sewing, which must make her weak.

Mary...what, what, what?? Weak because she saved the day by sewing? That's insane. I suppose the critter never read Solstice Wood by the venerable Patricia McKillip, eh?? Egads, that's just terrible. I think it sounds intriguing.