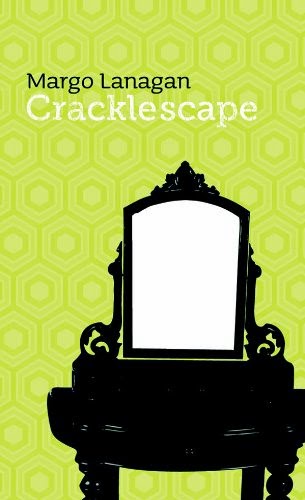 Hi all, Julia here, coming to you a second time with a review of Cracklescape, an ebook collection of 4 short stories by award-winning Australian author Margo Lanagan that I picked up at World Fantasy Convention in Toronto back in 2012. I first heard of Margo Lanagan back in 2009 when I attended the World Fantasy Convention in San Jose. At that time, her book Tender Morsels won Best Novel in the World Fantasy awards, and I read it and was completely blown away by it. So when I had an opportunity to read something else by Lanagan, I was really excited (even though yes, it took me over a year to finally get to it...you should see my crazy TBR pile, it’s a looming threat to my bedside security. Good thing this one was an ebook). This collection is apparently part of a series of other books in the “Twelve Planets” series by Twelfth Planet Press, an Australian publisher of women-friendly speculative fiction--sort like of Hadley Rille Books’ Down-Under counterpart.

Anyway, enough intro, let me tell you about this collection.

There are four unrelated stories here. If anything does unify them, it is perhaps, as Jane Yolen says in the introduction, that they are all about ghosts or some kind of unreal being. But it is also, as Yolen points out, the lush poetry of Lanagan’s writing. Like any great poet, Lanagan’s language is evocative, perceptive, specific in its details—it is worth reading slowly, on a sentence-by-sentence level (if you can be that patient...sometimes I can’t be so I have to go back and read again).

The first story is “The Duchess Dresser”, about a young urban flat-dweller who finds his dresser is possessed by a female ghost from a previous era; she possesses him as well, and then appears to his flat-mates. I really liked the set up of the whole story, the gorgeous and vivid descriptions, and the relationships between both the main character and the ghost and the main character and his flat-mates, but ultimately I was frustrated with it because the story felt like it ended far too abruptly and unsatisfyingly. We never found out who the ghost was or why she was there or what ultimately happened to the main character and his flat-mates....for a few minutes there I actually thought I might have gotten an incomplete book, it ended so mid-stream.

The second story is my favorite of the collection: “The Isles of the Sun”, about a boy named Elric (no, not of Melniboné) who sees beautiful golden aliens and winds up leading the kids in his small town to follow them to another, lighter, world. I loved Elric’s insistence on The end of the story really hit me in a personal way when it switched point-of-view to the boy’s mother, who discovers her son missing early one morning and follows his tracks just in time to watch all the kids seemingly disappear. Though she doesn’t encounter the grim disaster she expects, she still loses her child in a way that makes no sense—and Lanagan really made me feel that parental loss and despair and confusion.

The third story, “Bajazzle”, is the most “horror”-genre story of the collection, about a self-centered, self-righteous, sexist pig of a man we first encounter on a train with his wife on his way to a beach party. He definitely gets his comeuppance in a very creepy and graphic way when he encounters a succubus at the party, and Lanagan’s description of the whole encounter (complete with freaky tikis) is really hard to scrub out of your brain. This story also felt not completely successful to me because the first part (on the train) and the second part (at the party/with the succubus) were so different and didn’t seem strongly related enough to me. Howeer, to Lanagan’s credit, I was so happy just wallowing in her language and the sheer “ewww” factor of the fantastical elements that I didn’t mind.

“Significant Dust”, the last story in the collection, was about Vanessa, a young woman out on her own trying to make sense of her life and her traumatic past by living out on the edge of nowhere, and the area 51-like alien encounters that start to happen there. It was my second favorite story, though I felt like it too suffered from a rather abrupt ending just when things started to get interesting. The speculative element was very light in this story, definitely serving as more of an intriguing mysterious background to Vanessa’s own unfolding backstory, which was beautifully drawn and compelling.

This is definitely a collection to pick up if you love gorgeous prose with a dash of the fantastical. It definitely made me want to pick up some of Lanagan’s other story collections (Black Juice won some World Fantasy awards also, apparently). I’m also intrigued to try some of the other Twelve Planets series from Twelfth Planet Press. I’ll have to get that TBR pile down to a reasonable level first...nah, why wait for something that’ll never happen? :)
Posted by Heroines of Fantasy at 7:00 AM

Sounds like a great read, Julia! Thanks for the recommendation.

Hahaha! Yes, Julia--no matter how hard we try, that TBR pile NEVER goes down. I've added a few just from this review page. Sigh...the live or a reader is a hard one. ;)