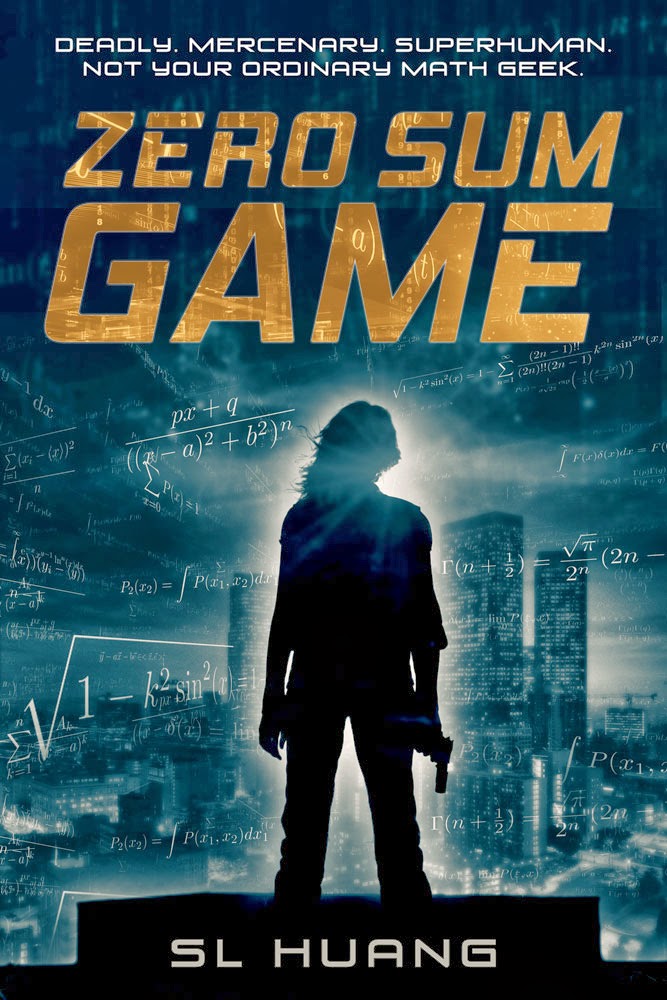 The vector calculus blazing through her head lets her smash through armed men twice her size and dodge every bullet in a gunfight. She can take any job for the right price and shoot anyone who gets in her way.

As far as she knows, she’s the only person around with a superpower . . . but then Cas discovers someone with a power even more dangerous than her own. Someone who can reach directly into people’s minds and twist their brains into Moebius strips. Someone intent on becoming the world’s puppet master.

Someone who’s already warped Cas’s thoughts once before, with her none the wiser.

Cas should run. Going up against a psychic with a god complex isn’t exactly a rational move, and saving the world from a power-hungry telepath isn’t her responsibility. But she isn’t about to let anyone get away with violating her brain — and besides, she’s got a small arsenal and some deadly mathematics on her side. There’s only one problem . . .

She doesn’t know which of her thoughts are her own anymore.

I’ve been reading SL Huang’s blog for a while now. It’s interesting, intelligent and opinionated, and so I’d marked her first novel as something to look out for, curious to see how her writing translated into a longer form. The pitting of author's skill against reader's attention is not a zero sum game: if a book is good, both are winners. Nor are the stakes equal for the two sides. They're far higher for the author: there's a lot of books to choose among and so major tests for any one are Can it keep a reader reading? and Would you recommend it to a friend?

Well, Zero Sum Game passes both tests with flying colours. As escapisms go, I’ve found few better recently. The prose is crisp. The characters are finely drawn. And diverse (which ought to be a given but, sadly, isn’t). The pace is relentless, never letting a reader pause for breath. Onwards! it demands, effortlessly upping the ante, and, onwards, I rushed, breathless, through the story. I read this book in a single, four-hour session. The one time somebody tried to interrupt me, I snapped out something very short and pithy to the effect that I was reading and would they please leave me alone until I was done. Only, you know, rather less polite.

It’s a thriller, with sf overtones. Cas Russell has what I can only call a synaesthetic sense of mathematics; she views the world through a veil of numbers, vectors, equations and this allows her to instantly extrapolate trajectories, angles of incidence, forces and so on. This ability, coupled with her high intelligence, preternatural reaction times, near lack of physical fear and apparently unlimited access to firearms, makes her exceedingly dangerous. Whether Cas's abilities are innate or the result of modification by person or persons unknown is unclear; my money’s on the latter. She also has no past, no family and no curiosity about these lacunae: this is the first in a series and seeds of a longer plot arc are scattered in the text. Her closest associate is Rio, a man to whom murder and mutilation come as easily as numbers do to Cas. Cas works in ‘retrievals’; when a woman hires her to recover her sister from the clutches of a drug cartel, her path crosses with that of Arthur Tresting, a private investigator hired by a woman to find her husband’s murderer. And we're off into a rollercoaster of a plot.

I’m not a mathematician so I just sat back and let the maths wash over me in a pleasing torrent of words and effects; I hugely admired Huang’s verbal dexterity at depicting Cas’s numerical vision of the world. The effect was exceedingly enjoyable; akin to watching Sherlock, when the camera shows you Holmes’ vision superimposed upon the world. I recognised references, of course, but, although I can solemnly swear an intimate, intuitive understanding of mathematics is not required to enjoy Zero Sum Game, I suspect there are bonuses and Easter eggs a-plenty for those who have it. It’s also deeply satisfying to read a book which glories so in its characters’ intelligence: every superhero demands a supervillain and, in the power-hungry psychic, Cas might just have met her match. Both sides are clever; both are having to work against the other’s cleverness. But it’s not just their brains they’re using: there are also lots of guns.

And it is an extremely violent book – think Hollywood blockbuster. Lacking Cas’s sense for figures, I soon lost count of the bodies. It’s the same sort of violence as in a blockbuster and, because it is so over the top, as hard to take seriously. More disturbing, perhaps, is the acceptance of that violence, both her own and Rio’s, by Cas. Your opinion may differ. I’ll just mark that the shades of grey in this book are very dark indeed. Within the story, I rather suspect there is more to Cas’s acceptance of Rio than she is herself aware of; there are aspects of her relationship with him which echo her response to the psychic. I hope I’m right, because, on reflection, I find the alternative reading depressing.

You’ll have noted it wasn’t a reservation which stopped me from reading and enjoying, or holds me back at all from recommending. Moral ambiguity is as old as storytelling itself. For me, Zero Sum Game worked because it did what it set out to do extremely well: it tells a gripping story building to a highly satisfying conclusion. It’s an absolutely cracking read. I could suspend both disbelief and lack of sympathy because of the quality of the storytelling. And that is the one rule of writing: Do it well and you’ll carry the reader with you in spite of themselves. To that extent the title is a misnomer: I reckon both author and readers are winners here. The sequel can’t come a day too soon.

On the face of it this isn't a book that would attract me at all—maths is Greek to me and gunslinging heroines don't usually grab me either. But after a review like that I am thoroughly intrigued and will definitely read it.

My interst was caught when I read it was a sci-fi thriller with a female heroine, since that is what my latest is. I hope I can do as well as this author in holding the audience. The idea of being great at math enabling the dodging of bullets seems a bit extreme to me, but the rest sounded interesting.

Wow, the review alone was intense!

Awesome review, Harriet! I will probably avoid this one as the violence sounds like something that would get on my nerves sooner rather than later. But I love the premise, and it's great to see a book that features a mathematical heroine. :)