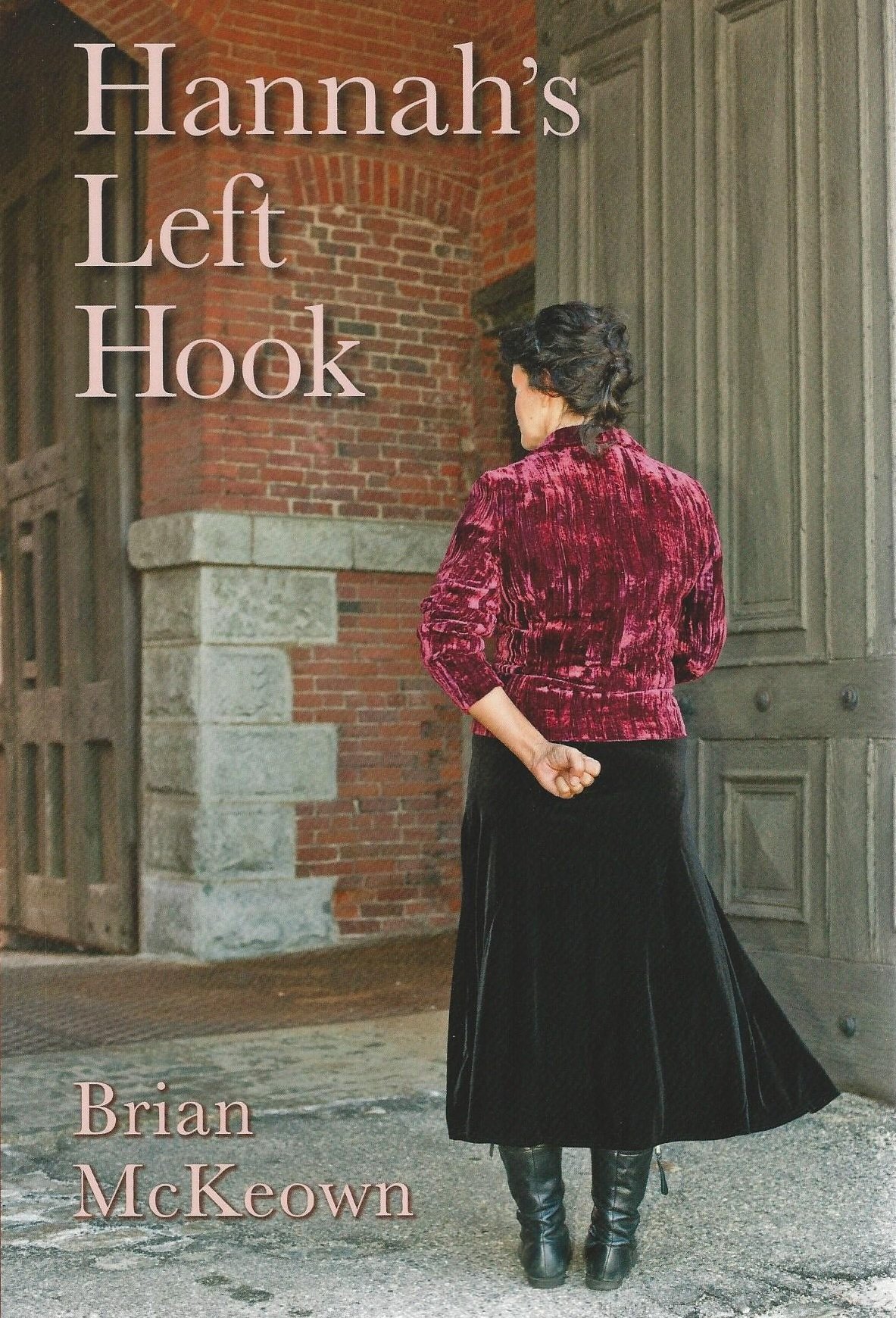 Through countless scrubbings of St. Lawrence's Church floor, a poor washerwoman develops a devastating left hook. During the Great War she persuades the Birkenhead Shipyard to hire her as its first female laborer, beginning her transformation into a working-class legend. Set in northwest England, Hannah's Left Hook is a story of survival, feisty determination, and the occasional black eye. Whether it's a butcher who thumbs the scales, a foreman who exploits female shipyard workers while their husbands and brothers fight the Great War, an agent provocateur who escalates the food riots of 1932, or a sargeant who drafts under-age boys during WWII--Hannah's left hook strikes to defend the rights of the unemployed and oppressed.

Hello, Cybelle here again with the Wednesday review. As the centenary of the First World War approaches, I've been thinking about my grandfather with great frequency. He was born in Chester, England in 1900 and, like many young men of his generation, lied about his age in order to join the war effort. His first attempt to enlist took place in 1914. By all accounts, my great-grandmother marched down to the recruitment office and brought him back. The next year, however, he managed to enlist in the Welsh Border Mounted Brigade Field Ambulance, where he served for a little over a year before being transferred to the Royal Flying Corps. Luckily, he made it through the war in one piece, perhaps most importantly with his sense of humor in tact. He came to the U.S. in the 1920s and became a doctor. Meanwhile, back in Chester, the rest of the family carried on with their lives in a stoic fashion, even as the next war approached. Family anecdotes abound about the Blitz, particularly my great-grandmother's premonition that the family had to move to a new house. Everyone thought she had lost her mind, but she insisted. A month after the move, the old house took a direct hit in an air raid; nothing but a crater remained. These stories have always fascinated me, and I've often admired my English relatives' ability to find a reason to laugh even in the darkest of times.

It's not surprising then that I was drawn to read Hannah's Left Hook. It's set in the nearby, but considerably poorer, city of Birkenhead during the First and Second World Wars and follows the struggles of a working class woman trying to protect her family during those difficult and frightening years. I must say, I fell in love with the heroine, Hannah the Hammer, from the first page! She's a beautifully developed female character of Irish Catholic descent, who has had to be strong from a young age. After her father's death, she is left to provide for her younger siblings and blind mother. Out of desperation, she marries an abusive alcoholic because he has a steady job. The story truly begins in 1916, when Hannah's husband returns from the war on shore leave and makes the dreadful mistake of assaulting her mother to steal her money for beer. In a rage, Hannah tracks him down to a local pub and unleashes the secret power of her left hook. As her fist connects with her husband's face, Hannah experiences an exhilarating moment of freedom that changes her life forever. When her husband is killed at sea a few days later, Hannah has a good cry--out of concern for her children--and then looks for work at the shipyard, where her strong left arm comes in handy. Over the years, Hannah's fist makes a number of shocking appearances, but only in the most justifiable of circumstances.

The author, Brian McKeown, was born in Birkenhead and raised by working class parents. His respect for the people of the city is obvious, and he must have grown up with many anecdotes about the wars and hard times. Indeed, a number of episodes in the novel greatly resemble stories I grew up with. His style is engaging and offers a realistic portrayal of the effects of war and poverty on ordinary families. McKeown's novel is both humorous and poignant and explores a range of personalities from meek and mild to fiery hot. I highly recommend it--one of the most enjoyable reads I've had in a long time!

Posted by Heroines of Fantasy at 11:36 PM

This looks like a really great read. Thank you, Cybelle! And Brian McKeown.

Thanks, Cybelle, for another great review. This one looks like a must read. :)

Hearing about your grandfather makes Hannah's story even more meaningful.