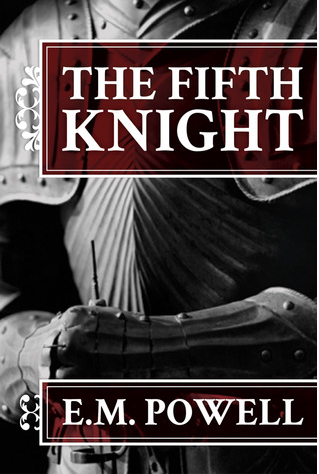 THE FIFTH KNIGHT, E.M. Powell’s debut medieval thriller, reached #1 on Amazon and with good reason.
The Fifth Knight is an “intimate” thriller, which focuses on a handful of characters, good and bad, that you get to know very well, instead of dozens as one might find in continent or globe spanning thrillers, historical and contemporary. Being so delightfully focused, The Fifth Knight does not require an extensive dramatis personæ for the reader to keep track of, who works for whom or who begat whom. This allows for excellent character arcs and, in the case of the villains, character(less) revelations.
Speaking of villains, Powell’s main antagonist, Sir Fitzurse has the three “Rs” one always wants in a thriller – he is resourceful, relentless, and ruthless. His mission is allegedly to Arrest Archbishop Thomas Becket and abduct the mysterious Theodosia, a young naïve anchoress who has spent most of her life willingly dwelling in a prison-like cell as she strives to make herself worthy to serve God as a nun. The arrest goes awry and, as we know from history books, Thomas Becket is killed.
Sir Fitzurse’s scheming was nearly flawless, his only mistakes being the enlistment of Sir Benedict Palmer and allowing the young knight to hear of the diabolical torture that Sir Fitzurse has planned for Theodosia. Though desperate to receive the pay that Fitzurse promised, Palmer’s conscience won’t allow him to be a party to Fitzurse’s evils. In fact, Palmer aids Theodosia in making a daring escape.
Romance blossoms between the headstrong anchoress, Theodosia, and the tarnished knight, Sir Palmer, as they are forced to their wits’ end to elude capture by Fitzurse and his minions. All the while, they struggle to determine the secret Theodosia unknowingly holds. The hope is that learning the truth that Fitzurse so desperately desires just might save them.
The Fifth Knight is highly recommended for those who want a thrilling read with protagonists you can root for and watch grow.
THE FIFTH KNIGHT AT AMAZON
E.M. POWELL’S WEBSITE
E.M. POWELL ON FACEBOOK
E.M. POWELL ON TWITTER
Review by Carlyle Clark for Heroines of Fantasy
Posted by Heroines of Fantasy at 4:51 PM

Wow! This sounds like an awesome book, Lyle. Thanks again for another insightful review.