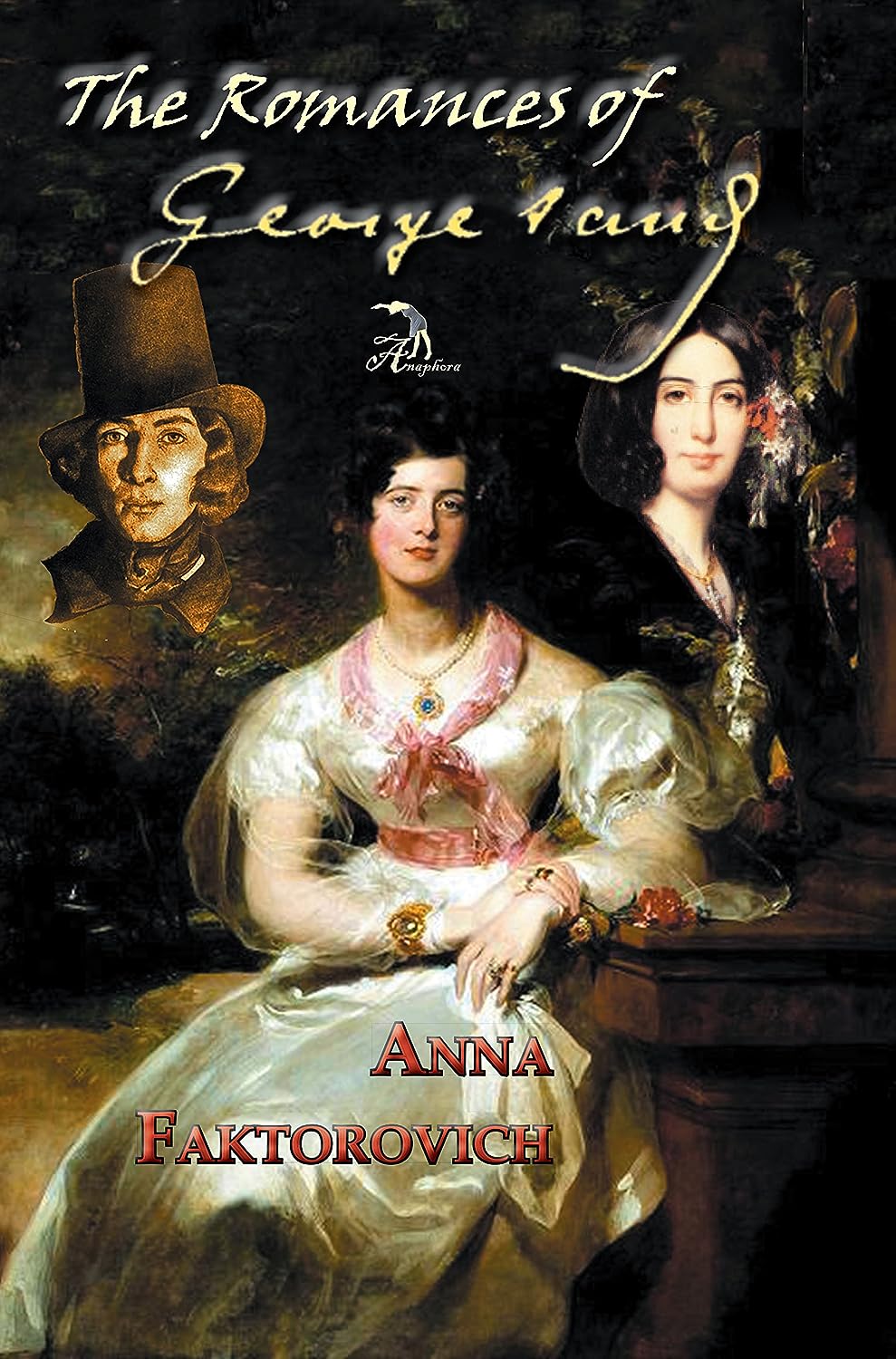 Title: The Romances of George Sand
Author: Anna Faktorovich
Publisher: Anaphora Literary Press
Publication Date: 2014
Genre: Historical Fiction
Price: $2.99 ebook, $14.00 paperback
Where to Purchase: Amazon
Reviewed by: Cybelle Greenlaw
Description: The Romances of George Sand takes the heroine from a childhood in the aristocracy amidst the Napoleonic Wars, to an unhappy early marriage and eventual divorce, to her careers as a country doctor, pharmacist, lawyer, and most successfully as a romance novelist. This is a story about the revolutions in a woman’s heart as she goes through dozens of love affairs. It is also about George’s involvement in violent, political revolutions of her time, including the July and June Revolutions and the 1848 Revolution; in the latter, she served as the unofficial Minister of Propaganda. The story is full of military battles, coup d’etat maneuvers, duels, malevolent plots, infidelity, artistic discussions, monumental legal cases, and reflections on the nature of love, family, romance, rebellion, and femininity. The history behind each of the events depicted is researched with biographical precision, but liberty is taken with some events that have been contested by historians, including the lesbian affair George had with Marie Dorval and the identity of the real father of her second child. Students of literature and history will recognize many of the central characters, as George befriended Napoleon I and III, Alexander Dumas pere and fils, Frederic Chopin, Alfred de Musset, and a long list of other notables.

Good morning! Cybelle here again with the Wednesday review. This week, I read The Romances of George Sand. The author, Anna Faktorovich, is also the founder of Anaphora Press and holds a PhD in English literature. I was excited to read the book. George  Sand, born Aurore Dupin, was the greatest woman writer of the Romantic Period, and her life has always fascinated me. However, this novel just didn't quite deliver. In the introduction, Faktorovich emphasizes that it is a work of fiction based closely on Sand's autobiography and known facts about her life. I found this explanation to be necessary because the book has much more in common with a biography than a novel.

The first three chapters concern the life and times of Sand's grandmother and parents. She doesn't appear until chapter four. In places, the phrasing is so confusing that it was difficult to understand who the author was describing. A glaring example of this tripped me up in the first chapter: These events untraveled a couple of months after Aurore's wedding to Dupin, and in a few months her only child, George Sand's father, Maurice Dupin, was born, and nine months after this M. Francueil died in 1786, leaving a ruined estate to his wife and young son.  For most readers, this would also be the first major indication that the Aurore introduced in the first few pages was not, in fact, George Sand but her grandmother, also called Aurore Dupin.

For those interested in the period, the author does a good job of creating historical context, but too much attention is devoted to the personal life of Napoleon Bonaparte. Faktorovich struggles to demonstrate a number of parallels between events in the emperor's life and those in Sand's family. A few of the examples work, but most are forced and unnecessary. It would have been more effective to concentrate on the direct impact his actions and regulations had on the family.

My main complaint against the book would have to be the multitude of missed opportunities. The period and people represented in the novel are fascinating in and of themselves. However, Faktorovich doesn't effectively bring them to life. Instead, the characters are subjected to long passages of speculation about their motives, along with paragraphs in which the author seems to be expressing her own (rather stereotypical) views about relationships. This happened so frequently that I found myself yelling, "Stop guessing what happened and show me!" After all, what fun is a historical novel if the author cannot commit to a character's motivations and actions? The caveat has already been given that we are reading a work of fiction.

I'm very sorry that I could not give this book a more positive review. It is clear that Faktorovich has conducted considerable research on the period and is committed to depicting the characters in a truthful manner. To give her credit, some of the problems I've described may have been the result of attempts to imitate the often rambling musings of Romantic writers. Unfortunately, the style just doesn't work that well in a modern novel.  With a few tweaks, though, it could be an excellent work of creative non-fiction.

Posted by Heroines of Fantasy at 9:11 PM