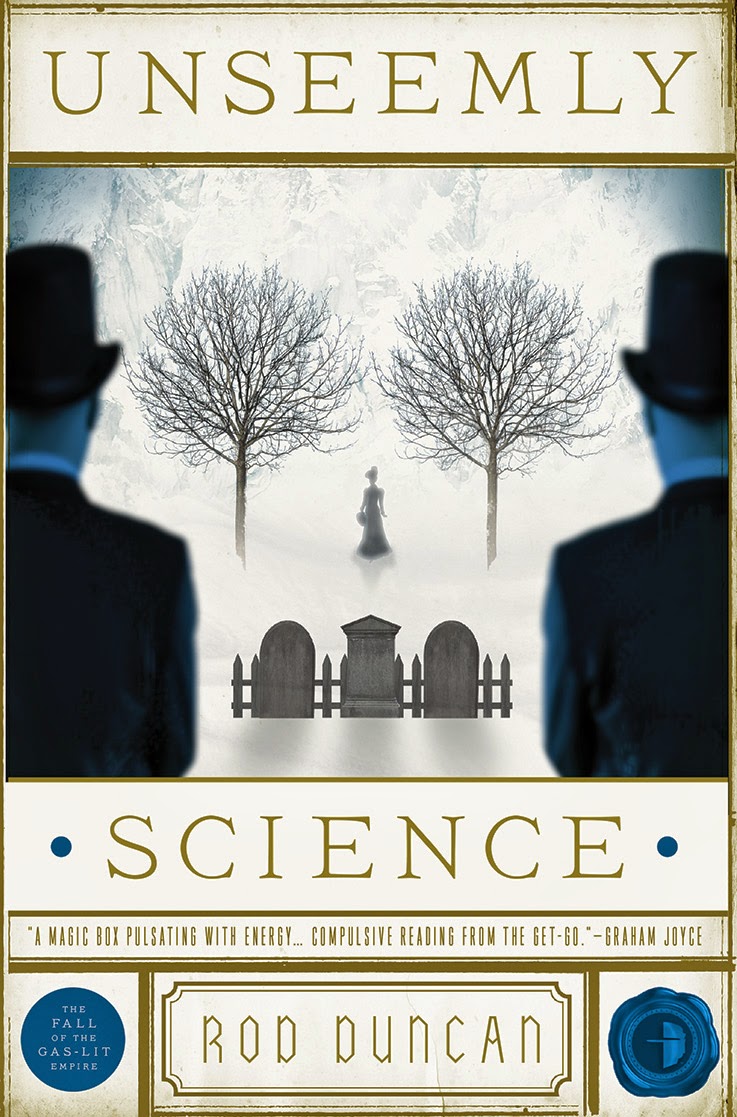 In the divided land of England, Elizabeth Barnabus has been living a double life – as both herself and as her brother, the private detective. Witnessing the hanging of Alice Carter, the false duchess, Elizabeth resolves to throw the Bullet Catcher’s Handbook into the fire, and forget her past. If only it were that easy!

There is a new charitable organisation in town, run by some highly respectable women. But something doesn’t feel right to Elizabeth. Perhaps it is time for her fictional brother to come out of retirement for one last case? Her unstoppable curiosity leads her to a dark world of body-snatching, unseemly experimentation, politics and scandal. Never was it harder for a woman in a man’s world…

Unseemly Science is set in an alternative version of Britain where the mainland has been partitioned into a Republic (northern England and Scotland) and a Kingdom (the rest of England and southern Wales) with the border running through the English Midlands. It’s the sequel to The Bullet-Catcher’s Daughter and several characters from that book return. The story opens in the divided city of Leicester, best known in fiction as the birthplace of Adrian Mole. It’s a steampunk/alternate history novel, thus although set in 2009 the technology, dress and social codes are sort-of-Victorian, with airships. The heroine is Elizabeth Barnabus, an intelligence gatherer from the Kingdom living in the Republic. Although in the Kingdom women can own businesses and attend university, the rights of Republican women are severely curtailed and thus Elizabeth operates double personae, being both herself and her ‘brother’, Edwin. But the Kingdom is little better, and Elizabeth’s exile has been forced on her as the only means of escaping the Duke of Northampton, to whom she’s bound by forced indentures granted by a corrupt court. I doubt he wanted her services as parlourmaid.

As the book opens, a treaty of extradition that would force Elizabeth’s return to the Duke is looming between the Kingdom and Republic; the philanthropist, Mrs Raike, is organising aid for the deserving poor, raising male eyebrows as she does so; and quantities of the ice produced by the ice farmers of Derbyshire are disappearing. Julia, Elizabeth’s friend and pupil, goes to assist Mrs Raike and soon Elizabeth (and Edwin) is manipulated into investigating the ice thefts, trading intelligence gathering for protection against extradition.

There’s much to enjoy here. The snippets at the chapter heads from two, contrasting in-world texts deepen the background of the story. This particular alternate reality is fascinating: the industrial revolution never happened, law and technology are regulated by the International Patent Office and the temperatures in the hills above Derby are consistently below zero for four months of the year. There are also nods to classic detective fiction, as when Elizabeth reminds Julia, You know my methods. Although the Kingdom and the Republic have been separate countries since 1819, their politics and self-interests are tightly entangled and corruption is rife on both sides of the border. They are nicely balanced too: one an oligarchy permitting female education and emancipation but imposing the death penalty and forced servitude, the other a limited democracy whose populace is free, but severely constrained by social mores and containing, apparently, a large number of near starving destitutes. Reader: which would you prefer?

Elizabeth is brave, competent and extremely resourceful, and her background in the Circus of Wonders has given her all sorts of useful skills. She’s a strong, active heroine, who is certainly not constrained by the limitations of Republican society. Indeed she can play its expectations to her advantage. People, she knows, see mostly what they expect. She, however, is an adept at misdirection. Nor is she the only character playing a part. Indeed there’s a theme of sleight of hand running through the book. Elizabeth recognises at first sight that Mrs Raike is not what she seems. The villains too are masters of misdirection and subterfuge, hiding their deeds in plain sight (a satisfying number of clues are scattered like breadcrumbs through the text) and between the lines of an accounting ledger. Even Elizabeth’s one powerful ally, John Farthing, an agent of the Patent Office can’t act openly, for all medical research is deemed for the greater good and hence, by definition, seemly.

For two-thirds of the book the pace is fairly sedate, as situations, characters and plot threads are introduced. Then a package is delivered, the various gears engage and the pace quickens. The final third reads like a satisfying cross between thriller and gothic horror. I found the characterisation rather flat: Julia, for example, never quite came to life in my eyes. Elizabeth herself, the first person narrator, maintains a distance between the reader and her adventures that extends even to her closest friends. Part of this is, I think, deliberate: the book is set in an imagined age more formal than our own and this formality is reflected in the language. The most vivid characters are those from the Kingdom: the lawyer Yan Romero in particular, whose talk of pianos (metaphorically) falling from the bookends the story beautifully. He brought a spark to the page, and struck one from Elizabeth.

Such reservations aside, I enjoyed reading Unseemly Science. Books work on several levels. A good story is complete in itself yet, at the same time, reading is a dynamic process: readers are not passive consumers of words. I've no idea what Duncan intended when writing, other than to invent a world and tell a story. Yet, for this reader at least, the subtexts and resonances of a divided Britain run by capricious aristocrats and politicians with vested interests were as entertaining as the story. It's worth a look, and I'll keep an eye out for the next instalment.

Also, do spend a moment looking at the cover. That’s what attracted me to the book in the first place. Now, having read it, I can see what a subtle, clever illustration of the story it is.

Posted by Heroines of Fantasy at 3:00 AM