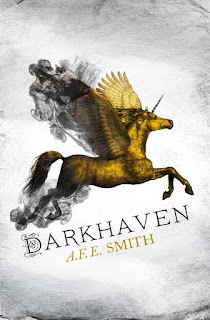 First, full disclosure: I’ve known AFE Smith for several years now and count her as a friend. Over those years we’ve read and discussed some our unpublished work (not Darkhaven, though, nor After the Ruin), and recently I took part in her online booklaunch and giveaway. She’s said some very kind things about After the Ruin. For all these reasons this isn’t one of my regular reviews, which is why it’s coming outwith my usual first Wednesday of even-numbered months slot.

Ayla Nightshade never wanted to rule Darkhaven. But her half-brother Myrren – true heir to the throne – hasn’t inherited their family gift, forcing her to take his place.

When this gift leads to Ayla being accused of killing her father, Myrren is the only one to believe her innocent. Does something more sinister than the power to shapeshift lie at the heart of the Nightshade family line?

Now on the run, Ayla must fight to clear her name if she is ever to wear the crown she never wanted and be allowed to return to the home she has always loved.


Florentyn, the firedrake lord of Darkhaven, despises his daughter, Ayla, because when she Changes she takes an unpure form (an alicorn; see the book cover). He despises her half-brother, Myrren, too, because he can’t Change at all. When, one night, a priestess is attacked in her temple by a shapeshifter, Ayla’s father charges her with the crime and orders that she be locked away. But Myrren frees her, bidding her hide in the seven-ringed city of Arkannen. And then Florentyn is killed by the same creature that attacked the priestess. Ayla, the only shapeshifter known in Darkhaven, is the sole suspect. Just because she is her father’s heir doesn’t mean she is safe from his harsh justice. Myrren needs to prove his sister’s innocence before the city guard capture her and impose Florentyn's sentence of life-long incarceration.

Darkhaven is fast-paced and exciting. Myrren teams up with the priestess to track down the murderer and clear his sister’s name, while, in parallel, Ayla herself joins forces with the disgraced Helmsman Tomas Caraway to find out the truth. Each soon discovers that Florentyn had been keeping secrets from both his children, secrets that Captain Travers of the Helm will stop at nothing to protect. His loyalty is to the Nightshade line, not to any individual Nightshade. Ayla, Myrren and Caraway all have to come to terms with what they are and with each other, even as they uncover the secrets Florentyn left behind, and Travers is keeping. It’s a thrilling read with kidnappings, swordfights, carriage chases… Nary a dull moment.

You’ll see from the cover and my summary that Darkhaven is very much a fantasy novel. It’s fairly low key fantasy: shapeshifters aside, there’s no evidence of magic and a fair amount of technology of a steampunkish variety. But it is certainly a fantasy novel, a high octane, action packed fantasy novel, and most of the reviews I’ve read discuss it as such. What I’d not expected when I opened it up was to find the structure of a classic whodunit mapped neatly onto the fantasy. I’m therefore going to take the shapeshifting abilities of the lordly Nightshade family as a given and point out instead the fact that it’s a locked room whodunit and owes as much to Agatha Christie as to Tolkien or Wynne Jones.

The most important aspect of the whodunit is the victim. It’s rare for the victim to have many redeeming qualities, because if they did not enough people would wish them dead for there to be the wide range of suspects necessary. Also, the victim, when alive, almost always had power over the rest of the characters, forcing them to live according to their will. There’s order at the beginning but it’s an order built out of coercion. This order collapses with the murder, just as an archway collapses when the keystone is removed. And, during the search for the culprit, other truths are revealed: all that has been hidden becomes plain. Thus, at the end, when truth outs and the murderer is revealed, a new order is established. Importantly it’s not a return to the status quo ante: the new order is based upon truth rather than power, choice rather than force. It’s no coincidence that most whodunits have romantic subplots and end with lovers united as well as murderers condemned. It’s a strangely moral form of fiction, moving from darkness into light.

Darkhaven hits every one of these beats. Although it is a fantasy it doesn’t attempt to subvert the form of the whodunit, playing a straight bat along the way. Ayla has a strong motive to kill her father. So does Myrren. So, it becomes clear, do several other characters. Florentyn Nightshade is thus a classic whodunit victim: he’s a tyrannical father, a harsh ruler, an arrogant man who’d do anything, including forcing his children into an incestuous marriage, to maintain the Nightshade line. Anyone in their right mind would see the world is a better place without him in it. And his death, as with that of Roger Ackroyd, upsets the established order, leading to a period of instability and chaos. Importantly, however, this a whodunit rather than a grimdark fantasy, everyone in Darkhaven appreciates that it is necessary to apprehend the murderer, that just because Florentyn was the sort of chap who ought to be murdered doesn’t mean it’s right to do so. As I said, whodunits are moral: the victim’s character provokes the murder, the murderer’s nature is often revealed as the nobler of the two, but truth matters. This contradiction is underscored in the Golden Age crime stories by the number of times Poirot, say, or Wimsey, having revealed the culprit, enables them to escape or forestall justice.

The clues strewn along the way should be recognisable to any reader of mystery fiction, even if dressed up in the trappings of fantasy. There are three romantic subplots. And yes, a new, better order is established by the end (with enough threads left loose for a sequel). My only real quibble came with the nature of Travers’ intentions as he schemes to fill the power vacuum left by Florentyn’s death. The feel of the book is such that it’s plain he won’t be allowed to reach his goal. To have done so would take the story into a place it clearly wasn’t going to go, and this undercut the tension and excitement. Balance matters, and in my mind the balance was off there.

So, does it work, this blending of whodunit with fantasy? I’d say, on the whole, it does. Darkhaven is not as intricately plotted as a Christie or a Sayers but it is a wildly imaginative ride through the rings and gates of Arkannen. It’s an honest mystery: it’s perfectly possible to work out the solution from the text. What’s more interesting is that it is done at all. Too often now books are pigeonholed into individual genres: romance, mystery, thriller, high/low/epic fantasy. This is fine as a way of putting books into a place on a shelf but can too easily become prescriptive, a straitjacket for readers and writers. Darkhaven’s type of cross-genre straddling is to be applauded. It’s a fast, fun read that provides some points to ponder later (as I hope this discussion shows) and I’ll gobble up its sequel as soon as I can.

Oh, whodunit? Well, as Peter Wimsey was fond of remarking, When you know how, you know who.

I received a copy of the book from the publisher via NetGalley.