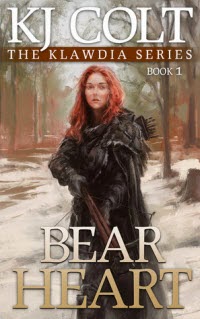 “Women serve men, and you must prove that you can be a man before you may lead.”

The Bear tribe have always ruled the Nation of Ruxdor, though with no male heirs to continue the line, Klawdia, the chieftain’s daughter and only child, must compete in a bestial rite of passage against four other tribal boys to retain her family’s sovereignty.

The competition is set amongst the perils of the Death Peak Mountains and pits representatives from Ruxdor's five strongest tribes—Bear, Lion, Wolf, Snake, and Hawgrald—against each other in a race to slaughter their tribe’s animal and return home. Each competitor is overseen by an opposing tribe’s elder to discourage dishonesty.

Klawdia is seriously injured by the bear she must slaughter, and a rival both saves her life and sabotages her chance of victory by cheating. When elders start disappearing from the competition, Klawdia must draw on the last of her strength to expose the truth and save her family’s lineage.

I really wanted to love this novel/novella just from looking at the cover it. What more can you want out of a cover than a girl with a crossbow? Unfortunately, Bear Heart had some problems. The first of which may be mine. It felt to me and other readers that this was actually a YA book though it doesn’t say that anywhere. Since I generally don’t enjoy YA please realize my criticism may not be apt to those who favor such fare.

Another problem is that the blurb covers about 90% of the book’s plot. Okay, maybe not precisely, but there aren’t any twists. What you expect to happen happens. It was unfortunate because there were a few places that appeared near perfect set-ups for a twist and yet no twist came.

Our heroine Klawdia is, of course is madly in love with, Skelkra, the heart-throbby badboy future leader of Wolf Clan and enamored with the idea that the two of them will marry and lead the clans to great prosperity. Also of course has no interest in, Jeykel, the sweetboy leader Hawgrald (a type of colossal bird) clan, though he is trapped in the throes of unrequited love for her and portrayed as the portrait of friendship and loyalty.

Bear Heart’s characters were not surprising, which made the plot is predictable. You’re never are shown a reason why Klawdia is if “fooled” as she calls it by Skelkra. Had there been some history where he had once been something other than what he obviously was, or if he even bothered to launch a sustained campaign of lying and manipulation, then maybe you could see how she was fooled since he was so hot and stuff, but there really wasn’t any of that. It was like watching the scorpion and the frog crossing the river story play out, except the scorpion gets to live and be king if he stings the frog yet the frog is still surprised. I mean Klawdia thinks they could rule together wonderfully while simultaneously knowing she and Skelkra have diametrically opposed visions for the clans and both are proud and stubborn and certain. She doesn’t seem at all fazed by this major dilemma or even notice it. That leads to another problem I had, which was that this was a contest to see who was fit to rule the clans and I wanted to root for Klawdia, but in my opinion she was not fit. Since Klawdia’s father was abusive, blamed her for her mother’s death birthing her, and always wanted a son not a daughter, had Skelkra been clearly modeled after him then, maybe, you could see how she could have been blind to his obvious faults because she was chasing after her father’s love, but they didn’t seem similar to me other than being jerks.

Now, the good part about Bear Heart is that it was well-written enough that I’m interested in trying Colt’s well-received Epic Fantasy series, The Healers of Meligna,  because some excellent writers don’t excel at the short form, however, I better encounter twists and surprises in the early going.

Judge the novel for yourself on Amazon: Bear Heart (Klawdia series Book 1) by KJ Colt