Wednesday Review: Shall We Not Revenge 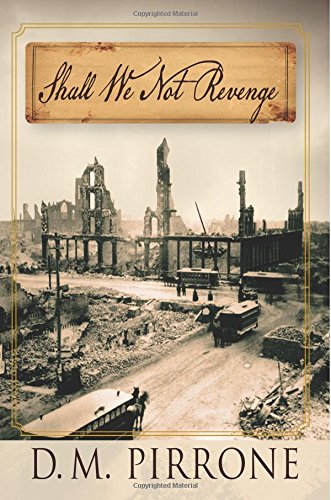 Title: Shall We Not Revenge
Author: D.M. Pirrone
Publisher: Allium Press of Chicago
Publication date: 2014
Genre: Historical Fiction
Price: Paperback $14.40; Kindle $6.99
Where to purchase: Amazon and Barnes and Noble
Reviewer: Cybelle Greenlaw
From the cover: In the harsh early winter months of 1872, while Chicago is still smoldering from the Great Fire, Irish Catholic detective Frank Hanley is assigned the case of a murdered Orthodox Jewish rabbi. His investigation proves difficult when the neighborhood's Yiddish-speaking residents, wary of outsiders, are reluctant to talk. But when the rabbi's headstrong daughter, Rivka, unexpectedly offers to help Hanley find her father's killer, the detective receives much more than the break he was looking for.

Their pursuit of the truth draws Rivka and Hanley closer together and leads them to a relief organization run by the city's wealthy movers and shakers. Along the way, they uncover a web of political corruption, crooked cops, and well-buried ties to two notorious Irish gangsters from Hanley's checkered past. Even after he is kicked off the case, stripped of his badge, and thrown in jail, Hanley refuses to quit. With a personal vendetta to settle for an innocent life lost, he is determined to expose a complicated criminal scheme, not only for his own sake, but for Rivka's as well.
Good afternoon! This week I had the pleasure of reading D.M. Pirrone's carefully researched novel, Shall We Not Revenge.  The author, a Chicago native, creates a vivid portrait of the city and its inhabitants in the months following the Great Fire. Much of the city has been brought to ruin. A variety of ethnic groups struggle to survive, and tensions run high among them. When Rabbi Kelmansky is found murdered in his synagogue, Detective Frank Hanley fears accusations could cause an escalation of hostilities.

Kelmansky's daughter, Rivka, discovered the body, and Hanley is immediately impressed by her determination and steady nerves. Against the wishes of her elders, Rivka volunteers to help Hanley, first as a Yiddish translator, then as an unofficial investigator in her father's murder. Hanley soon learns that the rabbi was well-known and loved even by those outside the close-knit Jewish community, but he hid a great secret even from Rivka. With the help of a few close friends, the rabbi had become a sort of Robin Hood, stealing supplies from the Relief and Aid Society to give to the poorest of the poor. The Aid, created to help victims of the fire, was run by prominent, extremely snobbish members of society, who frequently refused aid to those who most needed it, generally on spurious grounds of moral turpitude. The discovery of the rabbi's covert activity deepens the mystery of his death and opens the investigation to a range of suspects, including thugs from Hanley's checkered past and members of high society.

The book is highly engaging and moving. The overwhelming poverty and desperation of Chicago's newly homeless citizens is heartbreaking. One of the most memorable minor characters is a child selling souvenirs from the fire. Though starving and cold, the boy is reluctant to accept more than he asked for a pair of half-melted scissors. The reader can imagine his family's embarrassment at the prospect of asking for charity and how they must emphasized the virtue of hard work. Throughout the book, the city's poor manage to prove themselves more noble than the members of The Aid, and it is very difficult not to be angered by the injustices they are forced to suffer.

Needless  to say, I highly recommend this book. It's a well-constructed mystery in a gritty, historically accurate setting. The unusual partnership between Rivka and Hanley is touching and rather inspiring. Indeed, I very much hope there will be a sequel!

Posted by Heroines of Fantasy at 4:34 PM