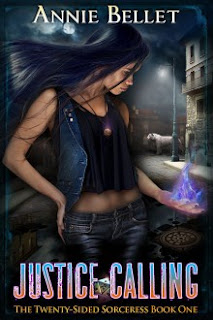 I first heard of Annie Bellet via this year’s Hugo brouhaha.  Ms. Bellet had a short story nominated, but, in her words, tired of being “both a conscripted player and also a ball” she withdrew from consideration.  Out of frankly appreciation, I bought Book 1 of her 20-sides Sorceress series.  It’s a good book.

Jade Crow, narrator, heroine and sorceress of the title, is enjoying a quiet life in (fictional) Wylde, Idaho, gateway to “The Frank” (Frank Church River of No Return Wilderness).  Jade, who’s of Indian descent, runs a game shop there, serving the local population of fae and college kids who populate the town.  She’s also hiding out from her ex-lover, a man who personally saw Julius Ceasar get stabbed, and who wants to kill her and eat her heart.  (That’s how sorcerers get more magic.)

Then a hunky blonde man walks in and says Jade is a murderer.  Oh, and he’s a Justice – the fae’s police, judge and executioner all in one.  Thus ends Chapter 1, and starts a very entertaining if alas too-brief romp in Bellet’s entertaining world.  Jade finds herself forced to make a decision – stay and help or run – and do so quickly.

Justice Calling is really a novella – only 121 pages – but terribly entertaining.  Jade Crow is very modern, and speaks fluent Geek, as do her characters.  I found Jade’s predicament believable, as were both her and the other characters responses to same.  Jade has some very useful magical powers, but she’s not invincible, and neither is anybody else.  This was really an entertaining romp, and at least in the paper edition, there are two chapters from Book 2 of the series – which I ordered immediately.
Posted by Heroines of Fantasy at 2:30 AM