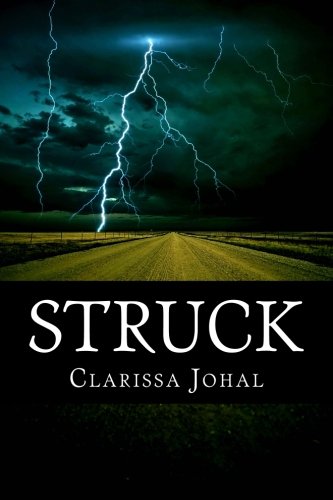 After a painful breakup, Gwynneth Reese moves in with her best friend and takes a job at a retirement home. She grows especially close to one resident, who dies alone the night of a terrific storm. On the way home from paying her last respects, Gwynneth is caught in another storm and is struck by lightning. She wakes in the hospital with a vague memory of being rescued by a mysterious stranger. Following her release from the hospital, the stranger visits her at will and offers Gwynneth a gift--one that will stay the hands of death. Gwynneth is uncertain whether Julian is a savior or something more sinister... for as he shares more and more of this gift, his price becomes more and more deadly.

Good morning, Everyone! Cybelle here with another Wednesday review. This week I had the pleasure of reading Struck by Clarissa Johal. I must say this was a great read, filled with suspense, humor, romance, believable characters, and downright scary moments. Gwynneth is a very realistic, down-to-earth heroine, who tries to find the best in everyone. Although emotionally vulnerable, she is far from weak and discovers her strength through her concern for others.

After surviving a lightning strike, Gwynneth begins receiving regular visits from the otherworldly stranger who rescued her, Julian. No one else can see him, but to her, he's very real and impossible to escape. He brings with him sinister, shadowy creatures that threaten to destroy anyone she cares for unless she lets him take something from her. What Julian takes, Gwynneth cannot identify, but the process is painful and creates a sense of deep loss. Through a new friendship with a mortuary beautician gifted with the ability to communicate with the recently deceased, Gwynneth begins to learn the identity of the mysterious Julian. Like her, he was once an artist, and through him, her passion for painting is reawakened. As Julian continues to use her, Gwynneth tries to protect her friends by isolating herself from them. Fortunately, her friends are persistent and loyal.

A fun aspect of the novel is the anticipation of a romance between Gwynneth and her childhood friend/roommate, Seth, a sexy man with a passion for cooking. Their mutual friend, Fenten, a charming gay man who loves Seth's skills in the kitchen, does everything he can to get them together. Along the way, the three friends encounter a number of fascinating characters and support one another in the fight against the mysterious forces attached to Gwynneth.

The book is fast paced and engaging, and I suspect most readers finish it in one sitting. While the atmosphere is dark, it is in no way gory. For readers who enjoy gothic horror and/or paranormal romance, this is a must read. I will certainly watch for more works by this author!
Posted by Heroines of Fantasy at 7:02 PM