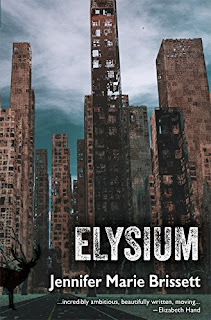 Hello HoF readers, and happy almost summer! Julia here, with a review of Elysium by Jennifer Marie Brissett. This is Brissett’s first novel, and it is one of those deftly written, “challenging” reads that made me love science fiction in the first place: the kind of book where you start off thinking “huh?” and wondering what the heck is going on, and by the end you’re thinking “huh!” and pondering interesting ideas that stay with you and grow ever more nuanced as you think about them more. Though there are many familiar sci-fi tropes in the book (alien invasion; post-apocalyptic scarcity; underground cities; winged warriors; virtual worlds that substitute for the real), the non-linear, kaleidoscoping way the story is told is what makes these all come together into something really unique and satisfying.

We start off in a relatively familiar place (modern day New York) with a small set of characters (Adrianne, Antoine and Helen) involved in relatively familiar relationship problems, but then the story keeps getting stopped and reset and rerun by what seems to be some kind of computer program or AI. Each new iteration of the story has echoes of what came before it, like a digital palimpsest that is never fully scraped away and so shows through in spots.  The characters shift genders (Adrianne becomes Adrian; Antoine becomes Antoinette; Helen becomes Hector) and relationships (spouses, lovers, parent/child, siblings) and the world shifts from “normal” to one that becomes increasingly grim and bleak as it becomes clear that aliens from elsewhere have attempted to exterminate humanity and claim Earth for themselves. Certain images and thematic elements keep reappearing in the book, as if to remind us that we are re-running the same story in a different iteration.

But this is not really a story about alien invasion and post-apocalyptic human adaptations. It is mostly a story about the possibilities and permutations of love and loss, on mostly the individual level but occasionally on the societal or all-of-humanity levels. We are left wondering what—and who—is “real” and whether or not there is ever really one version of anything, be it an event, a story or a person. Or reality.

For me this book was at its strongest and most memorable when it was exploring the feelings of love and loss between the characters, in whatever form they happened to be taking at the time. The moments of true, relate-able human feelings were what pulled me through each scene, even when I didn’t at first understand what was going on with the larger story. By the end of the book I really appreciated Brissett’s skill at non-linear storytelling, and found myself more satisfied with the ending than I had anticipated (I had feared that the whole thing would just sort of bleed away into chaos, but it wrapped up in a clever way.) My only criticism really of this book was that it was, if anything, too sketchy—though I understand and appreciate why it was so, I selfishly and greedily would have really liked the book to be longer and to have even yet more iterations, so that the setting(s) and the situation(s) could have been fleshed out even more. More kaleidoscope, please!

Considering that this is a first novel published by a small press, this book has already gotten a lot of kudos and attention (nominated for the Tiptree, special citation by the Philip K. Dick award, recommended by Locus, reviewed by the LA Times Book Review, and more). I hope it gets more. If you like your science fiction chewy and thought-provoking, you will like Elysium.
Posted by Heroines of Fantasy at 1:59 PM