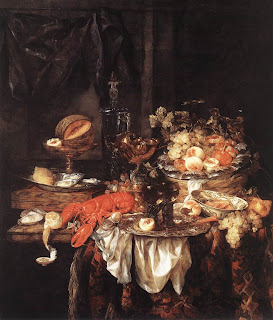 What is Thanksgiving without food?
I’ll admit it: I love to eat.  It’s probably no great secret that the rest of us do, too.  But food means more than just sustenance—what we put in our mouths is a central focus of our lives and defines who we are as individuals and as a culture.
So why is food largely absent from fantasy?  Authors provide occasional mentions of food: the giant roasted boar at the banquet, the dead rabbit shared around the fire.  But we fantasy authors, with all of our imagination and creativity, could do so much more.  Food can be used not as a throw-in detail (or as too much detail), but to actually define our characters and the world in which they live.
Use food to define personality.  One of the petty criticisms of Ken Scholes’ fantastic first novel, Lamentation, was that his main character’s preference for chilled fruity wines was unrealistic.  Where did his minions find the ice, after all?  While this detail can distract the reader, it also helps create this character.  Through the series, Rudolfo changes from a carefree lover of chilled wine and women to a strong leader.  In later books, when he starts hitting the chilled wine rather heavily, it says something altogether different about his character, and Scholes doesn’t have to use much space in the novel to do it.
As much as our likes define us, our dislikes define us more, and can say a great deal about our personalities in very few words.  A child who only eats pizza and chicken nuggets?  Picky.  A person who refuses to drink anything but red wine from a certain label?  Discerning.  What conclusions can you draw about someone who enjoys everything?  Who prefers lots of meat, no meat, or rich foods?  Who refuses to eat that dead rabbit, and instead fetches her own berries from the forest?  A simple mention of what a character chooses to eat (or not) can say so much about your character in only a few words.
Use food to define social class.  One of my favorite scenes to write in Song and the Sorceress was the one in which Ki’leah, a runaway princess, tries to figure out how to eat without silverware in a totally different environment.  The people around her dig in with pocket knives and fingers, a method completely foreign in her world of polished silver forks and knives.  It’s a huge culture shock, as it should be for any member of pampered royalty thrust into the wilderness, and says a great deal about social structure and manners in Ki’leah’s world.
Use food to define families and traditions.  It intrigues me that many modern fantasies don’t incorporate the same traditions that we hold dear.  There is no Thanksgiving, no Passover, no gathering of family in the kitchen to put together a meal.  Yet these are important elements of our cultural heritage.  For many of us, gathering to make the Thanksgiving meal as a family is almost more important than consuming the end result.  How can food help define your characters’ ideas about family and their relationships?  How can the simple preparation of a meal define their place in a greater tradition?
Food as cultural signature.  Most people know what it means when something is as “American as apple pie.”  Whether we like it or not, our culture is defined by our love for fried chicken and fast food.  A universally-recognized sign for all things American looks suspiciously like the golden arches.  We also define other cultures by what they eat, whether they enjoy rice, bangers and mash, or baked ziti.  And this is where fantasy runs into the most trouble: nothing says Euro-centered fantasy like that infamous roasted boar.  In fact, I would argue that the boar has become a more prevalent stereotype in fantasy than the sexy female love interest.  Got boar?  Check!  Consider instead finding some dish, even creating your own, that defines your culture in a stronger way.
Perhaps most importantly, let your characters eat!  They do need sustenance for that long journey, battle, or interrogation.  Let your executioner munch a turkey sandwich while he tortures your hero.  Have your heroine grab a bit of jerky on the road (or at least let her stomach growl).  Food is a part of your characters’ lives as much as it is a part of your own; and, with just a few small details, you can build a better world.
Posted by Heroines of Fantasy at 12:01 AM

Kim, you've made me hungry. You're right! Boar is the new stew. Everyone's eating boar. I suppose because they exist on just about every continent, in some form.

I try to incorporate food into my stories. Well, the whole spice thing in Finder made it kind of necessary! Ha! But I hadn't thought about ritualistic feasts like Thanksgiving and such. Such important aspects of culture, and we don't often see them incorporated.

I've noticed a peculiarly high amount of food in Hadley Rille novels. From Song to Finder to The Priestess and the Slave and Like Mayflies in a Stream to the spread Ghemena had on her table for Eolyn to Lawrence Schoen's Buffalito novels (and buffalitos can eat anything, concrete, lava, wood, potatoes, you name it). It's good use of the five senses to include the food of different cultures. And like Kim indicates, we like food.

I noticed that too!

George R.R. Martin used food extensively in his "Song of Ice and Fire" series. There's even a website giving recipes for their closest approximation of what was served at the banquets out there somewhere.

It's not fantasy, but there isn't a book in existence that uses food as mouth-wateringly as The Joy Luck Club. I'm drooling just thinking about it.

I have noticed GRRM's penchant for almost over describing the bounty his people get to scarf. Works, I guess. My buddies rib me about the prevalence of wine in Poets and the other drafts. When we hit the wineries on golf outings, they always ask me how many chapters a particular vintage was worth. What a riot.

It seems like fantasy as a genre must have a fixation on dairy products. Everyone has a rind of hard cheese in a bag, and bread to gnaw on. And yet I wonder at the reality of that situation. Both elements, especially in the pre-industrial worlds that characterize fantasy, are enormously labor intensive. Flour, leavening--even from the old time geosperms that folk used in antiquity--were challenging to produce and store. Cheese? It's not just about having a cow and a churn handy. There's a lot of gathering, sorting, mixing and storing that goes into producing those staples that our characters seem to access so easily. Bread stales FAST--and probably did so faster back in the days before Wonderbread's preservatives showed us how to keep mold at bay.

Frankly, I think this whole idea accentuates the notion that fantasy novels inherently cross-mix their idioms. We take our people on journies. The quest is such an elemental part of the genre, and yet most folk in the pre-industrial cultures did not travel much beyond their native areas--especially if they were tied to the bread and cheese culture, which is a marker for stable civilization. On the road? Fleeing the bad guys? A bag of raw carrots might serve you better. Dried meat would last longer and store better.

So, I love food in stories, but I sometimes wonder if we get it wrong. To me, Kim's question speaks to my intended topic when I get my chance to post on here (thank you for the future chance, btw. The quest: how and why we do it--and how do we deal with the variables that figure in to the equation--like food (and earlier, more scatalogical topics taken up previously)?

I'm off to pop in some modern geosperm, preservative riddled starchy stuff and make some toast to go with my cup of KLAH ( in honor of Anne McCaffery's passing--another great writer who knew the value of food in the cultures she created for her stories)!!!!

BTW, I love the verification scode irony for this post: the topic made me smile for the first time in weeks and the word set was 'scowled'. wow.

Once again I'll envoke Tolkien and say, he really got around a big problem with the ingenuity of elven bread/waybread. It not only stays "good" forever, but it fills even the likes of Gimli along the journey. Gotta love it.

Oh, I do like a book where the characters actually eat. And drink.

One thing that my critique group has commented on with me is that I create my own foods--whether it's as simple as a different type of spread for bread or as complicated as a type of multi-layered dessert--and how they like it, but would never be able to do it themselves. They also comment on how the differences in what the characters eat or don't eat make them stand out. My main girl in one series eats no meat because animals were her companions as a child. A guy in another series eats or drinks nothing with certain spices because it causes problems with his magic. There are all sorts of reasons to have characters eat or not eat certain things.

I never realized that it was so unusual until they commented on it and now you wrote a post on it, Kim. I think part of my love of including food and drink is that I love to cook and I especially love cooking for others. This means I put a lot of thought into food and how it makes people feel. When I think about that, I figure the reader will catch on to some of those feelings and it helps create the background of the world.

Christina--I always chalk it up to being Italian, and food being such a huge part of my culture, but I too end up putting a good amount of food details in my stories. Food IS culture, and spices, meats, fruits, whatever, both define and differentiate cultures.