It is our pleasure this week to welcome Dorothy Hearst, author of Promise of the Wolves and Secrets of the Wolves.

I met Dorothy for the first time last fall, at the World Fantasy Convention in San Diego, where I had the good fortune of receiving a copy of Secrets of the Wolves in my bag of free books.  This is a wonderful and engaging tale where the protagonist is not only a female, she is a wolf.  The story is set in the period of prehistory where the ancestors of present-day dogs began their journey toward domestication, and is told entirely from the wolf's point of view, with extraordinarily accurate attention given to wolf behavior and social structure.

Before the wolves barged in the door, demanding that their story be told, Dorothy was a senior editor at Jossey-Bass, where she published books for nonprofit, public and social change leaders.  The third book in her wolf trilogy is currently under construction.  (And I can't wait to read it!) 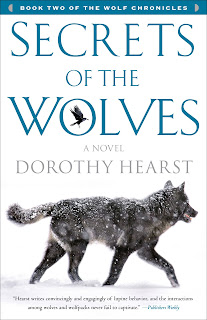 I always knew that when I started writing, I would write strong female protagonists.  Like many girls growing up in the seventies and early eighties, I hungered for female characters who were not sidekicks, damsels in distress or love interests, and I cherished the amazing female protagonists available to me. I swore that if I ever wrote novels, I would write wonderful women and girls.


When it turned out that my first novels insisted on being about wolves, that didn’t change. Promise of the Wolves and Secrets of the Wolves are about the domestication of the wolf from the wolf’s point of view.  Since so much of the repression of women and girls seems to me to be about the taming of that which is feared,  I was excited to explore the concept of taming from the perspective of a female wolf—a symbol of the wilderness we both hunger for and fear.


Kaala is a young shewolf living 14,000 years ago in the Wide Valley, where wolves are forbidden to have any contact with humans.  When she saves the life of a human child she becomes an inadvertent rebel and begins her journey to become a leader of wolfkind.  Kaala’s voice was sure and unapologetically strong right from the beginning.  She had no intention of being anyone’s sidekick, and so right from the start I had my strong female protagonist. Her male companions—one wolf and one raven—made her more powerful to me rather than less.


I did not, however, want a superhero, a character with unusual strength or special skills that would make her less vulnerable than others. I wanted a different kind female power, that of a leader in the making. Kaala is an ordinary wolf thrust into extraordinary situations.


I also wanted Kaala to have to work for her power not because she was female, but because earning power and influence is part of the leader’s journey. This is where writing form a wolf’s point of view was a huge advantage; I wasn’t limited by human assumptions of femaleness and power.


Kaala’s wolfliness allowed me to write a heroine who didn’t have to challenge feminine norms in her world because wolves do not have human ideas of male and female power.  I could write a heroine who didn’t have to overcome her femaleness in order to have authority, because she and those around her assumed that she has just as much right to power as any other wolf.  I didn’t realize this when I first started writing the trilogy because for years people thought that all wolf packs were led by alpha males. Now it’s known that this is not always true. There are female pack leaders and, in fact, pack leadership is fluid with different wolves taking leadership at different tasks. The single alpha male wolf is a human construct based on the assumption that leadership must look male. Kaala does not have to overcome being female.


Kaala’s human counterpart, TaLi, has no such advantage.  She’s the child Kaala rescues from a rushing river, and she is meant to be the next shaman of her village, which for years has accepted a balance between male and female power.  By the time Kaala meets TaLi, however, this is changing. Both female  power and the power of the natural world are being seen as threats.  As the humans try to tame the natural world—including wolves and the shamans who run with them—they also are trying to tame their females.  The contrast between the world of wolf power and the world of human power was one of the things that intrigued me. It’s a centerpiece of the third book of the trilogy, which I’m revising now.


Kaala is my first heroine. She won’t be my last and I’m looking forward to using what I’ve learned from her as I move forward in my writing and my life, and I hope that readers enjoy meeting her and sharing her journey to power and leadership.


Synopsis:  Secrets of the Wolves

The rules of the Wide Valley wolves were clear:  Never consort with humans; never kill a human unprovoked; never allow a mixed-blood wolf to live.

When she was little more than a pup, Kaala, born of mixed blood and allowed to live against the will of many in her pack, found herself irresistably drawn to the the forbidden humans.  She shattered the rules of the valley and exposed the lies hidden beneath.  Now the responsibility for the consqeuences rests with her. In the second installment of The Wolf Chronicles, Kaala -- with the help of her young packmates, the humans they have befriended, and an extremely opinionated raven -- must find a way for the wolves and humans of the Wide Valley to live in harmony.  If they succeed, Kaala will finally prove herself worthy of her pack.  If they fail, every wolf and human in the valley will die.

Then Kaala learns that the implications of her actions extend far beyond the Wide Valley.  Humans, and their relationship to the wildness of the world around them, are changing, and the choices Kaala makes may affect not only her pack, but the survival of all wolf-kind.

Posted by Heroines of Fantasy at 7:03 AM

I got all teary, reading this. Just imagine--a female who does not have to overcome her femaleness to gain power.

Beautiful post. Truly beautiful. I'm going to have to add these books to my TBR pile. I wish I'd gotten one in MY book back from World Fantasy.

Thank you, Dorothy! And thanks, Kim, for getting her here.

Just the fact that femaleness would be considered something to 'overcome' says it all.

Dorothy, thanks so much for joining us this week on HoF. I really enjoyed your post, especially after having read some of your work. It's great learning a little about where the inspiration for 'Secrets of the Wolves' came from.

Karin--D'oh! I did know that, but forgot. Sorry!

It was a pleasure to be a part of Heroines of Fantasy. Thanks so much for the opportunity to post!