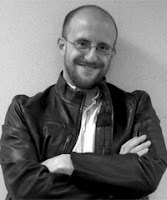 Please welcome our August guest, Jim C. Hines, author of the Goblin Quest books and the Princess series, "often described as a blend of Grimm's Fairy Tales with Charlie's Angels" (jimchines.com). He is an outspoken advocate of women's issues on his blog, where he addresses a variety of topics from rape awareness to depictions of women in cover art. His most recent novel, Libriomancer, debuted August 7th.

First of all, my thanks to Kim for the invitation to do a little guest babbling! Kim suggested I could talk about “the perspective of a man who writes women characters well.” (Thank you!) So I figured I’d share the secret.

Ultimately, I think this is the key to learning how to write female characters, and I’m going to share it with you all.

Here it is. The big important secret that, unfortunately, some of us still struggle with. Are you ready?

Shocking, right? But I think some writers tend to forget this point, or even worse, never learned it. Sometimes women are nothing but trophies to be won, the hero’s prize after a valiant quest. (This is one of several reasons I can’t stand most of the original Sleeping Beauty stories.) Alternately, women can be used to motivate the hero. “Women in Refrigerators” is a good example of this syndrome. (Google it if you’re not familiar with the phrase.)

I do think we’ve gotten better over the years. Heck, these days you can find all sorts of Strong Women Characters™ in urban fantasy and elsewhere. Yet, as I read these stories, I can’t help noticing how often the Strong Woman Character™ falls into a particular, somewhat narrow definition: tough, cynical, sexy, and physically kick-ass. And don’t get me started on the cover art and poses.

Now, I happen to like kick-ass heroines. I was a big fan of Buffy and Faith. I enjoy watching Black Widow hold her own against the bad guys, or reading about women taking on vampires, werewolves, demons, and whatever other monsters have come along to threaten them.

But that can’t be all there is. If the only significant female character is the Strong Woman Character™, then that’s a problem. If she’s the only character getting any time in the stories, then we’re not really reading about women. We’re reading about one particular subtype of woman, while erasing all the rest.

I remember the first time someone said they thought the strongest female character in my book Goblin Hero wasn’t the goblin wizard-in-training, nor was she the goblin chef with a spoon that could crack skulls; the strongest character was Grell, an elderly goblin who hobbled about on two wooden canes. In terms of combat, she was pretty much the least capable of defending herself (with the possible exception of Braf, who was just as likely to incapacitate himself in a nose-picking accident).

But she was smart, she was cranky, and she was perfectly capable of manipulating the other goblins into getting killed instead of her. She was a fun character to write, in part because I wasn’t trying to fit her into a narrowly-defined subcategory.

I’ve talked to a number of new writers who struggle with how to write female characters. Or non-white characters. Or LGBT characters. I struggled myself when I was starting out. The problem is when we try to define the characters by that one dimension. That approach, shocking as this may sound, leads to one-dimensional, stereotypical characters.
Women are people. You’d be amazed how much better a story gets when the author treats them that way.
Posted by Heroines of Fantasy at 12:00 AM

Jim, thanks so much for stopping in this week. I always enjoy the posts on your LJ blog; and it's great to have you share some of your insights here.

The trials and tribulations of being a woman in fiction. Seems no matter what role we choose to write for them, they end up some kind of trope. Is there any female character NOT written yet? We have kickass cooks and crafty crones and powerful mages. What we don't seem to have any more are damsels in distress. Not that this is a bad thing, but there ARE such things and sometimes I miss her.

To an extent. I suppose no one wants to be her or write her. I'm wondering if there can be a kickass DID. Can there be?

Terri, I think Fiona from Shrek is a fine example of this.

In some of my own stories, I have female characters that need rescuing from themselves or situations they don't yet realize they need rescuing from. I think the same could be said of all of us. Sometimes, try as people might to rescue us, we fight them tooth and nail. We don't want to be rescued, either because we don't see the danger or don't want rescuing. And not even because we can already rescue ourselves. I think it's folly to think that we are always capable of being our own hero/ine, but we each give it a shot when we have to.

Clint--Fiona is an EXCELLENT example. And you know, when Jim mentioned hating most Sleeping Beauty stories/heroines, I thought of your version of her immediately as one he might not.

Aw, shucks, thank you, Terri. Since I've put her into a novel, she's gotten even better. Definitely a reluctant damsel, who by the end of it, folks are gonna wish hadn't gotten rescued at all.

Thanks for your wonderful post, Jim! I enjoyed your perspective very much. Keep up the good writing! :)

Aaaayyy I have a female charater with DID yes she is kickass yaaaay!