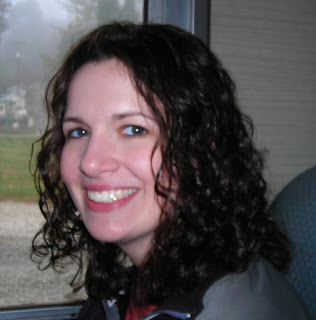 This week we welcome our sister at Hadley Rille Books, author Melissa Mickelsen.

She began writing in high school. After graduating from the University of Georgia in 2007 with a degree in Art History, Melissa worked in various jobs before pursuing a master’s degree in technical communication and information design from Southern Polytechnic State University.

Melissa's been kind enough to provide us with an excerpt from Nightingale, so after her interview, please keep reading!

Tell us a little about the novel Nightingale.

Nightingale is the story of a halfblood girl. Halfbloods are rare creatures, half-human and half-anthela, and ultimately regarded as demons by both races. They don’t fit in anywhere. When she is young, her home and everything she ever held dear is destroyed, and the man responsible forces her to become an assassin against her will. He uses her strangeness and the fear her kind inspires to terrorize a kingdom. She struggles for her freedom, pursued at every turn by the king’s General Talros who has vowed to capture her.

The book is about one girl’s fight to find herself, to live as she wants, but first she has to survive. 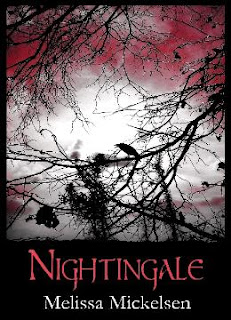 What was the inspiration for the character that goes by the name Nightingale?

Honestly, my teenage years. I went through some rough times growing up. At the core of it, we all want to be accepted as we are. We all struggle through tough situations in life, situations we think will break us, but there is always an ending. Things get better. Sometimes, though, we are the catalyst. Sometimes we have to force our circumstances to change.

The world of Nightingale is complex and very richly imagined.  How long did it take you to work out all the details?

Well, I first wrote Nightingale while I was in high school. The first draft, which was extremely rough, was written in about 4 months. I reworked it from the ground up a few years later and the whole process took about a year and a half to complete. I took many notes during that time, sketching out regions and races, and reading a lot of books about medieval living, weapons, herbs, terrain, etc.

What other projects are you working on right now?  Will there be a sequel to Nightingale?

I do have sequels planned for Nightingale. In fact, there are three other books planned in the series. I am currently working on writing and self-editing the third one.

What is your writing process like?  Any interesting rituals or techniques?

I write best in the early morning or late at night. I usually listen to music; the Lord of the Rings and Morrowind soundtracks are my favorite right now. I also don’t like having the overhead light on. A lamp in the corner is fine. A softer light makes it easier for me to concentrate.

What are you reading right now? Who is your favorite author?

I’m reading The Burning Land by Bernard Cornwell and Meat by Joseph D’Lacey. I have a lot of favorite authors: Jean M. Auel, Juliet Marillier, James Clavell, and Dan Simmons are a few. I mostly read fantasy and historical fiction, and sometimes dabble in science fiction.

What advice would you give to aspiring authors?

Read everything you can get your hands on. Even something that might not sound interesting can contain a scene or sentence or thought that can spark an idea. The next piece of advice would be to develop your own style. Don’t try and copy anyone else; just be yourself. Work on developing your own voice. Just write naturally and don’t try to force it.

I sprinted through the lanes made into labyrinths by the ramshackle houses, searching for refuge. This was Astin Talros after me, the revered General of the vaunted Weapons. I had to find a place to hide, and fast. I could no longer hear him behind me, but did not spare a glance to make certain. It would slow me down.
I chose a ledge and jumped, scrambled upwards onto a roof and raced down the length of the lane until a missing roof halted my progress. I spun, looked swiftly, and leapt to the nearest structure on the opposite side of the street, thanking the gods for narrow passages.
I dashed over rafters and loose roofs with heaving lungs and galloping heart until a section of rotted shingles cracked under me. I was thrown off-balance, skidded to my knees and slipped close to the edge of the pitched covering. In an instant I was up and off again, but the slip had slowed me considerably. Exposed beams like skeletal fingers stretched before me and I ran toward them.
The pain was immediate and incredible. I gasped as my shoulder erupted in agony, as I was lifted off my feet and sent spinning through the open air to land in a stunned tangle on the refuse-littered ground. I fought for breath, for sense, and came to myself just enough to notice the pale-fletched arrow protruding from the front of my right shoulder, just under the collarbone.
My trembling fingers touched it and the pain blossomed in my skull. I cried out as the redness washed over me, trying to drag me into the depths of unconsciousness.
His horrid face loomed over me, wavering in my pain-watered gaze. “Where is Guildmaster Caspon?” he rasped, grabbing me by the front of my tunic and lifting my torso off the ground. “I know he’s your master, so tell me where he’s hiding!”
I struggled to draw breath, to see straight. I could feel the wooden shaft against my bones, scraping against the muscles I worked to keep still. Each pulse of my heart was fire and ice, like sharp gravel in my veins. “I am…” I said as strongly as I could. The front of my tunic was wet with blood, sticky on my skin. “I am no one’s slave.” The words were more powerful than I thought they would be. I met Talros’ eyes with as much dignity as I could muster.
And then I could not focus on words for my world was spinning. I screamed as the arrow shaft was snapped and my hands rebound. “You are a coward and a fool,” Talros said in a flat tone, shoving my headband into my mouth to stifle the noises I must be making, and heaved me over a shoulder so that my hair hung loose around my face. I could feel trickles of my own blood creep down my neck toward my face, leaving hot trails of wet in their wake.
His arm went around my waist, holding me like a porter does a sack of flour. Each step was torture, each breath torment. Of all the arrows I had loosed, of all those aimed in my direction, not one had ever struck me. Was this what my victims had felt, this searing pain? My self-loathing redoubled. I had caused this suffering to others; it was only fair that my turn had come.
I thought suddenly of my companion. Had he made it to the manor? Get away, I thought. Run from here and forget the maps. Talros was more cunning that I had thought, to my detriment, but if I could keep him from Nyx then I would try my hardest, wounded or not. I exhaled and let my body go limp in the hopes that Talros would put me down, thinking I was unconscious or perhaps dead.
He did not fall for my ruse, and I made myself turn my head, heavy though it seemed, to gain my bearings now that we were gone from the mummers’ area. The rotting shacks had vanished and the lanes were stone and soil both, giving way to cobblestone as we went onward. An upward-sloping area came up beside the lane, and I recognized it as my practice field.
The manor! Oh gods, oh gods! I thought wildly. He is going to the manor. Why? Nyx might still be in there, fool boy who had insisted on the job, and we two could not be remotely safe in the same place. I had to delay if I could to give Nyx a greater chance at escape. I was not certain how much time had passed, but it could not have been enough. Daylight could come and I would still think it had not been enough.
I twisted my body, fighting the flaring pain, and kicked outward, struggling to slip from his grasp. He grunted in surprise and hurt as the toe of my hard boot punched him in the ribs, and his arm tightened on my waist. The other wrapped around my knees in an iron grip, stopping my flailing feet almost as soon as they had started.
“Stop!” he snarled, pulling his arms tight, but I writhed like a snake and managed to contort enough to snap my teeth on the flesh right below his ear. He bellowed and heaved me from his shoulder. I landed on my side on the stone street, the wind knocked from my lungs. The hurt was incredible but I had no air to cry out. I could see my blood in the starlight, dark and gleaming like water under a full moon. I rolled my eyes to the man, seeing a black slick on the side of his neck, and bared my teeth at him.

I had no idea Nightingale was first written when you were a kid. Wow, Melissa! Go you.

Melissa, I really enjoyed your novel & am so happy to have you here on HoF. Thanks for a great interview!

Yay Melissa! Yours is the first book I ever edited, and I am so proud of how it turned out! The story hooked me from the first page and I read the initial draft in one day. I hope more readers discover the awesomeness of Nightingale!