Eric here. Regular readers of Heroines of Fantasy have probably been wondering just where the hell I've been, since my "regular contributor" status was revealed on the HoF About page long ago. Right?

Well, here I am, and I'm about to get all meta on your collective behinds. Because I'm a writer...with nothing to write about.

No, not fiction. That I've got plenty of, and I'm way behind.

But blogging and writing about...writing? Much harder.

I used to be addicted, utterly and completely, to reading about writing. I remember in college, when I had a free hour or so, heading into the school library, up in to the stacks on the top floor and finding bound copies of years old issues of Writers' Digest magazine. I'd sit at a privacy carrel with them until I was out of time, soaking in advice and tips I don't follow because I can't remember any of it. 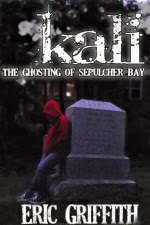 (I did get my book KALI: THE GHOSTING OF SEPULCHER BAY personally critiqued at a WorldCon years later by WD fiction columnist Nancy Kress though. That was cool. But I digress. Probably not for the last time.)

The problem was, I was looking for a magic bullet. I was lazy. I wanted a way to find a way to make writing not only less work, but instantly successful. I'm not saying I wanted that over-night fame and fortune of authorship because I spent my collegiate years toiling in food service...but I'm also saying I ruined a lot of neckties as a dining hall supervisor by carrying giant pots of soup out to ungrateful undergrads. So you do the math.

The problem with the magic bullet is, it's not there. It took me a long time to really and truly believe that. The world loves an overnight success story and I thought I'd be one—if I could just find the secret before I put in the work.

Guess how much writing I got done?

It wasn't even so much that I didn't get much done—I was too lazy to work at it at all until, finally, in my mid-30s, the incessant nattering voices in the back of my head became too much. I had to get all the thinks out of my think-meat and converted into readable pixels worthy (perhaps) of being ink on paper.

What I'm trying to say is: if you've got voices telling you to write, do it. Now. Don't wait. It doesn't matter what age you're at, from 15 to 95, start getting it down. (I'll excuse the 1- to 14-year-olds that lack for skills and training; anyone greater than 95, you've earned your time in the La-Z-Boy gumming prunes to your heart's content. Seriously. I already envy you.) The skills to tell a story only come with practice. Writing was something I almost gave up on without really trying. Coming back to it when I did meant I was better than I probably would have been had I started younger... but I was nowhere near close to as good as I could have been, had I been writing when I was ingesting dusty, musty WD issues. Not to mention all the dust and must I ingested.

What does that have to do with me writing about writing and being a writer? I just feel like...it's all been done! What's there to say that isn't already covered in WD or a thousand other places? All I can do is point you toward your own keyboard and hope you'll join those of us on this silly enterprise we call "being writerly" [NOTE: No one calls it that.]

Because there is no magic bullet, no spell for success, no way to instantly achieve what you want.

But if you try sometimes, you just might find... you get to succeed.

My apologies to the Rolling Stones.


ERIC GRIFFITH is the author of BETA TEST from Hadley Rille Books and KALI:THE GHOSTING OF SEPULCHER BAY. He's currently writing about homeless people with super powers. Visit Eric at http://egriffith.info.
Posted by Heroines of Fantasy at 3:00 AM

I love this post, Eric! For someone who was stumped on writing about writing, you did a great job. :)

That was as great a pep-talk as I ever read. I'm posting this in my writing-group page. Great job, Eric!

A "95-year-old gumming prunes"? I know a lot of seniors who would hoist you up by your bow tie for that comment. If you have the energy and desire, you can always find the time to write--if you really want to.

Glad to see you back up on your horse.