Summer is officially over. Autumn is here and the holidays (which begin with Halloween, for me) approach. It's always sad to see summer go; despite the fact that the "lazy days of summer" don't actually exist in this world of cramming in as much as possible before September drops us off in autumn, it still seems more languid. Maybe it's the heat and sunshine. It makes memory lazy.

Summers past have been rolling through my head the last couple of weeks. Just today I remembered a family vacation down on the Delaware coast, where the family and I have vacationed for twenty or more years. After a week of sun and sand and dinners out and lots of family time, we were heading home on the Cape May/Lewes ferry. See all that about sun and sand and family fun? I love my husband and kids, but a week in close company with the lot of them is draining. I admit, I was hiding from them. I needed those last lungfuls of sea air. I needed some quiet to absorb all I could of that vast  and briny love of mine before heading home to the mountains. I stood at the railing, face to the sun and the wind blowing back my hair. Dolphins leapt and seagulls shrieked. Sounds like a scene out of a cheesy movie, but I swear, it was really that perfect. As it happens when I'm alone and my brain is completely free, it bubbled. 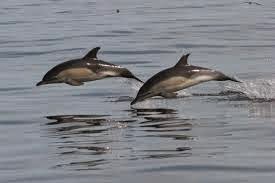 I don't write on vacation, but I never stop thinking. I'd been thinking of, dreaming of, pondering over revisions I was working on, getting things settled into place. One point still niggled at me, but I was confident I'd be able to smooth it over once I got home. The sea + peace + dolphins = inspiration. All of a sudden, I had it! In a five line snippet of dialog between two characters, that niggling detail fell into place. I had left my bag in the car, and had only the book I was reading in my hand. I didn't trust my memory, so I went into the bar and asked the elderly barman if I could borrow his pen. He looked at me as if I were a mean-spirited dwarf asking for his firstborn in exchange for gold spun into straw.

He handed it over. I scribbled my lines of dialog on a cocktail napkin, chills skittering all over my skin, and handed the pen back to him with a breathless, "Thank you!" He looked at me again as if I were that dwarf, only this time I'd danced a jig, too...naked. I went back out to the railing, happy as could be...


...and another bit of dialog hit me. A perfect bit that went with the last. CURSES!!! I couldn't ask the dwarf-hater for his pen again. I went into the snack bar instead. An elderly gentleman, could have been his twin, was happy to hand his pen over. I scribbled away. He watched me with a little boy's wonder. When I was done, I handed his pen back.

"You had all that in your head?" asked he.

I told him I'm a writer, and that I just got hit with a bit of story that had been giving me trouble.

Again, that look of wonder. I was no longer the mean-spirited dwarf stealing firstborns and dancing naked jigs. I was something like Santa, or a unicorn; a being people heard about but never really saw in the flesh. The woman at the next register said, "Yeah? Cool. That's cool."

Being among writers most of my day, I forget that there are people who don't write, who don't have other people living inside their heads, under their skin; people who don't live in several different worlds at once, whether that world is a fantastical one, or Chicago. We writers can become jaded by book sales and promotion and the gazillion and one things we have to do just to stay visible, that we forget there are those who get lost in our worlds, in our characters, even in us as writers.

We mustn't forget--something I needed reminding of just this morning, in fact. Selling lots of books makes us successful, of course, but so do little-old-men who look at you like your a unicorn.

Well said, especially coming from a dancing dwarf with a silvery mane!
I am having a zen moment after reading this post, and will more happily work on my edits and think less about why the current book isn't selling faster.
I thank you, my friend.

There's a quote from some one who says "If you're doing something you love, then you're successful." I love that quote and I think it pertains to many of us who write.

I used to try and keep a pen and paper in my purse with me, but now I just write the things the voices in my head tell me on my iPhone, LOL - technology.

If I could only teach the voices to use my iPhone :)

I'm always getting ideas in the car on the drive home. Sometimes I'm trying to drive and scribble down ideas. Snippets of dialog. Revised plot points as I try to drive. For whatever reason, when I get an idea, there never seems to be enough red lights.

Sharon, it's so easy to forget the joy when we're worrying about sales and promotion. I have to pull myself back from the edge all the time. Thankfully, I have you to bitch with!

I always have pen and paper on me--except that time! Actually, I did, but it was in the car, which required several navigated sets of stairs on slightly choppy water. I opted for the grump. :)

If the voice start using the iPhone for you, I'll call the sweet little men in the clean white suits to come take you away.

Clint--YES! I was hoping for red lights all the way down to Danbury a few days ago, and of course, got not-a-one. You know what I ended up doing? I write on my thigh. I can do that without looking! And I won't lose it. If my clothes don't cover it, the tattoos kind of make it blend in. Hehee!

Great piece, Terri. My ideas always hit me in the middle of the night or in the shower or after a drink before dinner, when no pen is handy. Too many times, I lose it all.

I always have pen and notebook on me--almost always. I did that day, too, but it was in the car, several shaky staircases below. I braved the crank.

Wow~
Terri that blog is so insightful. I must admit to always having a pen and paper as my purse is never far from my reach and from paper it goes to my white idea board. By the way, I think you would make a very enchanting unicorn.

Lise, thank you, darling! And, of course, you know my unicorn horn would absolutely had rhinestones in it. ;)

Awesome post, Terri! Thanks once again for putting it all in perspective.

Glad you liked it, Karin!

I have stuff bouncing around constantly whether I'm awake or asleep. I used to try and keep a notepad next to the bed, but clarity rarely survived turning on the light. I've learned to let the stuff swim along like cool fish in my mental aquarium, knowing that the final form will likely be a bit different from the initial images anyway, so why sweat it...

Mark--remember the episode of Seinfeld wherein Jerry wakes up in the middle of the night and writes down a hilarious joke, then can't read it in the morning? He spends the whole episode asking people if they can figure out what it says. In the end, he sees the movie on TV that he'd been watching and it all comes back to him--only it's not funny at all.
I've had that happen. I wake up, jot something down, and come morning can't remember why I'd written it down. Sometimes, I look at it and say, "Why'd I think this was worth writing down?"
I like your method better.