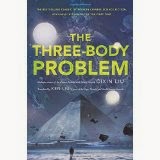 The Three Body Problem is a best-selling novel in China, and now that Ken Liu has translated it into English, I fully expect it to hit the best-seller lists here.  It’s really good.

Three Body opens during “the madness years” of the Chinese Cultural Revolution.  Ye Wenjie’s father is being beaten by his former students, now Red Guard members, because he won’t renounce Einstein.  Things go from bad to worse, and Wenjie (Chinese names are written family name first) ends up in a logging camp.  Then she gets commandeered as a low-level worker in a Chinese SETI program (Search for Extra-Terrestrial Intelligence).  Alas for humanity, the search succeeds, but the information never gets up the political chain and is lost when the radio station is shut down.

Part Two of the book opens up in the present, a few years from today.  Wang Miao is visited by the police.  He is taken to a “War Command Center” where they appear to be investigating the suicides of several notable physicists.  Over the weekend, Miao indulges his hobby of photography, using an old and completely mechanical camera, yet every picture he takes has a weird, and impossible, countdown on it.  This leads him to a computer game, Three Body, which was being played by some of the suicides.  Then the universe “blinks” at Wang and things get really interesting.

There’s a lot of crossover between readers of mystery and science fiction, largely because both types of fiction are puzzles.  Three Body is unique in that it is a science fiction mystery, with possibly the survival of the human race at stake.  Ken Liu, a great writer in English, does a wonderful job translating the book.

The world of Three Body is fascinating.  It’s our world, except as seen through Chinese eyes, and an alien world presented for us in allegory to allow us to understand their reality.  Cixin Liu has thought long and deeply about aliens and technology, as well as taken a harsh look at his own country’s recent history.  The book appears to end on a down note, but thanks to a secondary character we get hope for the future.

I for one also hope to see the sequels!
Posted by Heroines of Fantasy at 2:00 AM

I am looking forward to reading this. I've lived in many countries, but China was the most alien of them for me.