Wednesday Review: The Golem and the Jinni by Helene Wecker 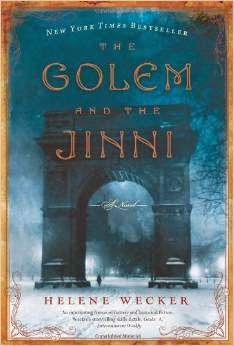 Hello fellow HoF readers! Julia here again, this time with a review of The Golem and the Jinni by Helene Wecker. Yes, I know, it’s a traditionally published book, but it is also one of the best books I’ve read recently and is both written by a woman and features a terrifically compelling female protagonist, so I still think it belongs here. Plus it’s such a great book, I really want you all to read it!

The Golem and the Jinni is one of those meticulously researched period pieces that makes you feel like you are truly in another place and time, in this case the lively, diverse metropolis of New York City right around the beginning of the 20th century (with the occasional foray into Eastern Europe and Syria). Set against the backdrop of the immigrant experience, we follow the two main titular characters (Chava, the curious, intelligent and practical Golem and Ahmad, the impulsive, creative and sensuous Jinni) as they enter New York and learn to live a new way in a new land. Chava is adopted by an elderly rabbi from the Lower East Side, and Ahmad is befriended by a kind tinsmith from Little Syria, and we get a fascinating look into the specific sub-cultures of both the Jewish and the Arabic immigrant communities, in many ways so different but in some ways so similar. Just like every other immigrant, both Chava and Ahmad must learn to cope with a variety of confusing and unfamiliar new circumstances and people, while simultaneously trying to both understand and hide their unique natures as magical beings. And of course...they find each other, connect and disconnect and connect again, and their relationship is as fresh and interestingly complicated as the teeming streets of New York.

In addition to the beautifully drawn setting, it is the characters that make this book really shine. Though Wecker has clearly done her homework on the myths and legends of both golems and genies, and creates her representative characters in respectful and culturally appropriate ways, she also manages to take those mythical characteristics and embody them in people who feel real and true and unique as individuals. Earthy Chava and fiery Ahmad are each totally convincing as both representatives of their magical types and as individuals, and the way they relate to each other and to their human communities makes for endlessly fascinating reading. There are a supporting cast of vivid and sympathetic secondary characters as well, who are each also excellently rooted in their respective cultures both old and new. Even her villain is believable and actually somewhat sympathetic.

Speaking of villain, Wecker also layers a really solid and interesting plot (and quite a few subplots) in here, with plenty of action, drama and setbacks that keep the book a page-turner right up to the last page. The whole story resolves in a very satisfactory way, although selfishly I am hoping maybe there might be a sequel someday.

I truly adored this book and have been recommending it to everyone I know. It seems to be a great “crossover” book—people who don’t normally read fantasy like it, and people who read only fantasy like it. I even made my book group read it, and most of them would prefer not to touch fantasy with a ten-foot pole. If you like great worldbuilding, vivid characters, beautiful writing and wise insights into identity, community and what it means to be a stranger in a strange land, you will love The Golem and the Jinni.
Posted by Heroines of Fantasy at 8:00 AM

My wife has been raving about this novel ever since she read it. I'm really considering giving it a go.

Thanks for the thorough review, J!