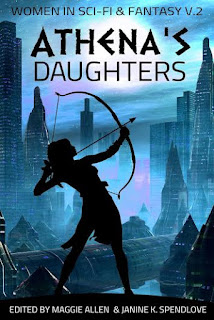 As part of my summer reading last August I read Vol. I of Athena’s Daughters: Women in Sci-Fi & Fantasy, later reviewed by Julia in more detail. Now Vol. II, edited by Maggie Allen and Janine K. Spendlove, has been released by Silence in the Library Publishing. Like its predecessor it does what it says on the tin, presenting an anthology of stories by women with female protagonists (well, twenty do; more of the twenty-first later). Each story is illustrated by Ginger Breo, who has matched image to story in a most satisfying manner.

So, to the stories. I shared Julia’s reservations about Vol. I being a bit over-reliant on add-ons to previously created worlds. It’s not an observation that can be made about this collection, in which only two stories (The Pendant and At the Corner of the Garden Wall) are companion pieces to full length novels. As with the previous anthology there’s a wide spread of protagonists from a multiplicity of backgrounds and ages. Most are human, or mostly human. One exception is Morgana, surely the true protagonist of Trish E. Pahl’s Crow Bait and Switch, a highly articulate, rather sardonic crow with a taste for Jurassic Park. Various strange and wonderful worlds are visited, from far-future space opera to fairies at the bottom of the garden, taking in virtual reality, time travel, angels and demons, African folklore, and sword and sorcery along the way. There’s a reasonable balance of emotion too: some stories are bittersweet, others feel-good escapism and some offer a mirror to reality. There’s no true despair: even the darkest tale – The Final Voyage of the World’s Oldest Time Traveler (Tiffani Angus) – is leavened by a touch of hope.

My personal favourite was The Miraculous by Tess Tabak. It’s a zombie story that isn’t really about the zombies (I’d posit that this is true of all the best zombie stories!). It’s the ‘twenty-first’ story, the one written in the second person (a point of view hard to pull off, but marvellous to read when it is) so that, in an anthology rich in heroines, one can project either or neither gender onto its protagonist. They are spooling down to the end of the world in their grandparents’ house, reminiscing, reading, thinking, eating. The most interesting short stories approach their real subject elliptically and this one does so quite beautifully. It's melancholy and full of precisely observed detail. It’s also funny. Mostly wryly so, as the protagonist reflects on their grandfather’s philosophies and their grandmother’s quiet subversions, but one laugh aloud paragraph bears quoting in full:


Now that you are forced to eat vegan, limited to the food he kept in the house, you can safely rule out the idea that abstention from dairy reduces aggression. You would happily gouge someone’s eye out for a slice of cheesecake.


Another story I found structurally interesting was Ariadne (Megan Chee), the text of which is the fragment of the iceberg visible above the water line. Ariadne is conscripted into a war whose cause she does not know; even her own part and purpose in it is left blank. It has the confidence to give away its ending right at the beginning and has, in fact, very little in the way of a plot. In careless hands such devices remove tension and momentum but here one savours the vignettes. On first reading I wondered if it were a stand-alone offshoot from a larger work but I gather it isn’t, and knowing that as I reread left me all the more impressed. So much is implied… In such a piece what is there is made meaningful by what is left out: filling in the background to shape the story into a ‘proper’ form would have rendered it insipid. It’s also interesting in its approach to the trope of the active heroine, presenting all the trappings but neatly undercutting them by the absence of autonomy. One to ponder.

The Killing Garden (Carrie Ryan) also stood out. It too treats its real subject sidelong beneath the iridescent gloss of fantasy. In a stylised, highly patterned court, condemned prisoners must race the emperor’s gardener through the thorny mazes of the palace gardens. Those who win are merely banished; those who lose are strangled by the gardener. Tanci, feeling the weight of her father’s disappointment that she was born a girl, challenges him for the post of gardener but eventually realises neither her purpose nor her father’s disappointment are as simple as she had thought in girlhood. Understanding brings acceptance and release. The prose is lyrical but well pruned and ordered, like the emperor’s gardens through which Tanci runs.

The beauty of a widely ranging anthology is there’s something to suit all tastes and moods. Fans of paranormal and dystopian fiction are as well served by this collection as those who prefer sci-fi and secondary world fantasy. Only those who wish for steampunk will wish in vain (I refer you to Vol. I!). It serves as a taster for a slew of different authors whose backgrounds are as diverse as the characters they have created. I’m certainly going to look up other work by some of these authors and shall look forward to seeing where the publisher takes their crowdsourcing project next.

I received a copy of the e-book from the publisher for review purposes. 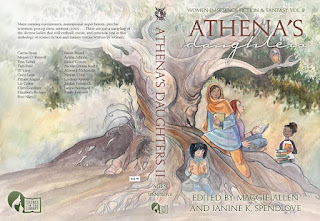