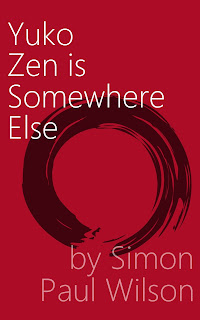 My name is Yuko Zen and I am somewhere else...

After a strange encounter with a beautiful girl in a Chinese take-away, Chris Winter discovers she's left her journal behind. He only opens it to search for her contact details, but he's quickly pulled into her mysterious world – a nameless Asian city filled with tales of Buddhist dogs, hedgehogs and yogurt pots, and a magical girl named Pixie.

When Chris is totally hooked, Yuko's journal takes an unexpected turn. It starts to talk to him...

I read Yuko Zen when I was somewhere else (somewhere hot, beneath the shade of olive trees and half-deafened by the cicadas). It’s short, light and breezy in tone, and broken up into nicely bite-sized chapters. I found it beautifully paced and delightfully self-conscious. Very playful in fact. The cover design is simple but, like all good covers, sums up the essence of the story in a single image. The blurb above describes its conceit: the framing device is Chris's reading of Yuko’s diary but most of the book is made up of that diary. Your opinion of it will therefore depend largely on your response to Yuko’s voice. She comes across initially as friendly, engaged, somewhat shallow. Her early diary entries are upbeat and chatty, describing her perfect life, with her perfect mother and her perfect best friend, Pixie, in an unnamed Asian city. Everything, from her music to cauliflower curry, is awesome and super-cool. Just at the point when (for me) this ideal was beginning to seem a touch wearisome, Pixie and Yuko quarrelled and things were suddenly less perfect, and more interesting. When she goes over to Pixie's flat to try to make up, Yuko meets a strange girl, Xue. After that, fate, or chance, intervene and Yuko's life takes several, very strange, turns.

What was noticeable was how pleasant and positive it was, even though it borrowed several tropes directly from horror stories. Sex, sexual identity, family relationships, all the things that in so much fiction are fraught and angst-ridden, were made warm and understanding here. It’s not that Yuko Zen is unalloyed sweetness and light – it isn’t, though saying how and why would give too much away – but it does manage to depict kind, good people behaving well without making them boring. That, I appreciated. It's a harder trick to pull off than it might seem. There’s a sense too of ideas bubbling beneath the surface. You can read a great deal into Yuko Zen, and for this reason it's a book that bears rereading. Its simplicity is deceptive, its still surfaces reflect. Wilson is making no attempt to be realistic, and the dreamy, somewhat unfocused feel of his book is, I think, deliberate. Nor is the paradox at the centre of the story explained: this isn't science fiction, more something between magic realism and a ghost story. One thing that did distract me a little was variability in spellings. I wondered for a while if Chris was using one flavo(u)r of English and Yuko another but concluded it was merely inconsistent line editing. But that's a minor thing. All in all, there's some very clever writing here, perfect for holiday reading.

I 'won' a copy of the e-book in a recent Facebook giveaway.

Yuko Zen is Somewhere Else
Amazon UK
Amazon US
Posted by Heroines of Fantasy at 4:00 AM