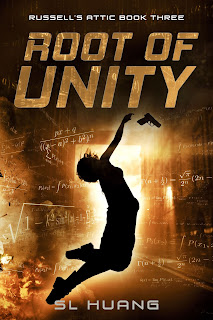 Cas Russell has always used her superpowered mathematical skills to dodge snipers or take down enemies. Oh, yeah, and make as much money as possible on whatever unsavory gigs people will hire her for. But then one of her few friends asks a favor: help him track down a stolen math proof. One that, in the wrong hands, could crumble encryption protocols worldwide and utterly collapse global commerce.

Cas is immediately ducking car bombs and men with AKs -- this is the type of math people are willing to kill for, and the U.S. government wants it as much as the bad guys do. But all that pales compared to what Cas learns from delving into the proof. Because the more she works on the case, the more she realizes something is very, very wrong . . . with her.

For the first time, Cas questions her own bizarre mathematical abilities. How far they reach. How they tie into the pieces of herself that are broken -- or missing.

How the new proof might knit her brain back together . . . while making her more powerful than she's ever imagined.

Desperate to fix her fractured self, Cas dives into the tangled layers of higher mathematics, frantic for numerical power that might not even be possible -- and willing to do anything, betray anyone, to get it.


Root of Unity is the third volume in SL Huang’s Russell’s Attic series (here are my reviews of Zero Sum Game and Half Life). By book three in any series you know more or less what to expect. In this series that’s relentless high octane action, fights, car chases, explosions, pressure mines, escapes from locked rooms… Oh, and Whovian references; there’s likely other nods too, but one recognises what one knows. These books are indeed very much the written version of a blockbuster movie: the ante is constantly upped as crisis mounts on crisis. The violence is extreme and Cas’s lack of remorse at the carnage she inflicts is consistent: such acts and such a protagonist may not be to all palates, but Do it well! is all I ask of an author, and Huang does this very well indeed; if, however, you prefer to read in a different register, I suggest you seek out her fairy tales published by the Book Smugglers. They are another thing entirely.

Half Life showed Cas Russell trying to live up to her friends’ high standards by not resorting to lethal violence as a first resort. At the opening of this book she’s past that, killing again without a qualm. She’s also falling apart in the intervals between her retrieval cases: something is bubbling at the outer edges of her memory and night terrors stalk her dreams. But Arthur, still the moral centre of these stories, refuses to give up on her and enlists her help in recovering a stolen maths proof. And then, as before, the plot snakes and twists into a web of intrigue and deception. Soon there’s another mathematician in the mix, and another vanished proof, and various governmental agencies, and a maths-mad bad guy, a would-be Salieri* to the missing professor's Mozart.

And Cas herself, playing both ends against the middle, at points the antagonist in her own story. Cas uses maths as a superpower: her almost instantaneous calculations and integrations enable her to use the laws of physics to her advantage. In the first two books, the mathematics has very much been a maguffin. It is here too, of course; you don’t – fortunately for me – need to understand efficient integer factorisation algorithms or the P vs NP problem** (or even Russell's Attic) to follow the plot of Root of Unity. But, rather more than its predecessors, this book uses mathematics, specifically mathematical genius, as the motivating energy driving the characters: Cas realises she too is a Salieri, able to understand but not create, and this drives her almost to madness.

And this is I think both this book’s strength and its weakness. The strength is that it addresses Cas’s abilities and character directly. Reviewing Half Life I’d wanted more of Cas’s past. I know she is not possible, what with her preternatural awareness of her own body, her lightning reflexes, her computational world view, her occasional slips into British vernacular when she is, to all appearances, American through and through, and, knowing all this, I want to know why. The hints are stronger here, drawing on threads that stretch all the way back to Zero Sum Game, and enough to begin to frame (tentative) answers to these questions. One of the things that keeps me hooked on these books, beyond the adrenaline rush, is their interest in the existential. They keep circling around the questions of what makes us more than a machine, what gives us free will, what, in short, makes us human. Nevertheless, I felt, reading and rereading, a discontinuity of tone, if not of fact, in this strand’s handling. Cas’s perception of her limitation is sudden (in fact, given the previous chapter, I tracked back in surprise, thinking I must have missed something) and a later scene where she is prompted to search out her past jarred, from the physical trigger to the discovery that told little I’d not guessed. This search felt, in short, a segment which had been made to sit rather awkwardly within this book because it was required for a long term plot arc. It’s a shame, because otherwise I welcomed the change of pace from relentless action to something more reflective, and appreciated too the delicacy with which Huang showed a shocked and frightened Cas reaching out for human contact. It’s a sign of how far both character and author have come since Zero Sum Game: impossible to imagine such a thing happening in that book.

Elsewise, the writing and plotting were as smooth and entertaining as I’d expected; so too the characterisation. That is a definite strength of this series, the interplay between Arthur, Checker and Cas develops and deepens book by book. The importance of friendship is a running theme, a counterpoint to the violence. Cas is currently a guilt-ridden (even if she doesn’t understand why) anti-heroine with a fractured and divided self but there’s the possibility that friendship will save her. No matter what, Arthur and Checker will be there to catch her when she falls, and Cas is slowly coming to understand this, reaching out first instinctively and then – more importantly, given who she is – deliberately and consciously.

Huang’s prose is assured and confident, more so I think with each new instalment. I think too her ambition is growing through the series. If you’re new to Russell’s Attic I’d not start with this book: much better to begin at the beginning with Zero Sum Game and work your way through. But do give this series a go; if you can finish one book without immediately reaching for the next, you’re made of sterner stuff than I.

* As depicted in Peter Schaffer’s play and film Amadeus. Not the actual Salieri.

** Since I read Root of Unity I keep coming up against references to P vs NP. Clearly I’ve been primed…

Root of Unity buy links
Amazon UK
Amazon US
Apple
Kobo
Barnes & Noble
Posted by Heroines of Fantasy at 2:30 AM