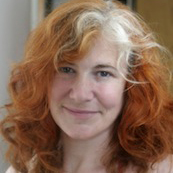 Hadley Rille Books has some great titles coming out this month, and today we'd like to feature one of HRB's new novelists, Heather McDougal, author of Songs for a Machine Age.

Heather was born in Northern California and grew up in a rural summer crafts school, where people from all over the world came to make things. As a result she received in-depth training in pottery, weaving, cooking, construction, and how to grow things. She has a degree in fashion design and eventually achieved an MFA in sculpture, where she learned to blow glass and weld. She has a long-standing fascination with automata and clockwork, particularly those of the 18th century.

After many international travels, she now lives in the same countryside where she was raised, along with her two daughters and her husband, and works as an educator and a writer. She won a Writers of the Future award in 2009 and has had work published in anthologies and magazines since then. Songs for a Machine Age is her first published novel.

Heather has provided an excerpt from the novel, so please keep reading after her guest post.


~*~
The idea for Songs for a Machine Age evolved from a robotics course I took for teachers. They were running the robotics course in the traditional way, meaning a problem-solving situation: you create the parts of the robot based on an assigned task, and then tried to do the task. So, if the task was to move an object from one side of a maze to another, people came up with, for example, an arm that picked the object up, or a flat blade that pushed the object ahead of it like a bulldozer.

I went along for awhile, but in the end the thing that struck me was how prosaic, how mundane the challenges had been. And, when it came to building our own robots, everyone came up with machines that spoke of industry, of tasks. They all did something useful.

I, on the other hand, wanted to experiment. I built a little 4-wheeled vehicle that had large and small tires kitty-corner to each other, so that when it changed direction it would also shift its center of gravity, making it waggle from side to side. It was a silly, floppy, dancing machine.

The others were interested in this machine of mine, its patently un-useful being. "What does it do?" they asked me, and I said, "It dances." And they all commented on how unusual it was. They scratched their heads and smiled.

I couldn't get this experience out of my head. I went home and kept thinking about it. I began to think about how much the Industrial Revolution has shaped the way our society approaches machinery -- how, in fact, it was the needs of industry that created machines, and we don't -- we often can't -- think of machines except as framed in terms of their usefulness.

This view is actually changing these days. Burning Man, the Maker movement, indie music and even playlist technology have had a huge effect on why and how machines are created and used -- the making of fun machines has increasingly gone from industry to the home, to the individual. And more and more, they are being made for art, for fun, and for creativity. But what would have happened if, somewhere along the way in the very beginnings of the industrial revolution, the whole industrial paradigm was subverted into one of art and creativity? What if some culture had rejected the industrial model -- if the Sabots in France had been successful -- and that mechanical knowledge had been rerouted into some different direction? What kind of culture would we have then?

In its origins, Songs was my attempt to answer that question. 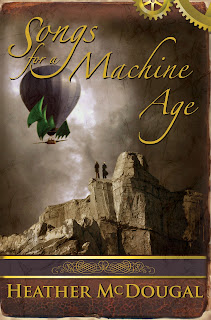 Songs for a Machine Age

There is a place where fabulous clockwork Devices fill Festival streets with color and sound.

Where the Gear Tourniers, in their places of high learning, keep alive the memory of the cruel horrors of an industrial past, now overthrown.

Where the skill of the hand and grace of the body are markers of true belief...

Heather--I had only a very small idea of the origins of your story. I knew it had to do with a robotics class, but the rest??? Now I see so much more of your story! Thanks for sharing, love.

Heather, I'd love to see your dancing robot. I don't suppose you've done a youtube video? ;)

Your novel sounds awesome, and I look forward to reading it. Congratulations!

Oooh, Karin! What a good idea! A youtube vid of the original "clown engine."

Hmm, that's an interesting idea. I could do it, but actually I think I'll post the little sculptures I made for the Indiegogo contributors instead. They're windup! And they dance!