Why I Wrote Searching for Slave Leia

Back in March of this year, Sandra McDonald guest posted here on Heroines of Fantasy. That post sparked a story, that...you know what? She tells it much better. I'm just going to welcome here here, and say how honored I am to have her once again guest on Heroines Of Fantasy.

Take it away, Sandra!
Remember that scene in the The Empire Strikes Back when Darth Vader, prior to interrogating Han Solo, strips away his clothing and leaves him shivering in only his little white Rebel Alliance boxer shorts? Or later, in Return of the Jedi, when the Emperor is ready to kill Luke Skywalker but first makes him put on a thong and some body oil? Probably not. Maybe I'm thinking of the blooper reel.

Or maybe I'm still annoyed at George Lucas for stealing away Princess Leia's perfectly good mercenary uniform in Jabba the Hutt's palace and sticking her in a metal bikini with a chain and collar around her neck. I didn't actually realize how annoyed, however, until I wrote a guest blog post earlier this year here at Heroines of Fantasy. My thoughts about the ridiculous costumes for science fiction and fantasy prompted some interesting debate and comments, and thank you to those who contributed.


After the blogging, I tried to let that bikini go. Believe you me, I have bigger things to worry about than a thirty year old costume decision. But, like a grain of sand in an oyster (or an Imperial thong wedged you know where), it continued to irritate. It spiraled me back in time to when I was a teenager in Revere, Massachusetts, standing in line to see Return of the Jedi after years of angsting about Han Solo trapped in carbonite. In a lobby surrounded by hundreds of other Star Wars fans, I looked up and saw a promotional display of all my favorite characters fully garbed except for one, who barely wore anything at all. I wasn't completely outraged by the display, but my disappointment grew during the movie. The leading heroine of the Star Wars universe is reduced to a sex object who is stripped, chained, sent to a hair and makeup salon, and put on display in front of her friends. Who even knows what Jabba does to her with that big slimy tongue? 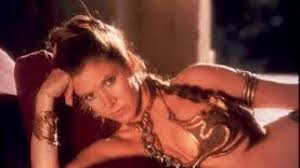 Since 1983, Slave Leia – a demeaning epithet that Her Royal Highness and future Mrs. Solo (per the books) would probably not mention at Senate cocktail parties -- has entered into Star Wars canon as a symbol of sexiness and power. She persists in pop culture today. There's a Slave Leia Appreciation Society, Kim Kardashian's Leia costume, and Slave Leia Perfume.  You can make your own Slave Leia costume for under $30.  Or you can buy one on Amazon. I'll let you discover the dubious joys of Slave Leia fanfic on your own. I admit to enjoying Kaley (The Big Bang Theory) Cuoco's funny public service announcement about the preponderance of Slave Leia in cosplay over on YouTube. Slave Leia, it seems, isn't going to go away anytime soon.


Neither was that grit in my gut, which writers know is a sure sign to start typing. Soon I was hammering out a new story that incorporated not only my feelings about Star Wars but also my experiences as a woman who worked in Hollywood and my observations as a science fiction fan over the years. The result, Searching for Slave Leia, may at times be tongue-in-cheek, but it's also one of my most autobiographical stories. My father's car shows up, as does my favorite Boston movie theater and the first temp agency I worked for when I moved to Los Angeles. (It's gone now, replaced by an office building.) You'll also see CBS Radford Studios (now called Studio Center), where I worked with a producer in a development deal with Dreamworks. That lot -- that field of dreams -- is still one of my favorite places in Los Angeles. The title of the story is a reference to the excellent documentary Searching for Debra Winger, which examines the trials and tribulations of women "of a certain age" in the entertainment industry.


To my delight, Searching for Slave Leia sold quickly to the great magazine Lightspeed, and is being published this month in Kindle ebook and online. Lightspeed is also sharing it with the io9, one of the hottest and largest destinations on the net for sf and fantasy fans. Thank you to the folks here at Heroines of Fantasy for inviting me to do that guest blog and awakening the irritation within.  Everything is fodder for a writer, even gold metal bikinis. But I'm still waiting for that scene with Han Solo in his underwear. 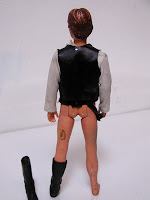 Since her last post here, Sandra McDonald won a Silver Moonbeam award for Children's Literature for her gay YA adventure Mystery of the Tempest (written as Sam Cameron). Her story The Black Feminist's Guide to Science Fiction Film Editing is currently appearing in Asimov's Science Fiction magazine, and she has several other short stories and books forthcoming. Visit her at www.sandramcdonald.com.

Posted by Heroines of Fantasy at 7:00 AM

OMG -- Sandra, I'm so delighted to hear that your visit to HoF last March inspired a story! Good luck with Searching for Slave Leia; I look forward to reading it.

Thank you for another thought-provoking post. Please come back to visit and get inspired as often as you like. :)

I must admit, I was totally baffled by the costume change. I can remember watching as a young teen, feeling really very disappointed and let down by Leia. As an awkward teen still growing into my body, I also felt embarrassed for her. She was a cool chick! What happened?

Now? Well, my children have seen a clip of her during the escape and my youngest (5) asked "Why is she naked?"
So, Mr Lucas? Why IS she naked?!

The costume change threw me, too. In Star Wars, she was covered from neck to toes. Even her EARS were off limits. She was a tough, smack-talking, gun-toting Senator who stared down Darth Vader like he was a petulant child.

And then she's sex slave to a blob of flesh, dressed in next to nothing.

Was this to prove to the world that even the most powerful women can be debased? "Look! All of you! Even the one you look up to the most can be dragged down with nothing more than a whim! Arrr!"

Or was it titilation for the teen-boys and arrested manboys. We ladies had Harrison, Mark, and Billy Dee. What? The boys had Leia? Well, sure they did, but apparently the producers thought boys would prefer her debased, sexualized, and nearly naked. And what does that say about how boys are viewed? Hmm??

In the end, Leia strangles Jabba, even barely clothed, and continues the movie/s dressed as appropriately as she'd been earlier. This is a good thing. It shows, even if what was taken from her slave costume was the worst possible interpretation, that even debased and "powerless" that woman had power enough reclaim her identity.

I blogged about women portrayed in book and film recently, sparked by a debate my son and I have about the best Star Wars heroine (he's 12, so you can guess which trilogy he likes better).

I completely agree with you here! I remember such disappointment in seeing Leia portrayed in this way. Its like Lucas was making Leia pay a price for the rest of the film. As if he was thinking, "You wanna have a hand in this, fire guns with the boys and lead an assault on Endor, first you dress like a slave." Return of the Jedi is still one of my favorites because of Leia's more active role in advancing the plot and fighting, but the Jabba scene still ticks me off as well.

The recent Star Trek film "Into Darkness" also ticked me off in this regard when Carol Marcus decided to change clothes while talking to Kirk - and they filmed it. STUPID! I almost left the theater! I mean, come on, if you're re-booting the Star Trek universe, feel free to make other changes like GIVING THE WOMEN PANTS!

Thank you for your comments and insight.

Wow! This article is four years old! So cool that you found it and read it. I have to say, I love that you had that debate with your son. It's good to know there are more dork (aka, fabulous) families out there doing the same things my kids and I do.

Nice! It popped up on your sidebar. I never checked the date!