I have recently and once again picked up my edits for Beyond The Gate (releasing in August 2013 by Hadley Rille Books.) I already had edits to work from, but just as I was about to begin, someone I asked last May to read for me stepped up to offer her eyes and I jumped at it. When it comes to this particular story, just trust me--it's a good thing to have one more pair of eyes.

(*Jinna is a secondary, yet major character.)

Well, there's a good reason for that--Jinna isn't very nice. She's jealous and petty and vindictive and selfish. Her best friend, Linhare, is exactly the opposite; and when Jinna is less than noble, Linhare makes excuses for her. She always sees the good in her. Linhare tends to see the good in everyone.

To make it simple: Linhare is Melanie Wilkes, Jinna is Scarlet O'Hara. And like Melanie and Scarlet, when it comes down to the very, very quick, they are there for one another. Melanie might be MORE there, but that's just who she is. Melanie/Linhare are givers; Scarlet/Jinna are takers. 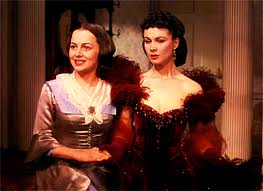 Why did all my readers say the same thing about Jinna? Because I didn't do my job. I didn't commit to her being a not-so-nice girl. When I got the note: Jinna isn't very likeable, I tried to add something to make her more so. Instead of cementing her character, I confused it even more. As I go through the manuscript, she seems to have a split personality. I'm committed now, and I SEE clearly. Don't expect nice things of Jinna.

I don't want to make Jinna a nice girl. I don't want to redeem her. A big theme in Beyond the Gate is accepting who we are, what we are, and being ok with it. Would Jinna throw Linhare to the wolves? Nope. I said she's jealous, petty, vindictive and selfish; I didn't say she is evil. She loves Linhare, a noble emotion! But you can be sure if Jinna does something noble, there's something in it for her.

She has redeeming qualities, and I will work with those; But Jinna is Jinna is Jinna, and I love her the way she is in my head. Now it's time to get her right on the page.

What do you think of not-so-nice characters? Do you love to hate them? Hate to love them? Do they make for a more interesting read, or is trying to figure out why anyone would even like them in the first place distracting?

Terri-Lynne DeFino
Posted by Heroines of Fantasy at 6:00 AM

When they are done well, they make the story more interesting. They also tell you a lot about the main character, usually, because of the interactions and the way the MC will make excuses for the not-so-nice girl.

When they are done badly, they are a distraction. My two cents, anyhow.

Hey, Kelly! Thanks for stopping in.

I agree with you, and I'm afraid that right now, Jinna is a distraction because she's no consistent. By the time I'm finished with her, she will be. I hope!

This is great advice--paying attention when something not working in your writing is consistently pointed out to you. That's why you're so awesome. You listen!

It really does depend on the story and their role in it--kind of like such people in real life! If the not-so-nice girl is friends with the protagonist main girl, there has to be *some*thing likable about the not-so-nice one, or else I really doubt the main girl's judgment. But selfish and self-centered and even somewhat mean people can be likable, so yeah, I think it can be done.

Francesca--I think that's why I kept trying to make her likeable, because WHO would like her if I didn't? She is a lot of fun, adventurous. Jinna evolves a bit--perhaps I should say she matures. We're all a bit egocentric when we're young, eh? ;)

Hi Terri! You've probably heard everything I have to say on this topic, so just stopping by to say, "You go, girl!"

Can't wait to see Beyond the Gate in print. :)