As always, our grand-high-mystic-poopah and editor-in-chief, Eric T. Reynolds gets to usher in the New Year at Heroines of Fantasy. Considering HoF is now the official blog of Hadley Rille Books, it's even more appropriate than ever.

There are changes as 2014 tumbles in, but one thing remains the same: Heroines of Fantasy and Hadley Rille Books remains dedicated to presenting all kinds of amazing female characters, writers, and artists to our readers. Don't misunderstand, we love our men! And a good character is a good character, whether a heroine, hero, noble or wicked. But let's face it--there is no shortage of all kinds of well-rounded male characters or writers. The women are gaining ground, and we aim to help that along as we always have.

Happy New Year! Eric, you're up!

In recent times, it seems no matter what the market demands, we still see many movies, books, and games with old-fashioned female stereotypes that deviate from reality, even when more normal portrayals of women are desired by much of the population. Why are we continuing to see this in twenty-first century Earth? And what do we think about that at Hadley Rille Books?

For example, Cartoon Network canceled the series Tower Prep apparently, we’ve learned, because the female characters were too smart and too interesting. A recent post about it caused an inevitable reaction in social media and a possible movement to write and publish only female lead characters in 2014.

At Hadley Rille Books, we already had our line-up for 2014 when I saw that post. I double-checked: All our fiction (short stories and novels) for 2014 will have female lead characters. This wasn't really intentional, but it isn’t surprising since much of our focus has been on producing works with female leads. Our book covers will also have accurate portrayals. But many fantasy book covers still don’t. They show women in nearly impossible poses, fighting with swords while wearing revealing outfits and high heels. We know it’s fantasy, but one shouldn't still have to suspend disbelief to accept it. Except that many are so used to it, it’s often the norm. (Here's a real woman, Samantha Catto-Mott, who wields a sword. She was the first woman to win the Longsword Competition.)

About a year ago, author Jim C. Hines blogged pictures of himself mimicking poses from fantasy cover art. In the comments, someone told him to do more of those and Jim’s reply was "Heh . . . Sorry, no more until my back recovers." Even if the characters inside a book are realistic, the cover often isn’t.

For a while, we were using the expression "strong female characters" to describe many of our protagonists, but we realized that wasn’t accurate. A post I Hate Strong Female Characters by Sophia McDougall brought to light that not all female characters are "strong." And the question was: why aren’t male characters referred to as "strong male characters?" We found many of our characters don’t fit that description anyway, so we came up with the expression "true heroines" to describe the protagonists in our books.  That is, characters who are real and span all spectrums of personalities, flaws, strengths and weaknesses. Just like people all around us. This is also true in our Archaeology Series, novels that show what life was like from the point of view of women of ancient times, women who were common people.

So what do we at Hadley Rille Books do? Simple. Produce the best books in the world with an emphasis on realistic female leads with cover art and advertising that accurately reflects that. Our line-up in 2014 is: Ice Magic, Fire Magic by Shauna Roberts; High Maga by Karin Rita Gastreich; Three Great Lies by Vanessa MacLellan; After the Ruin by Harriet Goodchild; and a new anthology called Ruins Excavation (edited by Rose Reynolds and me) in which all protagonists will be Women of Color Archaeologists. (We have an open call for submissions for this anthology, deadline January 31st. However, we’re considering extending the deadline a bit.)

I hope you’ll join us in the adventure. 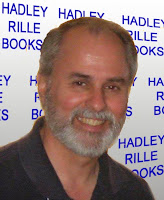 Thanks so much for this great post, Eric! I really appreciate the vision you have for Hadley Rille Books, and feel very privileged to be a part of this endeavor. 2014 is going to be an awesome year for the press! I can't wait to read the new titles.

Women of Colour Archaeologists? Damn, why isn't this out already?

B--Maybe you could cook something up for us? :)