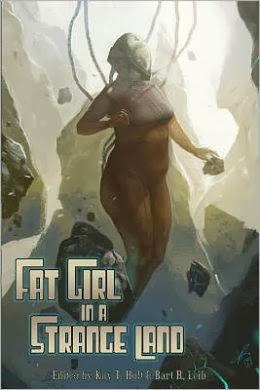 Hi there, HoF readers. I’m Julia, Hadley Rille author and your official Book Review Herder, and it’s finally rolled around to my turn to post a review. I thought I’d start with one of the many interesting finds I gathered at last year’s WisCon from the fine folks at Crossed Genres Publications: an anthology with the intriguing title “Fat Girl In A Strange Land”.

You can probably tell just from the fact that I attended WisCon (and am involved with a blog called “Heroines of Fantasy”) that I’m someone who is interested in speculative stories about/from historically marginalized perspectives. And as a woman who has been solidly (see what I did there?) on the “fat” side of the weight spectrum her entire adult life, I was intrigued by the title and concept of this collection, described as “an anthology of fourteen stories of fat women protagonists traveling distant and undiscovered realms.” Would the experiences and attitude of these fat heroines mirror any of my own, and make the characters and situations extra relatable to me as a reader? And how would the speculative elements fit in? Would fatness itself perhaps be used as magic, or impact technology? I was especially curious to see whether weight and body image issues would be the central subject of each story, or whether the plus-size of any given protagonist would be normalized as just another physical descriptor.

On the one hand, I feel like it’s critically important to encourage more stories that speak specifically to the experience of being a fat woman, whether that is related to the speculative element or not, because the more we have access to each others’ specific experiences, the more we can relate to each other (and the more we can relate to each other, the less likely we are to cause each other harm. Theoretically.) On the other hand, I also agree with the argument that one of the goals of creating a rainbow of fictional protagonists of diverse shapes, ages, colors and backgrounds is to equalize all experiences, so that a size 20 heroine isn’t remarkable unless her size is specifically relevant to the story. How would this anthology approach this, ahem, weighty debate over specificity vs. normalization?

The short answer was, in both ways. In some stories, like the beautiful “La Gorda and the City of Silver” by Sabrina Vourvoulias, where a woman who wants to become a luchadora uses her size, strength and courage to also become a folk hero and savior of women and children, the cleverly-written-through-journal-entries sci-fi story “Blueprints” by Anna Caro, where the heroine is part of a group of people who cannot leave a dying Earth for a new planet because of the weight restrictions for FTL travel, or the heart-warming “Lift” by Pete “Patch” Alberti, where the heroine who is rejected from the “popular” kids’ spaceship because of her weight builds her own spaceship with the help of an elder fat mentor, the heroine’s size was central to the story and the story wouldn’t have been the same without it. In others, like the fairy-tale retelling “Tangstwyl the Unwanted” by Katharine Elmer, or “Davy”, a tale of conquering literal manifestations of post-partum depression by Anna Dickinson, or “How Do You Want To Die?”, a chunk of sword-and-sorcery tinged desert adventure by Rick Silva, the heroine’s size seemed like inconsequential flavor to the story, just one more piece of character description. I appreciated that the anthology editors were likely trying to present both kinds of stories, but I found myself enjoying more the ones that specifically revolved around the heroine’s size and her issues related thereto—probably because it still seemed like a refreshing rarity to experience a story from that specific point of view.

Like many anthologies, I found the stories here somewhat uneven from a writing point of view—some were certainly better than others in both concept and execution (though some of that may be personal taste, and of course your mileage may vary). Some, like “How Do You Want To Die”, “Sharks and Seals” by Jennifer Brozek and “Marilee and the S.O.B.” by Barbara Krasnoff, felt like excerpts from a longer work or derived from an already existing/previously developed story world rather than stories complete in themselves, which I found vaguely frustrating. Some stories, like “Nemesis” by Nicole Prestin where a “size 14 soccer mom” superhero refuses to wear a spandex uniform and has to deal with mocking by her teammates and the public, touched my experience directly and felt true and relatable even when they were not necessarily perfect pieces of literature. Some stories, like “The Right Stuffed” by Brian Jungwiwattanaporn about fat women recruited by the military as counterintelligence agents in the digital Void because they’ll be less squicked at “eating” data, felt more clumsy or stereotypical in their attempt at imagining what it might be like to live in a fat body and what issues a fat character might have.

Julia, I really enjoyed this review and am so happy to see works like this featured on Heroines of Fantasy. Thank you!

Julia...you crack me up, woman. Awesome review. Thoroughly enjoyed reading it. I am heading over to Amazon right now to check out this book. I think it would make a pretty killer book club choice.

Me, too, thanks to your review. Can't wait to read it.