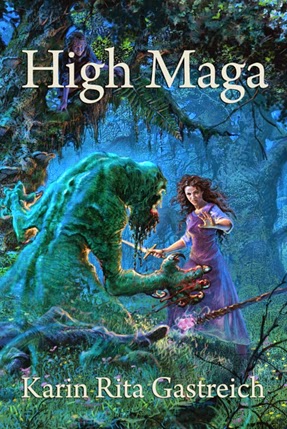 I’m going to be rather unfair on High Maga and compare it to a book where the story was near perfect: Eolyn, its predecessor. Presumably you have read Eolyn. If you have not, go now and do so because it’s excellent.

Eolyn began rather like a classic fairy tale, with a small child getting lost in the woods and encountering a witch. This set the tone for its mix of gentle companionship, friendship, love and sporadic but brutal violence. There was a definite pattern of recurring loss leading to hope, trust (sometimes misplaced), unexpected loyalty and a lasting love.

High Maga, on the other hand, is much more about attempting to stave off inexorable forces and despair, emphasised by the growing body count. Here even the love story becomes double-edged and a potential source of calamity to a far greater degree than ever in Eolyn.

Of course Eolyn was entirely self-contained. High Maga is very clearly not merely a sequel but also the middle of a trilogy. In many ways I am reminded of the first two Star Wars films (before Lucas betrayed a generation by chasing the toddler market). The first eclipses the second in the purity of the storyline, the second rises above the first through its darker themes and grittier tone, though High Maga, unlike The Empire Strikes Back, has a definite and fitting end, albeit with enough plot strands trailing to make a third book obvious and necessary.

Even the villain is different. Tzeremond was, of course, far and away the best character in Eolyn. Steadfastly loyal, scheming, clever, concerned, utterly convinced that he was right. My kind of chap really. And how he’s missed too. Tzeremond alive would have, as a character notes, been a tremendous asset in the defence of Akmael’s kingdom. Indeed with Tzeremond alive the whole sorry situation that causes so much grief here would very likely not have arisen. Defence is needed because while the events of Eolyn progressed steadily towards conflict but at a fairly gentle pace, here the start is more viscerally violent and fairly soon, after some excellent relationship complications affecting several characters, the book is almost wholly concerned with war and its consequences.

Which brings in the villain. Or rather the two. One is a sultry, ruthless, superb, demon-raising sorceress – very memorable, though not so much as her uncle who is an admirable counterpart to Tzeremond, albeit with none of that worthy’s virtues save courage. Tzeremond was never amoral or even immoral, by his lights, and did not revel in brutality. Mechnes is and does and is far more menacing, having a decidedly physical edge to add to a force of character at least equal to Tzeremond’s. Much as Vader steals the show in Episode V, Mechnes bestrides High Maga as a colossus.

And that brings me on to something that I found very different between High Maga and Eolyn. Although Eolyn used the fashionable multi-character perspective approach with essentially different chapters focused on a single character’s perceptions, it always felt to me that Eolyn herself was definitely central, with Akmael, Corey and Tzeremond in important but definitely supporting roles. In High Maga, the strength of Mechnes’ character magnifies him above the rest and Eolyn herself is a trifle diminished by this. While Akmael remains strong, what surprised me was how much Corey seemed to fade. In Eolyn he seemed more witty, barbed of tongue and devious than he does here. I’m not sure he is in fact less witty, catty or devious but he appeared so to me, which was a shame, but perhaps inevitable as other characters besides Mechnes imposed themselves also.

The best of these is young Ghemena, one of Eolyn’s pupils and a shining example of childish grit. One thing I really like about both books is how the characters remain utterly true to their innate characters (Eolyn, for instance, is an astonishingly bad judge of character in many ways, for instance surely every reader of Eolyn had Tahmir marked as a wrong ‘un from first meeting . . .). Ghemena is a stand-out example of that realism: her age is her weakness and has a shattering impact on her ability to influence events as she would wish, and sows some extremely interesting seeds which may bear fruit in the third book. But Borten (who slew Akmael’s father in Eolyn) also rises in importance and provides an interesting twist to the plot. He’s probably the most straightforward of the characters except for noble old Drostan, who also features.

Crucial too is Adiana, one of Eolyn’s friends from Corey’s travelling troupe. She’s definitely the chief ‘supporting actress’ and, alongside Mechnes, probably the most interesting of the cast, though Ghemena is certainly my favourite. She probably suffers the most and how she copes exemplifies a certain sort of strength – guts, even – that is very often mistaken for weakness, submission, even collaboration. She is almost the opposite of little Ghemena – whose spitfire defiance is easily taken as a sign of courage, though in fact it is generally born of fear. Adiana may well be driven by a simple desire to survive, but survival in her circumstances demands courage to face the future.

And facing an uncertain, and undesirable, future is in the end what High Maga’s about. I mean obviously it’s about danger and demons and battle and flight and separation and love torn asunder and betrayal and all that sort of thing too. But as I said at the start, Eolyn seemed to me to be about hope and loss and also about choice between love and duty, whereas High Maga is more about despair and facing up to inexorable fate.

The end of Eolyn captured perfectly the whole sense of the book, where choices had consequences and love often conflicted with loyalty. Eolyn’s final choice really tied it all together and was immensely satisfying – it felt completely right and once it had been made, her alternative, which appeared very reasonable beforehand, was obviously wrong. I found the end of High Maga less satisfying. That is I think partly a consequence there actually being no right choice here – High Maga ends with a dilemma – but it’s also a consequence of there being a clear need for a final book in the trilogy. Let me be clear though, the ending of High Maga is just as fitting, it just doesn’t have the unexpected but in hindsight obvious sort of conclusion that ended the first book. That I think shows a welcome avoidance of formula and it’s also the case that no other ending would have done.

High Maga has been written in a way that probably allows it to stand alone well enough, but I think anyone who has not read Eolyn will miss a lot of the impact of many of the events herein. It’s a more powerful story than Eolyn but requires the context of that more perfect one to fully appreciate. When High Maga itself has a sequel and the trilogy is concluded, then I think it will feel entirely complete and take its proper place in the cycle in a way akin to The Empire Strikes Back. Hopefully though there will be nothing akin to ewoks in book three . . .

It’s a great read and in parts some may find it harrowing – but the tone is fitted to the subject matter. You’ve presumably read Eolyn to have read this far, so buy High Maga and prepare for an altogether rougher ride. It’s worth it.

review by David Hunter
Posted by Heroines of Fantasy at 4:28 AM

Dave, thank you so much for taking the time to read the novel and post this detailed review. I promise no ewoks for the third book. Though now that you mention it, it might have been fun to give Ghemena an army of evil ewoks...

I agree--Mechnes was such a huge, imposing, menacing character that he eclipsed all the others. And by that token, Adiana, for her role in that storyline.

SHE was my favorite character in this book. I love me a spitfire, but I will take a quieter survivor every time. As David said, Ghemmena's fury is her reaction to fear, and is admirable--but Adiana's absolute determination to stay alive says she has hope that will not die. She is the character with the most grit, IMO.

Mechnes--you don't know how often I think of him as a character. I remember Karin saying how she could only write him for so long without taking a yick-break. He was deplorable, brutal, sadistic--but she drew his character so well that I understood him, his motives. Truly, one of the best-written characters in any book I've ever read.

(And I adored Renata and her heart-wrenching storyline.)