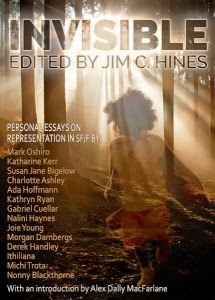 A few months back, Alex Dally MacFarlane wrote an article suggesting that science fiction writers might want to include more than just Straight White Males in their stories.  What should have been as controversial as “you should bathe regularly” created an amazing swirl of controversy on the Internet.  Invisible is a response to that controversy.

Blogger, author and (full disclosure) personal friend Jim C. Hines is a Mark 1 Straight White Male.  However, he offered his blog to various people who wrote moving essays about being other than Straight White Male, and what it meant to them to read (or not read) of people who were more like them.  Jim then collected 13 of those essays into this slim ebook.

The essays are all exceptionally well-written, and speak powerfully to the experience of being Other, as well as the help one can get by reading the right book at the right age.  Writers varied from an albino (have you ever seen a not-evil albino in fiction?) to people of various genders, orientations and races.

As an author, I want to entertain people.  I want to affect them in some positive way.  Reading the essays in Invisible helped me better understand how to do that.  As a businessman, (and all writers should be people of business) Invisible pointed out that non-Straight White Males have money and are interested in science fiction.  Providing them characters they can identify with can be profitable.  As an artist who happens to be a Straight White Male, part of being a good artist is an ability to populate your book with other than clones of yourself.  Invisible gave me some thoughts on how to do just that.

If you want to be a writer, you should do yourself a favor and read Invisible.
Posted by Heroines of Fantasy at 6:00 AM

Sounds like a great endeavor, and a worthy one. Thanks, Chris--and Jim!

Give me a break. It's good to see some more visionary thinking getting into sci fi. There is a rich and diverse market out there for this genre; all it takes is the right set of stories to keep opening those doors.

Thanks for another great review, Chris!