The Mighty Thor asks: Where the Ladies At? 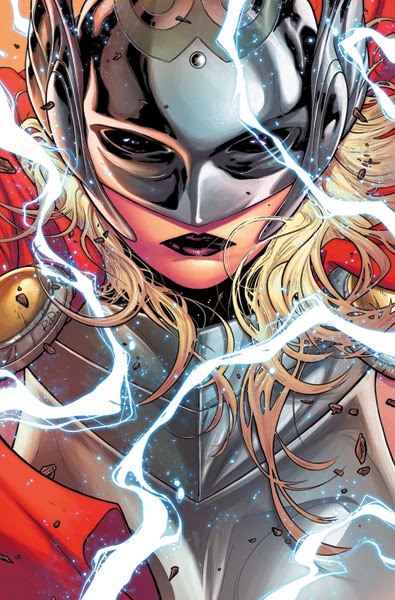 In the comics, all to often, it requires first that you be an offshoot of an established male hero. The latest, of course, you probably saw in the news: in the future, there will be a female Thor.

This is a little different than previous female counterparts to male heroes, ala Batgirl, Mary Marvel, Supergirl, Spider-Woman, Stargirl, Zatanna (after her dad, Zarara) and others. This time, it's all about the hammer of Thor (it's called Mjölnir) being taken up by a so-far unknown woman after the original Thor can't pick it up—because only the worthy can wield the might uru hammer. It says so right on the side: ""Whosoever holds this hammer, if he be worthy, shall possess the power of Thor."

I get it that in the decades and decades of intellectual property rights in comic books, that the creators must constantly return to the well of established characters, both to keep them interesting or completely revamp them, so those copyrights can stay fresh fresh fresh. The last thing Disney or Warner Bros. wants is a lapsed copyright, as public domain characters don't make money for the owner.

In Marvel's defense, at least this time it’s not going to be some "Thorina" who's just a glorified sidekick. (Valkyrie arguably already is that knockoff. And she might even turn out to be this new Thor.) Maybe it'll even bring in new readers of the female persuasion to the comics, though I remain a bit too cynical to think it's that simple a fix after sixty years of writing comics mainly for 11-year-old boys of any age.

But it got me thinking... what if great works of fantasy and scifi went through the same constant, unending need for new content that comics did? What female knock off characters would we get?

Bilbobina Baggins—She knew, once she met the handsome Gollum, she'd put his ring on it.

Antonia "Buck" Rogers—the 25th Century can't imagine how fabulous this lady from the 20th is.

Endoria Wiggins—I got nothing, but I know, if Orson Scott Card wrote it, she wouldn't be a lesbian.

The list could go on and on. Hellgirl, Sharrie Potter, Joan Carter of Mars, Captain Jane T. Kirk...

But would we ever see a male take on Ellen Ripley? Dorothy Gale? Mary Poppins? Buffy? Xena? Anita Blake? Lucy or Susan Pevensie? Dana Scully? Disney princesses like Belle, Ariel, and Merida? Would you ever see a male Katniss?

No. And we don't need to. Not even for copyright protection purposes.

Of course, we've seen all of these types of characters as dudes... but I'm talking about an actual male Katniss. Hell, we don't even get to see male versions of original female super-heroes. There's no Invisible Man (well, not to match up to Susan Richards). There's a Wonder Man, but that was more about Marvel stealing a copyright from DC. Where's the Black Widower? The Scarlet Warlock? Big Bard? Power Boy (showing his lack of chest hair)? Black Canary...Guy?

There is a Catman, however. One down!

All of this is to say: there aren't enough original female super-heroic protagonists. Period. Even today, as woman are by far the biggest readers in our culture. It's a frustrating, embarrassing imbalance still. A lady Thor may help, but for now, it just underscores that a whole new character with the same marketing push might have been the way to go.
Posted by Heroines of Fantasy at 5:00 AM

One thing I can ALWAYS count on when Eric's (Griffith)up is a laugh. Dude, you crack me up.

You have to give Marvel props for at least making the attempt to give some originality to this rather than doing another "Batgirl." Thor loses his grip (pun intended) and she is the worthy one who takes up the hammer. It's about the object, not the personage attached to it. Ok. I'll make the stretch and let it go.
But you are right, and I've heard it a few times now--we need more original female characters, not those who riff off a male character. Don't get me wrong! I love me some Wolverine! But I don't want to see a Wolverina. No, no, no.
Great post! Thanks!

Eric, you've said it so well I have nothing more to add. Thanks for another great post!