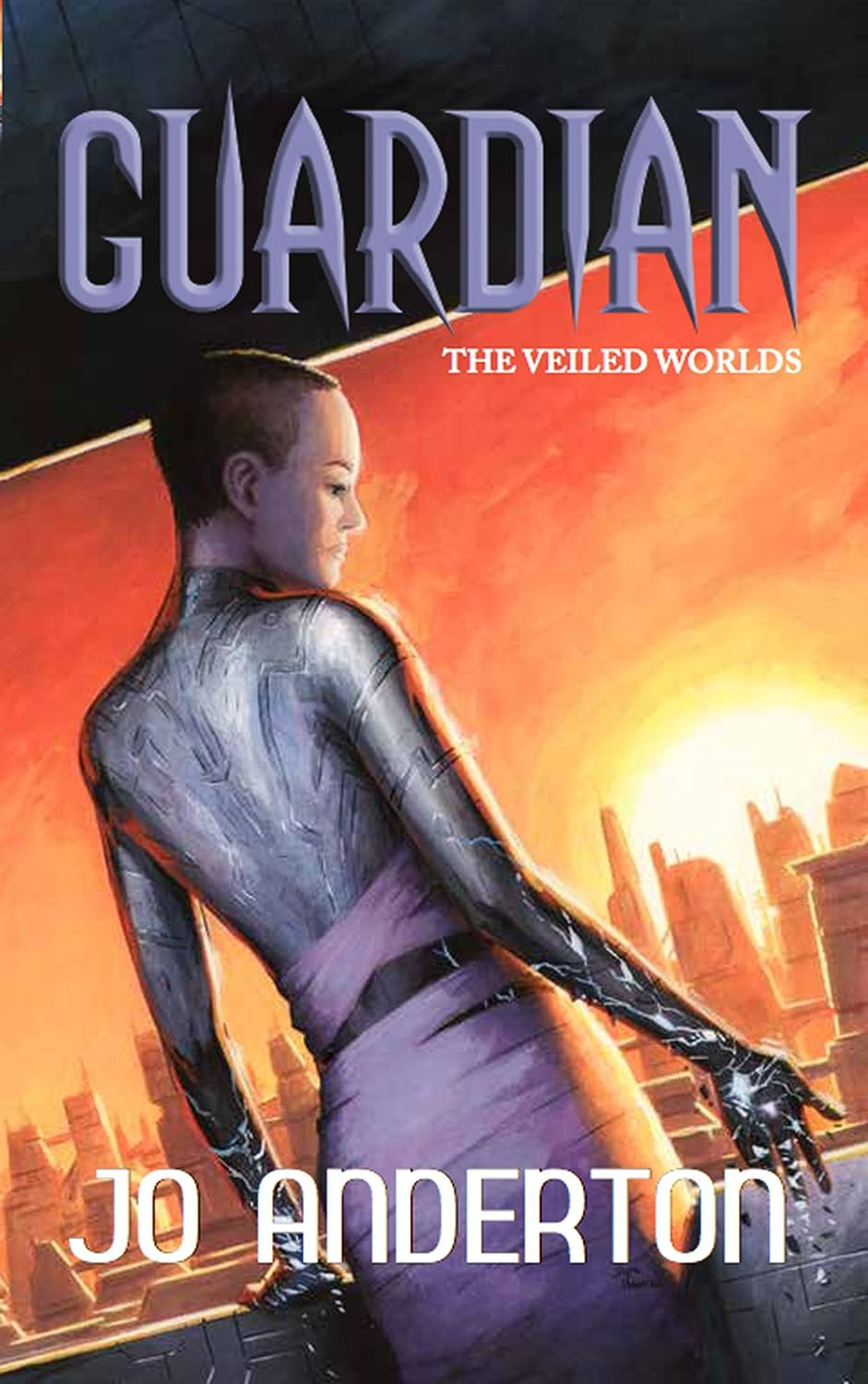 Title: Guardian
Author: Jo Anderton
Publisher: FableCroft Publishing
Publication Date: June 2014
Genre: Science Fiction
Price: $7.99 Kindle or $15.09 Paperback
Where to Purchase: Amazon or Barnes and Noble
Reviewed by: Cybelle Greenlaw
Book Description: The grand city of Movoc-under-Keeper lies in ruins. The sinister puppet men have revealed their true nature, and their plan to tear down the veil between worlds. To have a chance of defeating them, Tanyana must do the impossible, and return to the world where they were created, on the other side of the veil. Her journey will force her into a terrible choice, and test just how much she is willing to sacrifice for the fate of two worlds.

Good afternoon! Cybelle here with another Wednesday review. This week, I enjoyed reading Guardian, the third book in Jo Anderton's Veiled Worlds trilogy. Since I hadn't read the first two books, I was a little concerned about starting at the end. However, it is an outstandingly engaging read and works well as a stand-alone novel.

Anderton's story takes place in the distant future, where two worlds are separated by a Veil. Doorways between the worlds have been opened, and sinister puppet men that developed within the Veil threaten to destroy them both. The heroine, Tanyana, was once a high-ranking architect with the power to manipulate pions, the basic fabric of her world, but an accident reduced her to the lowly station of debris collector. Disgraced and shunned, Tan is forced to have a silver suit drilled into her bones, which leaves her scarred but almost indestructible. While battling puppet men in the Veil, she is swept into the world on the other side. There, she must convince the programmers who watch over the Veil to help her. Her difficulty is compounded by the fact that a powerful, destructive force, known as a flare, has attached itself to her body. She is rendered physically brittle, unstable and highly explosive. She had also been pregnant, and her unborn child has been taken out her body without her consent. Its unusual gestation has given it strange properties, and the programmers have found they can use it as a sort of energy conductor. Tan soon realizes that one of the programmers, Lad, had a strong connection to her in her own world, and he still feels obligated to protect her in his own. Their journey leads them into a confrontation with an ancient being known as the Hero, a man whose consciousness had been uploaded into the Veil long ago in order to protect the worlds. Over time, the Hero became demented and cruel, so a program called the Keeper was created to take over the job. The puppet men, however, threaten to destroy the Keeper and bring down the Veil. Tan comes to understand that only she and her infant can control the multitude of rival forces that threaten the worlds.

The pacing of this novel is impressive, and the characters are wonderfully rich. Most are as badly scarred as the worlds in which they live, but their humanity and resourcefulness shine through. Tanyana's story is interwoven with that of her colleague and love, Kichlan. Anderton does a wonderful job of bringing them together from opposite sides of the Veil, as  they are drawn by the unknown properties of the materials they were forced to share. The structure of the worlds is mysterious and fragile, and the reader comes to understand it as the characters do.

This book was really an unexpected pleasure, and I look forward to reading the first two in the series. I definitely want more back story on the characters, but I loved the fact there were no data dumps whatsoever in this novel. References to past events were subtle but provided enough clarity to understand motivations and actions. I highly recommend it!
Posted by Heroines of Fantasy at 4:33 PM