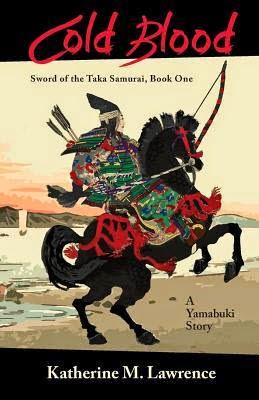 BLURB:
Sixteen-year-old Taka Yamabuki, royal by birth, but samurai by training, embarks upon her first mission: to deliver important dispatches to the capital. Untested and traveling alone for the first time in her life, Yamabuki encounters a vivid tapestry of natural beauty, unusual characters, unexpected friendships, and indiscriminate brutality and violence.

But an unknown assassin dogs her trail. And before she knows it, her life hangs in the balance.

A lyrical novella of adventure, young love, and self-discovery, Cold Blood brings alive the experience of a young woman warrior in 12th-century Japan.

When you’re bopping around looking for a new sword swinging read and you come across a tale of historical fiction based on the factual accounts of Yamabuki, a female Samurai from 12th century Japan, it’s a real eye catcher. First: there were female Samurai? Yes, apparently so and notable ones too.  I had some vague idea there had been, but  had seen no more concrete evidence of such creatures than I had of Bigfoot. Of course, I had also never looked for said evidence which may have contributed to my failure to find any.
I downloaded the sample of this in fear. (Fear ? No Samurai I.) Why be afraid of a downloaded sample from an author you’ve never heard from a press you’ve never heard of? Well, because I really, really wanted this novella/novel (132 pages by Amazon’s word count) to be good. According to her profile the author, Katherine M. Lawrence, has the academic and life credentials to pull this off, but too often the “credibility” and desire to tell a story does not a storyteller make. Fortunately, in this instance it did and before completing the free sample I bought the whole shebang.

As I was hoping, Cold Blood not only shows you the beginning of Yamabuki’s story as a teenage Samurai, also contrasts her life to that of the woman she would have been had she not opted to tread the warrior’s path. That draws out one of the best elements of historical fiction which is when it educated as well as entertains.  One thing you should know is that the period of Japan typically shown in Western media, like Tom Cruise’s The Last Samurai which was set in the 19th century I believe, whereas, Yamabuki’s story takes place seven hundred years earlier. As the Lawrence herself says: “The 12th-century Japan was very different from the 17th century. This required leaving behind fond images of geisha, two-sword samurai with shaven pates and topknots, ritualized harakiri, Japanese baths, tatami mats, tea ceremonies, and a host of other things . . .” Now that said . . .

The early parts of the story do not move quickly nor are they filled with tension or suspense. That’s not to say that there aren’t many hints and observations by Yamabuki that make it clear that things are a’brewing it’s just that, as I recall it, there was no deadline as to when the important dispatches to the capital should arrive and the “fate of the country” wasn’t hanging in balance. She simply goes about arranging travelling while make close observation of her fellow travelers and even having a romantic encounter. Still, at no time was I bored or worried that major conflict would not be forthcoming, in fact the pace of the story mirrored the feel of the times, which was probably and intentional choice by the author. I can’t tell you why I believe that because it would be a spoiler. In fact, revealing any of the interesting things would be spoilers because they are all weaved together to create a strong ending in which Lawrence was deft enough to play off of reader’s expectations (and my own personal fear this story might tread down the well-worn road toward a condescending but common type of development) to create surprises toward the end which makes me confident she knew what she was doing. You don’t write an excellent story by accident.

Heck, it was so good I immediately bought a satellite novelette by Lawrence featuring Yamabuki called Cold Sake, and it takes something special to get me to venture below novella length. I highly recommend Cold Blood and I for one am eagerly awaiting the next book in the Sword of the Taka Samurai series, Cold Heart, coming out in March.