Harriet Goodchild: The moments between the present and the future


Valentine's month is all but up, and so is Love Fest. In this last extract considering love and longing, I'm introducing you to Te-Meriku, the deuteragonist of After the Ruin.


The old king of Lyikené has named Te-Meriku as his successor. This sudden elevation has caused Te-Meriku's estrangement from his lover, Imacah...


A hand thuds against the oaken door. He wakes all of a piece, lies in his bed considering who might disturb him so early in the day. Another thud, loud as the one that woke him, rattles the door and his question is answered by the voice calling through the lock. He slides from between the sheepskins into the cold air and draws back the bolt.

Imacah stands on the threshold, his eyes a-glitter in the grey morning light, his hair bound back into the clansman’s knot. “Get your knife,” he says, stepping into the room.

“I said, Get your knife!” Imacah’s breath rasps of barleyspirit, but his narrowed eyes are steady and that part of him still sober knows well what he is doing. “My blade is waiting for your blood: you can face it with your own or empty-handed.”

They have fought and played a hundred times, testing their strength and skill against each other, for a wager, for a jest, for the sheer joy of it. Now, as they circle each other across the wide attic floor, he realises he does not know Imacah’s intent, the truth behind the seeming. Imacah is three parts drunk and reckless with it. Unless, of course, this is a feint. Cats play with mice. Easy enough for a sober man to play the drunkard and lull his foe to folly. Or is the drink because he has another, darker, purpose?

And so he continues his wide circles, watching this stranger with Imacah’s face, feeling for a way to bring them both through this with skins intact. Trying to get his measure, he watches him pace and feint and marks the hand holding the knife. Imacah fights with his knife in his right hand but shifts it always to the left before closing for the kill. He has oft intended to remind him of this trick, since a pattern plain to him is plain to others also. For the first time, he is glad it slipped his mind. His life may hang on knowing such a thing. He is but a naked man and, though Imacah has not put on his mail, the leather of his jerkin is thick enough to catch and turn a knife blade. A sennight ago he would have sworn on his life he knew all Imacah’s moods and dealings but a sennight ago he was another man living another life. What does any know of another’s heart? The only certain truth is that the knife is still in his right hand.

Watching the knife, he dodges each sweep and jab, taking care not to be trapped against the wall. More than once, had this been another man, he could have slipped beneath his guard to slash and maim, perhaps to kill, but ’twas Imacah began this and so ’tis Imacah must make the ending. All he can do is wait and hope that, when that moment comes, he can reshape it to his own purpose. So he goes on as he began, dodge and parry, always defence, never attack, and watches the frustration mount in Imacah’s eyes. Imacah can push him so far but no further and so, although this is Imacah’s fight, it is he has the mastery. Almost he laughs to see it.

Almost. Not quite. Only a fool goads a man already drunk or desperate.

Frustration waxes at last into decision. Imacah leaps forward, intent blazing in his face, and, as he leaps, passes the knife to his left hand.

He twists sideways, rolling so Imacah’s thrust meets only empty air, and sets down his knife. “I’ll not fight your battles for you,” he says, standing to face him empty-handed. “If you came here for a kill, I’ll give you one. Strike and be done with it.”

A flicker in Imacah’s eyes. “You bastard whoreson.”

He laughs. “So I have ever been, clansman.”

He smashes his fist into Imacah’s gut. Imacah doubles up, grunting and gasping, and he follows with the other to his face. “I’ll take that name from no man, not even you.”

He steps back to give him room to recover his breath and wit, watching always the knife still held in his left hand. Slowly, awkwardly, Imacah stands, his face a confusion of thought and barleyspirit, his eyes dark and glittering in the hard morning light. Blood trickles down his cheek from brow to lip; his left eye will be black and swollen shut tomorrow, if either lives long enough to see it. Light plays along the bronze blade of the knife, a-tremble in a shaking hand.

In answer, he reaches out and closes his hand over Imacah’s. Taking the knife from the slackened fingers, he sets it beside his own.

“So cold without you,” Imacah whispers, “so alone.”

Gently, carefully, he puts his arms around him, feeling him at first a stranger then slowly relax into the man he knows. “I am still myself. There’s nothing need change between us.”

Imacah cups his face between his hands, staring long and hard from overbright eyes until, perhaps, he sees what he wants and pulls him close for kissing. Imacah’s mouth tastes of blood and salt and barleyspirit but his eyes are again his own. At that, his heart soars free into the sunlight because he has come back. “You and I,” he says. He works his fingers through Imacah’s black hair, untying the knot and tossing aside the scrap of grass-green silk. Wrapped in each other, they stumble and tumble onto the bed and, for a while, all is as it should be between them.

And yet, and yet, after the morning, everything is changed. He has had the mastery, and both know it. They speak, carefully, of little things: an arrow’s flight into its mark or a litter of hound pups. Never of ships or swords or the north country. Only of the present; never of the future.

Half a month slides by: quiet days, fierce nights. He lies on his back in the heather, staring into blue beyond blue, his thoughts drifting with the eagle across the afternoon, anywhere and nowhere.

“The moon is dark tonight,” says Imacah beside him.

“Apples,” says Imacah, tossing his knife from hand to hand, “a reckoning with the king’s men.”

He rolls onto his side to look at him. The bruise about his eye has faded to a sickly yellow. “No.”

“A month ago you were quite willing.”

A month ago the world was a different place and he a different man. He shakes his head. “I cannot. Not now.”

He reaches out and Imacah’s arms close round him, returning his embrace. Pressing his face into his shoulder, he hears Imacah’s heart beat out the moments between the present and the future. Silence between them, a silence waiting for his answer, but no words will come. He can do no more than hold him close and hope love is enough.

Imacah pulls roughly away to stand over him, his knife held in his left hand. At the look on Imacah’s face, something breaks inside and at last he screams aloud, a word, a sob, a cry into the tall air for his lost soul. “Imacah!”

No answer. There will never be an answer. Where Imacah has gone he cannot follow. He can only watch as he walks away across the heather into a future he cannot share. The eagle sweeps across the hillside, banks and stoops, drawn to some carrion, no doubt, out of sight beyond the ridge. 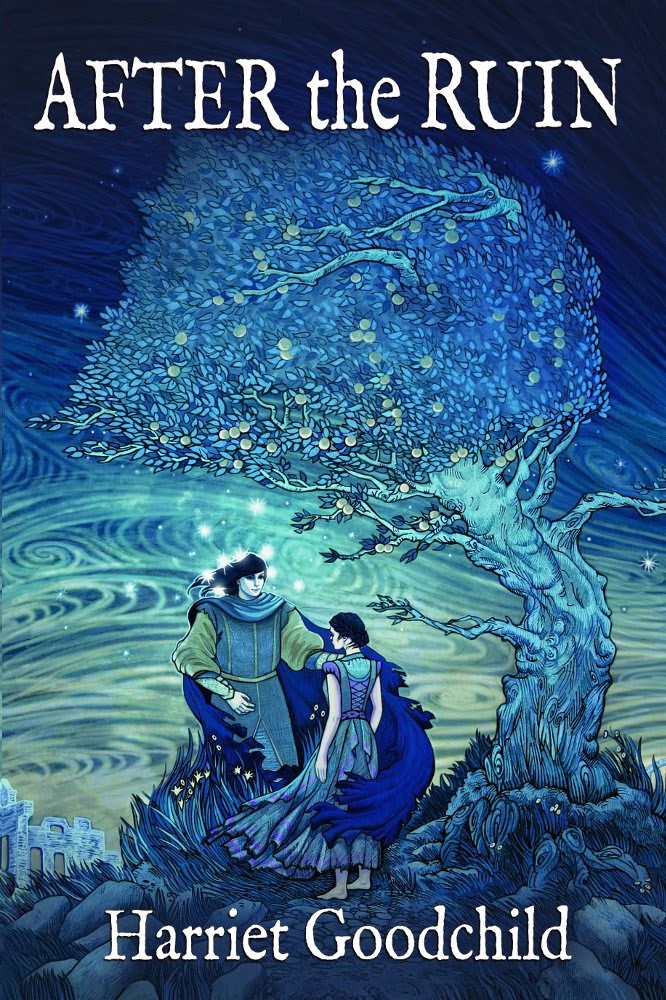 Harriet's Books
After the Ruin UK US Barnes & Noble Fishpond
Tales from the Later Lands (four stories) UK US
An End and a Beginning (two stories) UK US
Posted by Heroines of Fantasy at 2:30 AM

Beautiful and moving, Harriet. Thank you so much for this contribution! So sorry to see our party end. I'm already counting the days to next year's Fest...

One of my absolute favorite scenes in the entire book. Love!