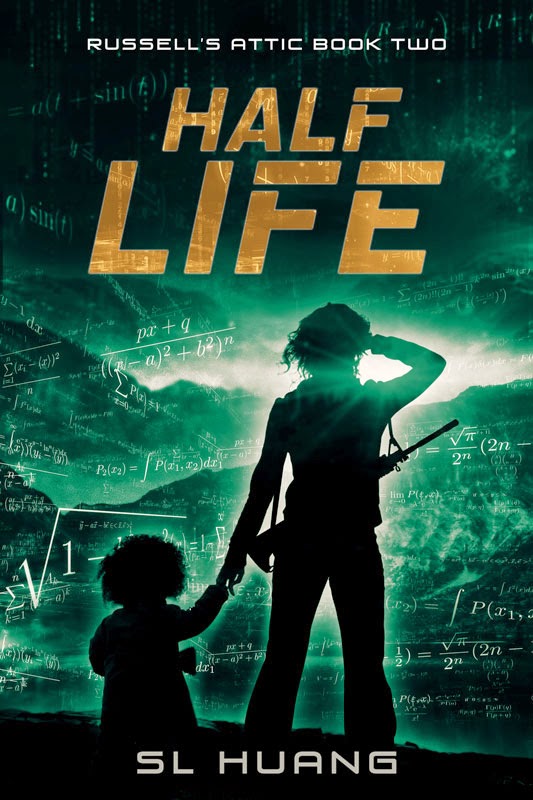 Cas Russell is back — and so is her deadly supermath.

Cas may be an antisocial mercenary who uses her instant calculating skills to mow down enemies, but she’s trying hard to build up a handful of morals. So when she’s hired by an anguished father to rescue his kid from an evil tech conglomerate, it seems like the perfect job to use for ethics practice.

Then she finds her client’s daughter . . . who is a robot.

The researchers who own the ’bot will stop at nothing to get it back, but the kid’s just real enough for Cas to want to protect her — even though she knows she’s risking everything for a collection of metal and wires. But when the case blows up in her face, it plunges Cas into the crossfire of a massive, decades-long corporate espionage war.

Cas knows logically that she isn’t saving a child. She’s stealing a piece of technology, one expensive and high-stakes enough that spiriting it away is going to get innocent people killed. But she has a distraught father on one hand and a robot programmed to act like a distraught daughter on the other, and she’s never been able to sit by when a kid is in trouble — even a fake one.

Screw morals and ethics. All Cas wants to do is save one little girl.

Last April, I finished my review of SL Huang’s first novel, Zero Sum Game, by saying The sequel can’t come a moment too soon. Since then, she’s been spotted saying interesting and thoughtful things all over the interwebs, and has published a fairy story with the Book Smugglers (it’s jolly good and in a completely different mode from the Russell's Attic stories: you'll find it here). But, I thought, tapping my toe, What about the sequel?

As these things go, she didn’t keep me waiting long. Half Life, Cas Russell’s next adventure, arrived just before the holidays and I’d read it well before Christmas Day. And it too is a cracker, every bit of a page-turner as Zero Sum Game. If you enjoyed that, you enjoy this. Cas, the anti-social anti-heroine with lightning reflexes and instant integration, who sees the world through a veil of maths, is on full form.

Like its predecessor, Half Life is a very fast-paced, hugely enjoyable, just-about-sci-fi thriller. The plot twists and turns like an enraged eel as Cas outwits, outfaces and outfires a host of avaricious companies and confronts a mad scientist in – well, where do you think a mad scientist would set up a lair? The main plot is that described in the blurb: Cas is hired by a desperate father to rescue his small daughter, who has been kidnapped by the corporation that used to employ his wife. But success reveals what he failed to mention: the child is a highly sophisticated robot.

The dilemma comes when Cas has to balance the interests of this ‘child’ over those of real, living people. Of course, this shouldn’t be a dilemma at all. That it is, and Cas’s emotional response to the thought of the robot becoming an experimental subject, tells us, I think, rather a lot about her own past, something glimpsed in brief flashback images about which she either has no conscious recall (highly likely) or isn’t saying (rather less likely). For me, this untold back story is the most interesting part of the book, probably because it isn’t developed or explained and thus leaves room for guesses. So far, Huang’s been dripping it in and I’m rather hoping the dose increases in later books. Anyway, though slightly frustrating, this dripfeed is an excellent ploy to keep a reader reading. Cas herself is so super-powered – an impossible girl – that I’m not really concerned about her. She may have set backs but she’ll make it through, no matter what her opponents throw, fire or launch at her.

The body count is lower than in Zero Sum Game. What’s that? you cry, recalling its wholesale destruction. Could it be Cas Russell has reformed? Oh no, no, NO! Cas hasn’t developed a conscience but she has made some friends, at least one of whom does have a conscience, and she’d like to keep them. But friendship comes with its own problems and, in the middle of her confrontations with double-crossing corporations, crazed scientists and anxious parents, one of her new-found friends is in trouble with the Mob. Who are now after her as well. Cas’s desire to keep his (and her) hide whole is complicated by her equally new-found restraint. There's a deal of black comedy in her not being able to leap straight to lethal violence as the solution to every problem. And, of course, she then has to solve the problems which arise from not killing people.

Huang is clearly having huge fun writing these books and, such is the confident assurance of her writing, a reader can easily go along with her into the grey areas outwith the bounds of everyday morality. Although the resolution of the Mob subplot didn’t quite gel for me, taken as a whole, the plotting of this book is a little tighter than that of Zero Sum Game. I didn't miss Rio: others might (if you're one of them, there's an intercalated story). There are lots of external references (yay for Doctor Who shout-outs!), familiar tropes are subverted and mainstream expectations mocked. It is, above all, excellent escapism. One of the great pleasures in life is a book that carries you away from daily cares. This is one such book. Read it. Enjoy it. And then join me in the queue waiting for the next instalment. Which, also, can't come a moment too soon.