Guest Post by Travis Heermann: The Emergence of a Heroine 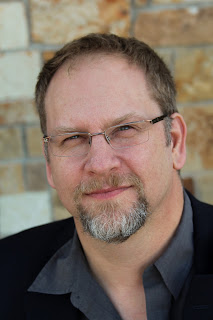 For July's guest post, please welcome freelance writer, novelist, award-winning screenwriter, editor, poker player, poet, biker, and roustabout Travis Heermann. Travis is a graduate of the Odyssey Writing Workshop and the author of Death Wind, The Ronin Trilogy,The Wild Boys, and Rogues of the Black Fury, plus short fiction pieces in anthologies and magazines such as Alembical, the Fiction River anthology series, Historical Lovecraft, and Cemetery Dance’s Shivers VII. As a freelance writer, he has produced a metric ton of role-playing game work both in print and online, including the Firefly Roleplaying Game, Legend of Five Rings, d20 System, and the MMORPG, EVE Online.

He enjoys cycling, martial arts, torturing young minds with otherworldly ideas, and zombies. He has three long-cherished dreams: a produced screenplay, a NYT best-seller, and a seat in the World Series of Poker.

I started writing the historical fantasy story that would become the Ronin Trilogy in about 1999, fueled by a passion for samurai films and anime.

Those early efforts focused on the development of the protagonist, the ronin Ken’ishi, and his story. I was in my late twenties, still clueless about a great many things, but striving to put together a story that would take the fiction world by typhoon.

At the heart of the Ronin Trilogy are two lovers, Ken’ishi and the noble samurai maiden Kazuko, torn apart as teenagers and both forever stuck in that awful, haunted realm of Coulda Been, fated to be close, but never touch, to have their love become the most dangerous kind of temptation.

As I look back at how the story came into being, the early development of Kazuko’s character was probably a case study in how to do it “wrong.”

I started off writing Kazuko as the Love Interest, simply the catalyst by which Ken’ishi would be tortured with longing. Unfair to her, and to female readers, but I did the best I could at the time. I hope she doesn’t come across to readers that way, but that was how she was conceived, labeled as such in my notes.

In Heart of the Ronin, Kazuko reveals glimmers of what my subconscious apparently wanted her to become, but her sole defining trait was beautiful. She was just a hot chick with a naginata (a Japanese halberd), fated to marry the wrong guy.

I’ve always been on board with women’s rights and equality, but like, I suspect, most well-meaning men, I spent a lot of time floundering in utter ignorance of the real challenges that women face daily, about the kind of characters they want to read about, or identify with, and with no real clue about the ways I was probably contributing to the problem. Duh, because I’m a dude, blind to most of the ways things are set up in my favor.

Since Five Star published Heart in 2008, a ridiculously recent date on the tapestry of history, there 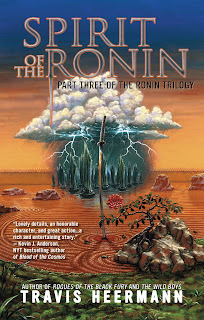 have been tremendous upheavals on the front of women’s rights in the U.S., steps forward and steps backward. I don’t want to correlate my books with the earthquakes of the women’s movement, but it’s impossible to extricate a piece of art from the milieu in which it was created. A critical literary analysis might prise the author’s psychology from the text and argue that Kazuko’s development mirrored his awareness of women’s issues.

In Book 2, Sword of the Ronin, Kazuko begins to step out of the shadow of her husband’s power, and the shadow of her sundered love for Ken’ishi. To do that she turns to martial arts, first as a crutch, then as a joy, then as a path to transformation, and by the end of the book, she emerges as a woman of strength and conviction, tortured but steadfast. I wrote most of this book a couple of years after Heart was released, but there were pieces of it that had been written a decade previously, perhaps containing remnants of my younger ignorance.

The first time I took my eight-year-old step-daughter, a beautiful little budding nerd and Harry Potter fanatic, into a comic store, it was driven home to me that practically nothing was suitable or interesting for her to read. In a store of hundreds, no, thousands of titles, there were maybe two or three that interested her. As a kid, I had had dozens of titles to choose from, filled with supermen and batmen and spider-men and x-men, even in the old days of drugstore and grocery store comics racks. Had she been alive then, all she would have had was Wonder Woman. Oh, wait, that’s still all she has, really. She adores the medium, but there is nothing for her. It pains an old geek’s heart. (And don’t get me started on trying to find her a Black Widow action figure.)

I was not thinking about this as I was writing Spirit of the Ronin. Nevertheless, all of the travails of the women’s movement, which I was seeing all around me, particularly through the lens of my staunchly feminist girlfriend, now wife, could not help but percolate through my creative process. When I reached the end of the first draft of Spirit of the Ronin, I could look at Kazuko from a critical viewpoint, look at her character arc as a whole, and see my own journey.
In Book 3, she evolves into something with far more depth and complexity than the Love Interest or The Wife. She becomes a bad-ass martial artist and leader in her own right, a true samurai heroine, consumed by loyalty, honor, and love. By the novel’s climax, she becomes something I had not envisioned in 1999, or even in 2008 when Heart was first released: a full-fledged tragic heroine of Shakespearean proportions. 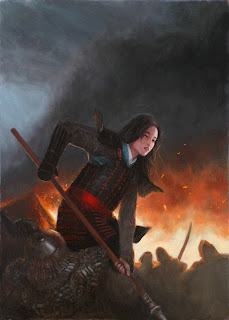 Kazuko’s journey from timid, foolish teenager to samurai heroine is why an illustration of her, not Ken’ishi, graces the cover of Book 3. By the end of the trilogy, she has claimed her rightful place with grace and authority. She does not overshadow Ken’ishi; they stand side-by-side. And isn’t that in part what the women’s movement is about?

I’ll leave it up readers to evaluate Kazuko’s character. But I will venture to say that she’s as real and vibrant in my mind as some of the greatest heroines of fantasy fiction. As I look back at the way the story developed, I’m struck by how much more complete she feels now. Isn’t that what character development is? Might there not be some development of my own in there as well?

My step-daughter is still too young to read the Ronin Trilogy (because it’s dark, gritty, and deals with some complex themes), but I don’t doubt that someday she will. I hope that when she does, she’ll find Kazuko worth reading.
Posted by Heroines of Fantasy at 12:00 AM