WEDNESDAY REVIEW: To Walk in the Way of Lions (Tails of the Upper Kingdom Book 2) 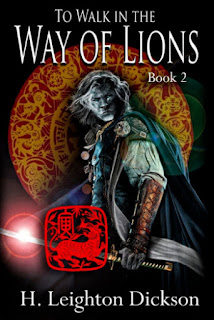 Blurb:
In the Survival of the Fittest, Not All Men are Created Equal. Some are Created Lions.

TO WALK IN THE WAY OF LIONS is the second in the powerful Original Series by H. Leighton Dickson and picks up where TO JOURNEY IN THE YEAR OF THE TIGER leaves off. This is a sweeping post-apocalyptic tale of genetically altered lions and tigers, wolves and dragons in a world that has evolved in the wake of the fall of human civilization. Half feline, half human, their culture blends those of Dynastic China, Ancient India and Feudal Japan where humans are legend and kingdoms have risen in their stead. Fans of Tolkien, GAME OF THRONES, REDWALL or Japanese anime will be entertained in these intelligent and beautifully written pages in a blend of science, fantasy and zoological speculation.

The conclusion to the sweeping epic that began in 'TO JOURNEY IN THE YEAR OF THE TIGER, the story picks up where Journey leaves off, in the harsh deserts of Khanisthan. The team is running under a very set of different dynamics than before, for not only will they be forced to confront enemies tracking from the North and a hostile force from the Palace following from the South, but they must face their own demons that are plaguing them from within. It's man against man, cat against cat, Seer against Alchemist, knowledge versus ‘the Way of Things’ – a Sci-Fi 'Pride and Prejudice and Lions', like you’ve never read it before.

From the ruthless wilds of Khanisthan to the wind-swept shores of the Mediterranean Sea, the beauty and savagery of the Upper Kingdom unfolds like a living thing before them as they travel and Kirin will find out what it means to follow the code of Bushido to the gates of death and beyond…

This is the journey of six individuals as they travel beyond the edges of the known Empire, into lands uncharted and wild. Theirs is a journey of magic and mystery, science and swords, romance and intrigue. It is a journey of different perspectives and unexpected kharma and love found in surprising places. It is a journey that takes place five thousand years or so in the future, naturally in the Year of the Tiger.

Often, early in an author’s career, the most intriguing of plot lines take a sharp right turn into cliché land, but not so with this novel. Dickinson perfectly handled the writer's task of giving me what I want, but still surprising me. She accomplished this by crafting an Epic Fantasy that is character/relationship driven. In fact, the driving issue of the tWitWoL, solving the mystery of the Ancestors, fell to secondary importance because I became consumed with seeing how the characters resolved their personal and interpersonal conflicts.

All of the main characters have romantic interests and their relationships are almost all directly part of the plot, except perhaps Kirin’s, which is great for me because romance as a sub-plot generally has me skimming to get back to the plot. Though the Captain of the Royal Guard’s love—long-distance and seemingly hopeless even though she apparently she loves him back—of the Empress may not have been strongly tied into the Ancestor plot, it was crucial to his character and his decision making and the ramifications of it are emotionally staggering.  Also the relationships aren’t predictable, for instance, there’s two mysterious characters who have somewhat complementary attributes. A less skilled author would have made those two a couple because they “fit”, which works in the real world, but is boring in a story. Dickinson is never boring.

Like the first novel, Dickinson left leeway for further novels in this world, but unlike in the first book there is an excellent, well-thought-out, resolution to the "story" of each character and the plot as a whole. They aren't all "happy" conclusions by any means, but for me that makes a better read because some tragedy makes the happier endings all the more sweet, and without pain few people, or characters, grow as they do in this novel.


To those who found even moderate enjoyment in the first novel and are on the fence as to whether they want to invest their time in this conclusion, I say you should definitely go for it. With the caveat that you must read Book One to get the full experience, I give To Walk in the Way of Lions (Tails from the Upper Kingdom) the highest recommendation.