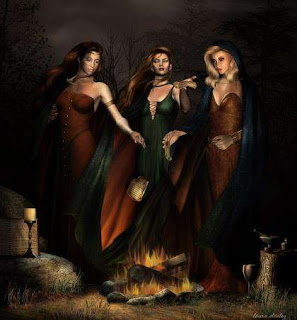 2015 has been a year of good-byes, for me and for many of my friends and colleagues.

Some of these good-byes have come out of important decisions of our own; others have been thrust upon us, making us unwilling partners in the changing patterns of our lives.

Whatever circumstances, good-byes serve a purpose. They make us stronger, bring us closer to our true friends, and more often than not, open up opportunities that would not have appeared were it not for that first, brave act of letting go.

This month, after much reflection and conversation, Heroines of Fantasy is getting ready to say good-bye, as well. Starting January 2016, we will no longer be offering our regular Monday posts or Wednesday book reviews. Terri-Lynne DeFino and I, who have coordinated this operation for about two years now, each decided independently that we can't dedicate the same time anymore to the blog. The rest of our crew, unfortunately, is similarly bogged down by other commitments. There isn't anyone else at the moment who can take up the reins.

I'm not sure whether this marks a true end to Heroines of Fantasy, or whether it will be a sabbatical of sorts that will allow us to rest, regroup, and perhaps come back together again six or twelve months down the line. In any case, I wanted to let all our readers know how deeply we appreciate your support and participation. All of us, in our own way, are sad to see this project end.

Back when Kim Vandervort, Terri-Lynne, and I started Heroines of Fantasy in 2011, there were very few public venues where we could engage in the kind of conversations we've had here, challenging the status quo and celebrating stories that give central roles to women from all walks of life. I've learned so much, and found so much inspiration, from our readers, reviewers, contributors, and guest authors. I will miss this venue very much.

What will we do now, you ask?

Well, for my part, I'm looking forward to the release of several works in 2016. We are preparing new editions of Eolyn and High Maga, the latter to be marketed under a new title, The Sword of Shadows. This is a major undertaking. Not only am I re-editing both books, but what used to be packaged as separate companion novels will now be put forward as a single cohesive series, called The Silver Web trilogy. In addition to these two novels, I plan to put out a paranormal novella, The Hunting Grounds, in autumn. This time next year, I hope to be counting the days to the release of third novel of The Silver Web, entitled Daughter of Aithne.

I very much want to keep in touch with all of you, and I hope you will visit and follow me at my website, krgastreich.com or on Facebook or Twitter. Any plans to reboot Heroines of Fantasy will be announced there.

I've invited the rest of the crew to share their plans in the comments below. I know many of them have exciting news and dreams for 2016, so I hope they'll stop by and tell you more.

I'd also like to hear your news and dreams. What are you saying good-bye to this year? What do you look forward to in 2016?

Because I always like to go out dancing, I'll leave you with this New Year's Eve song by Ana Torroja. It's in Spanish, so my apologies for those who can't understand the lyrics. But it's basically about the topic of the day: Saying good-bye and starting anew. I find it very serendipitous that in this video, the song is interpreted by three women. I can't help but imagine them as Kim, Terri, and me, the ones who started it all, way back when. I suspect that's Eric T. Reynolds back there on the bass, and Mark Nelson is almost certainly playing one of the guitars.

My best wishes to everyone for a beautiful holiday season and a prosperous New Year.

-Posted by Karin Rita Gastreich
Posted by Heroines of Fantasy at 6:00 AM

This makes me sad in ways I did not expect it to. For me, the good-byes started back in that February our beloved leader dubs S-day.Taking over Hadley Rille Books in that time of upheaval led me into writing outside my genre of choice, fantasy, and into writing romance. Though my fantasy all have romantic elements, writing contemporary romance took me a step out of the writer I had been. It's a strange thing, having a foot in each world. I kept it up for a while, and then last June, the unthinkable happened, a personal tragedy I won't revisit here. It knocked the wind out of my sails. I had to scale back, and that meant cutting some of the things I might love.
I took a hiatus from Heroines of Fantasy. Completely. I disappeared from these pages, and I honestly don't know why that was so. By mutual consent, that is now to be a permanent thing for all of us. I'm sad to see it go, but I'm ready.
Publishing my works of fantasy, with a press I love and respect and continue to work with behind the scenes, has been a dream come true. I didn't make friends, I made a family. One I cherish. Heroines of Fantasy has been closely linked to HRB since the inception of the blog. Most of our writers and reviewers are authors with the press. My family. I'm saying goodbye to HOF, but not my family. Consider me the long-lost cousin you simply can't get rid of.
My deepest love and appreciation to all--especially to Kim and Karin, who have been here all along. And Mark, our first hero of heroines, our resident poet.
I love you all.

I first got to know Terri-Lynne through this site. I was writing a fantasy series for WATTPAD and she invited me to guest blog. I'm also sad to see HoF go. It was a good place to visit, and introduced me to an amazing woman.

Back at you, Sarah. Mwah!

It's been a wonderful thing to have been part of this. I've written about books I'd otherwise not have read, and read posts that transported me to other places - sometimes other worlds - for a while. Thank you, and best wishes for the future to you all.