Winter Reading: Under the Skin by Michel Faber 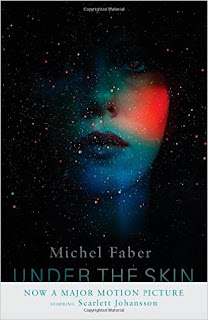 This isn’t one of my regular new book reviews. It’s nearly the end of the year, the northern nights are long and dark, and I’ve been revisiting some of my favourite books. Many of these I first read a long time back. One book, however, that I only met for the first time late last year now sits firmly amid my favourites. It’s Michel Faber’s Under the Skin*.

I nearly didn’t read it. It was published way back in 2000, but I avoided it for years because the first of Faber’s books I’d encountered was The Crimson Petal and the White (2002) and that I hated (I’ve not changed my mind about it, either). But for whatever reason I did eventually pick up Under the Skin, and within a few pages I was transfixed.

Isserley, slight, scarred, in constant pain and with perfect, eye-drawing breasts, drives up and down the northern stretches of the A9 picking up hitch-hikers. Only men. Only men travelling alone. After she’s picked them up, whilst their eyes linger – or try not to linger – on those breasts, she talks to them, finds out where they’re from and who will miss them, decides if they measure up to her standards and fit her needs. And then, well, yes, those warnings you’ve been given about the dangers of hitch-hiking and accepting lifts from strangers are all warranted. But not, in this case, for the obvious reasons.

Summarised baldly the plot would sound fairly banal, an equal mix of sci-fi horror and urban myth. Plot, of course, is not usually the most important aspect of a book, certainly not of a book one reads and rereads. This book gets everything right, characters, setting, echoes and resonances. I don’t want to make it sound over-burdened with cultural baggage – it’s first and foremost a taut and gripping story – but it could be read through the lens of gender politics, or societal divisions between haves and have-nots, as a satire on western fears around immigration or battery farming.

It is also quite beautifully written. Every sentence, every word, counts. There’s no exposition, no clumsy transfer of information from page to reader. It’s Isserley’s world and she inhabits it utterly. Everything comes from that. Everything has context. It’s a story I can believe in completely, even fourth time around. Faber positions the reader more or less under her skin to feel her hatred of the Elite who used her and betrayed her, of the surgeons who mutilated her, of herself for her complicity in that mutilation. And Isserley herself is seen, through the eyes of the men she drops off by the roadside or takes back with her to Ablach Farm. The world-building is fantastic. It’s a double world building, in fact, conjuring the Scottish landscapes, roads and weather as finely and precisely as anything I’ve read. All the details are right, from the cheery banality of the overhead warning signs to the smell of whelks on the shore. And because all those details are right I can, of course, trust all the other details too, the ones not rooted in any reality outside the book.

In life, of course, no one can ever know what lies under someone else’s skin. In a book the reader sees all. As the story unfolds in perfect pace, I learn who Isserley is, what happens at the farm, why she finds the seascapes of the Moray Firth so alien and lovely. I learn of her escape from a miserable life on the Estates back home and the dreadful price she paid for it. I see too that the men she picks up all have their pasts and stories. Some are lonely, some are hopeful, some are well-meaning, some lecherous and dangerous. Isserley must question each, listening, guessing, hoping desperately all the while that she doesn’t make a mistake, but over and again I’m aware of the gulf between reality and perception, and how easily and neatly tragedy slips in to fill that gulf. Only connect, but Isserley has no wish to connect. She has a job to do, only she can do it, and she prides herself on doing it well.

For her past has left its scars upon her psyche as well as her body: she’s a tight, prickly soul, wary of kindness, estranged from the workers at the farm as much as from the hitchers on the road. At the same time, she’s filled with wonder at the strangeness and the beauty of her new home. Most wonderfully of all, I can see, as the story unfolds through Isserley’s experiences and encounters, how the landscapes through which she drives day after day seep under her skin, changing her slowly from one thing to another until, finally, she makes a connection. Metaphysics, perhaps, but still the perfect end to the story.

* Under the Skin was made into a film starring Scarlett Johansson. It’s often said that the best film adaptations are those which don’t attempt a literal rendering. This one certainly doesn’t, being a very free interpretation of the novel. As it was, having read the novel first, I tried to map it onto the film and found myself perhaps more baffled than a completely naïve viewer. In retrospect, that’s the wrong way to view it as, although it retains something of the central conceit, the film works it in another mood and direction entirely. It's a rather beautiful, surreal couple of hours but not much like the source material. The book is, I think, also very beautiful but it’s not at all surreal and not really that strange. It’s concrete and grounded in character and place in a way the film is not.