Little Red Riding Hood is my favorite fairy tale. I even have her tattooed onto my shin. I am not a big fan of the Charles Perrault version, wherein pretty little girls are admonished to follow the rules or else. I'm a fan of the older stories. Little Red is always a cautionary tale, but while Perrault wants well-bred girls to beware of wolves, listen to mom and dad, and never stray from the path, the first stories were about taking the wisdom of the grandmothers, of saving oneself, and of sexual awakening. 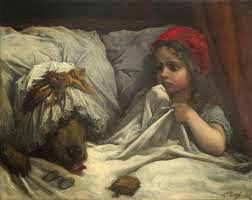 Because it's my favorite fairy tale, I recently watched a movie I've been meaning to see since it released way back in 2005--Hoodwinked. It got the gist of the old tales while modernizing the themes. The wolf was not a blatant sexual male. In fact, the wolf had nothing whatsoever to do with Red's virtue. Gaining grandmother's wisdom, however, was a huge theme, and--in my opinion--the best and most enduring piece of the Little Red Riding Hood tale.


I will admit, I'm not a fan of the animation for the film, but the script was killer. Funny for adults as wekk as for kids. Great cast. (Anything with Patrick Warburton in it is sure to please. Glenn Close, Anne Hathaway, Andy Dick, etc.) The messages were clear without being preachy. Red gets to be who she is meant to be from the oldest tales. All-around enjoyable. But that's not why I'm writing this post.

The weaving was flawless. Spot. On. Flawless. For any readers who love the intricacy of so many threads being woven together to form a whole tapestry, or for writers who want to see the mechanics of such a thing at work, Hoodwinked is a must-see. Without giving anything away, the story starts out at a scene near the end of the story--Little Red walking into Grandma's house to find Wolf in the bed. Wolf pounces, Red fights back, tied-up Grandma bursts out of the closet, and the Woodsman breaks through the window with his ax. The whole scene is broken up by the police who hold all of them for questioning--and here is where the weaving truly begins.

Each of the characters gets to give their perspective of events. Into each and every tale, the others' threads are woven--only you don't know it until another character's story gets told. Little by little, you see bits and pieces, and how it got woven in from the very first scene. A random character at the side of the road in Little Red's story is an integral part of the Woodsman's tale. And so on. It's brilliant. And it gives a depth that made Hoodwinked a great film, not just a cute kiddie movie.

If you get a chance to watch it, do. Enjoy it! But then watch it again to really see all those threads, how they got woven, and remember it next time you're writing, or reading. It will give you a whole new perspective.

~Terri-Lynne DeFino
Posted by Heroines of Fantasy at 11:02 AM

One of my favorite movies I've watched with the kids, for all the reasons you mentioned, plus I belly laughed throughout the whole thing. Great post :)

Gonna see if it's in On Demand on cable. Thanks!

That sounds great - I must check it out. My favourite Red Riding Hood interpretation definitely has to be Company of Wolves...

This movie looks like a lot of fun! I missed it somehow; I'll have to check it out.

Renee--it's old enough that it's probably available in lots of places. Probably online! Try Hulu if OnDemand doesn't have it.

When I had to read Pope Joan for book club, I had read the book years ago and didn't much like it, so I ended up watching the movie the day before our meeting. On Hulu.

Louise--GRUESOME!!! Wow. Missed this one.

Sounds like fun. Can't believe I missed it when it came out.