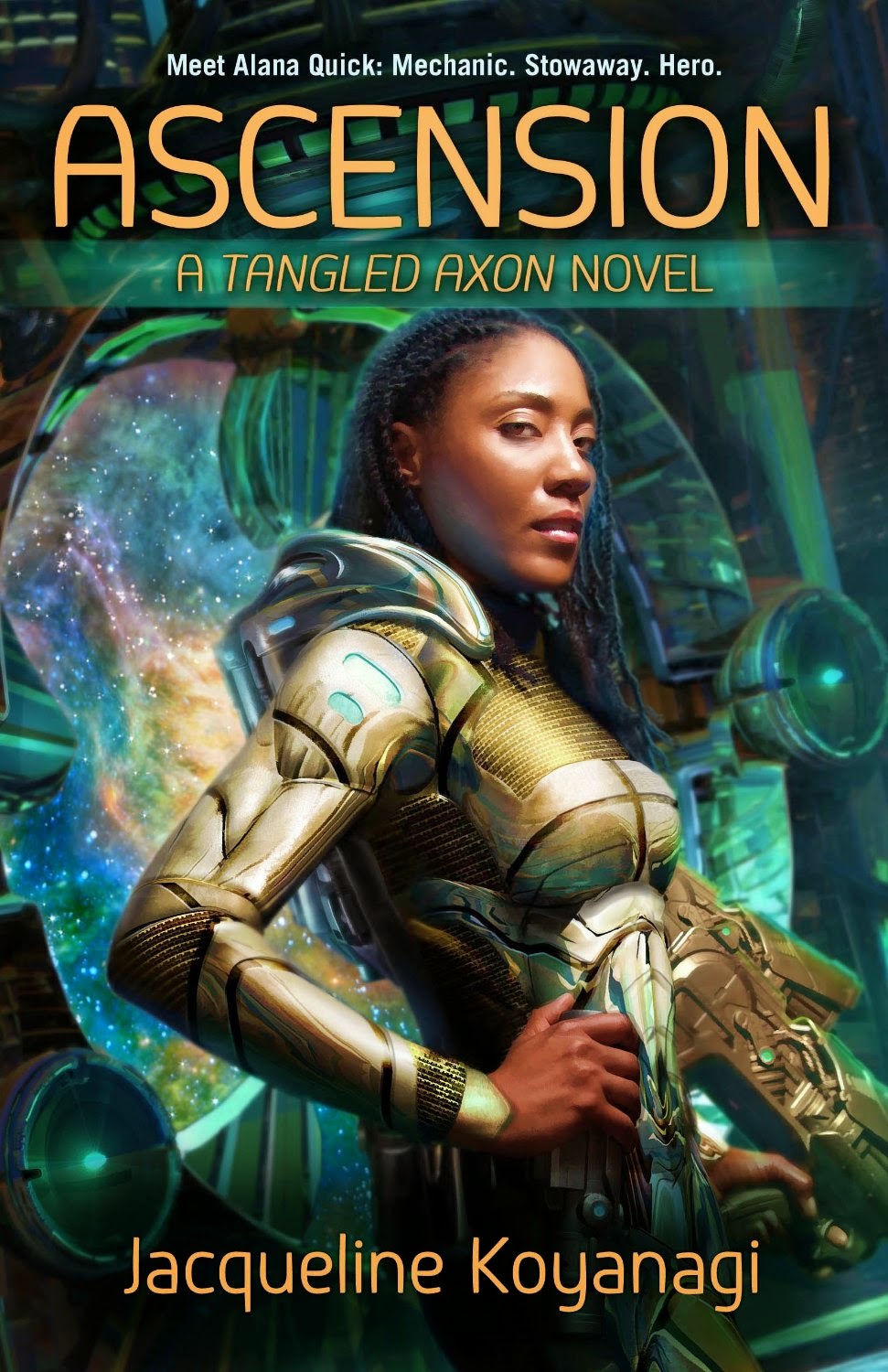 Happy Holidays to all you Heroines of Fantasy readers! Hope you are staying warm and dry and making merry in the ways you like best. This time around I’m reviewing Ascension, a debut novel by Jacqueline Koyanagi. This was one of the random books that showed up in my swag bag from World Fantasy Convention, but it made the “schlep home on airplane” cut because it looked like just the kind of character-based, space opera sci-fi I like best. Plus its protagonist was a working-class, queer woman of color with chronic illness issues, which sounded intriguing to me as I am heavily in favor of reading stories from traditionally underrepresented points of view.

Ascension is told from the point of view of Alana Quick, a “sky surgeon” (spaceship mechanic) with a chronic illness who struggles to make a living in a world which is slowly being gentrified by Transliminal, a large alien-run corporation with a whole different (and cheaper) kind of technology. Gearhead Alana has a passion for ships and space and has always dreamed of getting off planet as a ship’s engineer. The novel begins as she finally gets her chance to do just that by stowing away on the Tangled Axon, an old-fashioned human-built ship with the kind of motley crew that makes for good space opera: Ovie, a big strong-but-silent type ship’s engineer who is also sometimes a wolf; Slip, a cynical doctor with a heart of gold; Marre, a mysterious pilot with parts of her body that randomly disappear, layer by layer; and Tev, a sexy, tough-broad captain who secretly loves to garden. They’re a tight-knit family of rogues and outcasts, and Alana wants nothing more than to be a part of the crew and to get her hands in the Tangled Axon’s engines (and possibly in her captain’s pants).

The catch? They don’t want Alana, they want her sister, Nova. Alana gets the captain and crew to provisionally accept her presence as a way to get to her sister, but once they do get to Nova, things start to get weird and the stakes get higher. I won’t go into the plot much further here, since plot intricacies are half the fun of space opera to begin with, but suffice to say that they are, in fact, generally fun, and that, just as you might suspect, Alana eventually gets accepted into the family (and the captain’s pants).

There was a lot I really enjoyed about this book. Koyanagi’s prose is solidly readable and the pacing was good, so I kept wanting to know what happened next. I think the book was at its best when delving into the characters and their motivations. I really appreciated the vibrant, diverse, cast of mostly women characters, and the way that “non-traditional” (e.g. queer or polyamorous) relationships were treated as normal and unremarkable. I liked Alana as a protagonist, and liked the way she (and the author) ruminated on class, passion, illness, personal/familial relationships, and grieving. I especially appreciated Koyanagi’s deft and nuanced portrayal of a heroine who struggles with chronic pain and disabilities yet still manages to be convincingly heroic when needed. I enjoyed the buildup (and payoff) of the romance between Alana and Captain Tev, and I appreciated the depth with which the sibling relationship between Alana and Nova was explored. I also enjoyed the setting and the world-building that Koyanagi did, although I found it a bit too thin in places. (Which is usually a sign that I’m intrigued enough to want to know more about something/somewhere, so that isn’t really a big negative thing.) This book appears to be the first in a possible series, though, so perhaps we'll get some more world-building with future books.

There were some things that I felt like the author was not as successful with as she was with her character building, although nothing was a flat-out failure or irritant. For example, though I was intrigued that the author tried to create a world in which there was a blend of spirituality (magic) and technology, I didn’t necessarily feel like either the magic or the tech were explained or applied consistently enough that they were fully believable. And though there were some good plot twists and turns and the action scenes were good, overall the “we have to go here and get this person so we can get this other person to do what we want” plot felt at best like a fairly standard “macguffin” plot (aka “collect all the shiny things to win”) and at worst somewhat forced. More than once I found myself asking “now why would so-and-so agree to that?” or “why do they really need that?” or “why did they have to go there?” I don’t mind hand-waving around technology or world-building when it’s not intrinsic to the plot (that’s why I like space opera better than hard science fiction) but it felt like there were times when a little more explanation of why or what or how could have helped ground this world and make it more memorable.

In summary: I liked this book, and I'd happily read others with these characters and this world. You’ll like this book if you like ensemble-cast space opera featuring strong women characters, romantic lesbian relationships, and non-traditional protagonists.
Posted by Heroines of Fantasy at 5:31 PM