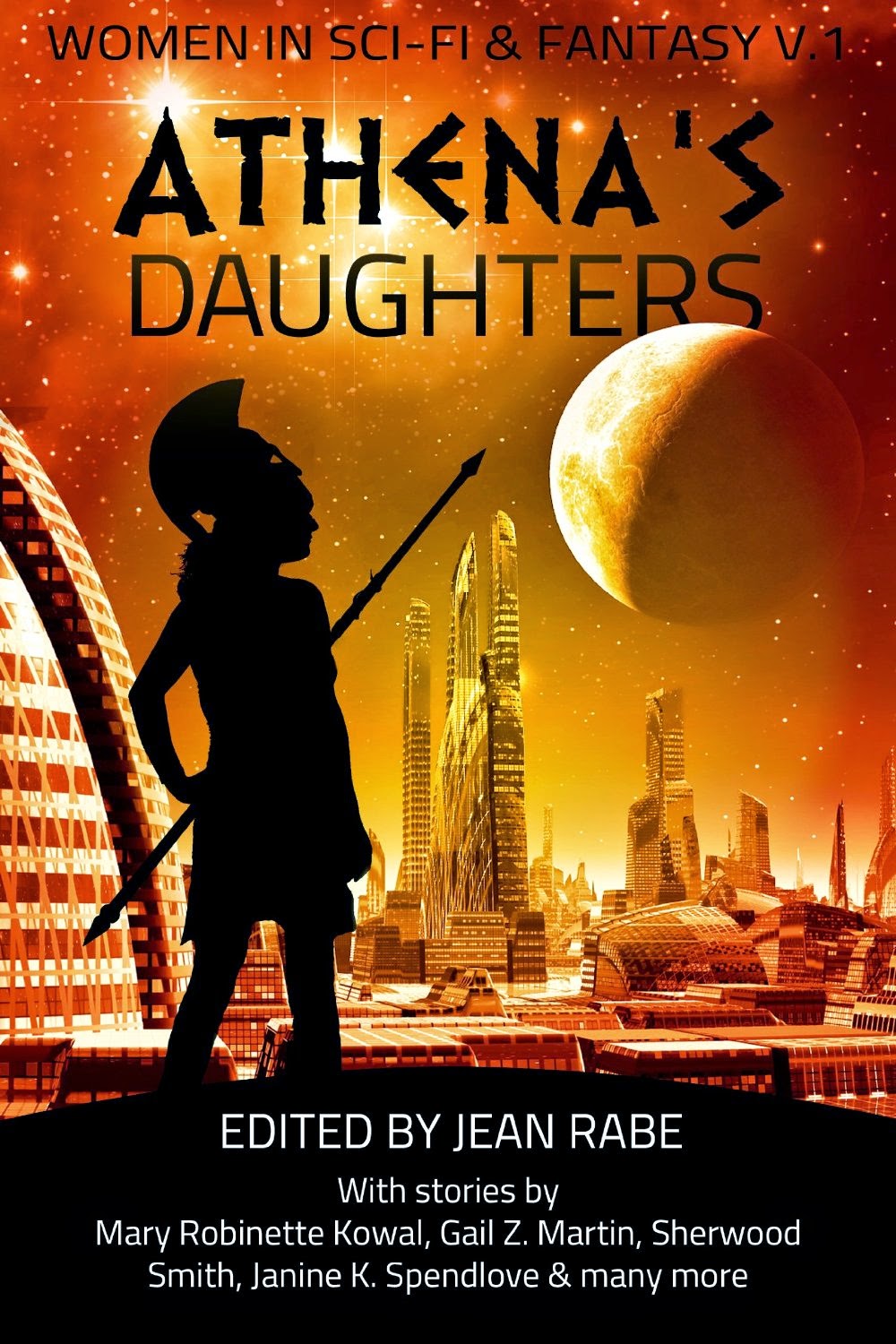 Hello fellow HoF readers! Julia here again, this time with a review of Athena’s Daughters, a short story collection edited by Jean Rabe.  This made a big splash on Kickstarter last year amongst those of us who like strong women in our spec fic, and it looked interesting enough for me to back it. I’ve had the book on my Kindle waiting for me for a few months and I finally got around to reading it this month.

I love the idea for this collection: a broad collection of sci-fi and fantasy stories about women, written and edited and designed by women. There were a wide variety of stories about a wide variety of women, which certainly kept things interesting. Stories ranged from military sci-fi to steampunk, from time travel to epic fantasy, from urban fantasy to fairy tales, from noir to ghost stories, and more. Not all the women were your typical “strong women” characters (aka action hero with a weapon), but all of them were effective protagonists in their own ways, and I appreciated that there was a lot more diversity represented than one typically finds in genre fiction. I really enjoyed the illustrations by Autumn Frederickson and Betsy Waddell for each story too.

Of the 22 stories in the collection, the ones that I appreciated the most were “White Dawn” by Nisi Shawl, in which animals previously kept as pets who have now been modified to talk go through moral debates over who is a person and what counts as intelligence; “Millie” by Janine K. Spendlove, which nicely combined time travel, women who love to fly and the early days of aviation; “Not Broken, Just Bent” by Tera Fulbright, about a reluctant military recruiter in a time of human-alien war; “Oh Sisters Let’s Go Down to the River” by Conley Lyons, an old timey Appalachian ghost tale with some truly spooky images of well-cleaning that will always stay with me; “Visage”, a fun story by Jean Rabe which mixes an entitled cosmetics company heiress with Amazonian jungle horror; “Lunar Camp”, a charming little story in which a girl who loves plants comes to appreciate those who love rocks when she is unwillingly sent to summer camp on the moon and adventure ensues; and “Huntress Sinister” by Diana Peterfreund, a great, emotional, character-driven story about evil monster unicorns and the women who are trained to hunt them.

If I had any criticism of this collection, it might be that there were too many steampunk/Victorian-era stories (though of course if you love the steampunk stuff you might feel like there weren’t enough). In addition, it felt like there were a lot of stories that were created as add-ons or side adventures for already created worlds or characters. Sometimes this was ok, but sometimes it was frustrating because the stories themselves didn’t feel resolved, and they felt like they had just been created as marketing tools to get a reader to buy the main book, rather than as complete stories in and of themselves for a reader to enjoy.

Overall, if you like speculative fiction about strong, interesting women and are looking for a good sampler of different kinds of speculative fiction, you will like Athena’s Daughters. I understand there is a second volume coming out soon, as well as a companion volume called Apollo’s Daughters which will be fiction starring women characters written by men. Silence in the Library seems to have a good thing going with its successful use of the Kickstarter platform to put out new anthologies, and I am intrigued to see where they go with it.
Posted by Heroines of Fantasy at 7:00 AM

hi! Thank you so much for your nice review - we SO appreciate it! It was a really special project to be a part of. (And thanks in particular for calling out my Lunar Camp story!!) We also totally get your criticism of the antho. We actually recently put out a 2nd volume, Athena's Daughters 2, wherein we did open submissions. We think we got the balance of stories just right and we're really proud of the collection. If you'd be interested in reviewing it, we'd be happy to send you a free e-copy. Please let me know if you would like one and where to send the file! You can contact us at sitlsubmissions at gmail dot com - thank you!!

Hi Maggie! Thank you. We were happy to feature this anthology on the site, since it fits so well with our own mission. I'll pass the word along about volume two to our review crew; I'm sure Julia Dvorin, who wrote this review, would be interested in having a look at the second volume. If not, hopefully someone else will pick it up. Have a great week!

Wonderful! Please do let us know! Than you again!