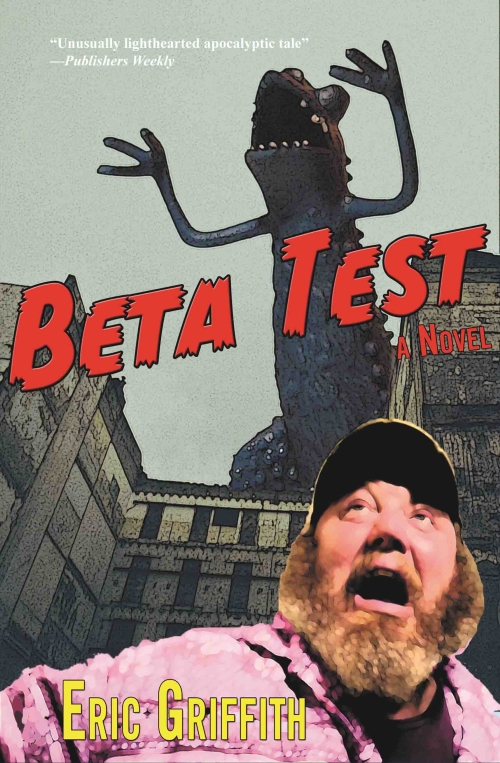 Eric here! Time for a Fright Fest chase scene from my novel, BETA TEST. This takes place on the night the extra-dimensional aliens who use Earth as a playground return, after being kicked out of their favorite game. They're not happy, and they're tearing the world to shreds. And they really want to kill our hero Sam Terra, his girl-friend-in-a-man's body Molly Maddox, and Sam's friend Melvin Dutta, who's just kind of an ass. The trio has stolen an ambulance to drive across San Francisco in the carnage, when a visitor materializes on the gurney in back.

It resembled a tub of rancid butter mixed with cat-hair in a shapeless mass on the ambulance gurney. It smelled worse. It shifted and grew, doubling in size each few seconds. Once it was the length of the gurney it took on a shape, obvious humanoid, with two legs, two arms, a head, an obese torso.

The protoplasmic goo congealed. Inside its translucent innards formed bones, and within the rib-cage came a heart, beating, and from that a reddish bloom spread throughout the chest cavity, pumped to the extremities, until it was obscured by reddish-blue musculature, wrapping the bones like hungry snakes. Finally, the body of a skinless, fat little dwarf lay on the gurney.

The dwarf finally formed a layer of skin, but it was like nothing on any normal mammal of Earth, just a pasty pinkish-grey that appeared ready to slough off at a touch, almost as gelatinous as the creature's original appearance. Its face was more pig than human, a wide upturned nose under deep set eyes and above two thick, blunt tusks. It appeared to be asleep.

That's when it opened its eyes. It squealed like a sow, clawing at Molly with hands that had hoof-like nails.

"Hurry up, Dutta!" Molly tried to help Melvin with the lower set of straps, but Sam swerved out of the way of a car in the middle in the road. At the same time, the alien-pig bucked and kicked, making Melvin drop the strap. Molly dove for it, avoiding a kick that connected with Melvin's forehead.

"So not cool!" Melvin bawled.

Molly got the second strap in place, but the thing was going to get loose, that much was obvious, no matter how tight it was locked down. Molly looked for other restraints, grabbed a towel and used it like a rope to tie its closest appendage to the side rail. He threw a roll of white adhesive tape at Melvin and said, "Start strapping!"

The squealing creature did something unexpected. It projectile vomited on the back door of the ambulance. The smell hit Sam in the front like a stench tsunami. "Jesus, it smells like moldy shit souffle back there." "Gah...come look," Melvin said between retching.

The ambulance door on the right fell off.

The alien-pig's sick ate the plastic and steel door like hot water drilling through cotton candy. The door's hinges were no longer there, melted to slag. The left door was slowly dissolving the same way, a hole by the handle growing, irising open. Alien-pig looked as surprised as everyone else, then smiled around its tusks, and took a deep breath as if it planned to yak up some more corrosive bile.

"You fucker," Molly yanked the small portable oxygen tank from the head of the gurney and slammed the flat end into alien-pig's snout with both hands. It oinked once and fell unconscious.

Molly did. So did Sam out of the passenger side mirror.

An army of creatures was behind them, an assemblage that would have made the love-child of Tom Savini and Hieronymus Bosch blanch in fear. Brown hair and green gelatin and white skin now mixed with flames and horns and rocks to cover the skin (if it was skin) of their pursuers, an mob of monsters that made up for what it lacked in pitchforks and torches with a mad, pulsing enthusiasm for destruction. Every car that didn't plow into the oncoming creatures was overturned just for being in the way. Pedestrians foolish enough to be on the street were tossed into shop windows, at best. There were worse ways to go.

The creatures ran to catch up. The ambulance was their prey.

Molly said, "Faster, Sam! Faster! Or we're toast." Sam, going the wrong way on 10th, slid through the intersection on Howard Street, recognized a church/mosque/temple thing on the right, knew they were close to Market, and yelled, "Turn for Fell is coming up!"

"Okay. Got it." Molly jammed the O2 canister into the crook of alien-pig's arm and strapped it on with more tape. To Melvin: "Get that other door open."

Melvin looked at the still-dissolving door with disdain, then at Molly, then outside at the horrors hoofing toward them, a genuine pack of demons.

Careening between oncoming traffic, Sam pulled the gun from his pocket without hesitation and tossed it over his right shoulder. Molly caught the gun and pointed it at Melvin.

"Alright, alright you crazy bitch. . ." Melvin kicked at the door and after a couple of hits it flew open. At the same time, a dragonfly-esque thing the size of a jumbo hoagie swooped down and landed on the door, but it screamed in agony when its six legs touched alien-pig's acidic spew. It flew off whining. Just after, the door officially came off its corroded hinges. It took out a rock-and-mud-covered beast the size of Schwarzenegger in his steroidal heyday, splattering sludge across the other monsters.

"Get ready to release that brake when I tell you," Molly told

Melvin, indicating the rear wheel of the gurney with the gun barrel.

Something clutched Melvin's leg. A fast moving critter with casters for feet and a face like a bag of smashed assholes had caught up to them. Melvin kicked at it, making a strangled noise of panic, until it dislodged.

"Fuck," Sam said. "There's more!" The creatures poured in from either side of Market Street, a white-water river of malevolence. To the right, another Martian tripod turned their direction, ripping down the electrical cables strung over the road for the famed streetcars. Molly undid the heavy straps on the big oxygen tank stored near the side door and dropped it directly on alien-pig, the head end facing the front of the ambulance. It didn't wake the creature, so Molly wrapped the tank, creature and gurney twice with tape. He then tapped the unconscious monster not-very-gently on the forehead with the butt of the Ladysmith.

Alien-pig snorted, coming awake in an instant. Molly nodded at Melvin. He kicked the wheel release and jumped out of the way. As the gurney began to roll out, Molly used the small fire hatchet stored on the wall and knocked the head-end off the tank.

The force of expelled oxygen rocked Molly backwards. The gurney shot out of the rig with jet-assisted take-off. The wheels automatically extended to the ground to keep the patient at the right height for caregivers. In this case, an army of mutated horrors were all the care alien-pig would get.

Molly straightened, leaned against the turn, held the wall with one hand and aimed down the other. He—she—said nothing, just squeezed the trigger gently. The gun made a pop. It was deafening in the almost-enclosed space.

The big O2 tank erupted and the smaller one went with it. The explosions weren't much in the grand scheme of get-away diversions, but it never-the-less curtailed the immediate pursuit when alien-pig's remains splattered across the entire throng. Acidic innards burned the bellowing monsters, napalm-style.

"Never doubted you," Melvin said, not sounding happy about it.

Molly came up front and sat heavily in the passenger seat. "Okay, now we gotta get about twenty blocks."

"And then we're safe from them?"

PUBLISHERS WEEKLY: "An unusually lighthearted apocalyptic tale." Sam Terra is having a bad week. He lost Molly, the woman he secretly loves, when she vanished before his eyes at the exact same time that ten percent of the inhabitants of Earth disappeared. Naturally upset, Sam follows clues about the global vanishing with questionable help from his friends including a misanthropic co-worker and a childhood pal. When Molly reappears in the body of a man during a night of monster-laden devastation, Sam finally learns the truth. Not just about her, but about the planet Earth and the entire cosmos surrounding it. What we consider mundane reality, others consider a game . . . and not a very good one. The whole thing is about to be shut down.

Amazon
Barnes and Noble
Powell's
GoodReads
Posted by Heroines of Fantasy at 4:00 AM

Gripping excerpt, Eric, and fun too! Thanks for playing. :)

Guess it's just me, but I felt a bit sorry for Alien-pig. And I loved the little guy on castors!

Yes - very Hieronymous Bosch indeed!!Thanks for sharing, Eric - and sorry I didn't catch up before now!