One of the darker scenes from High Maga, "The Summoning" relates the first attempt by Rishona, San'iloman of the Syrnte, to summon the Naether Demons out of the Underworld.

Warning: A handful of my readers have found this scene too much to stomach. It is a graphic account not only of the evil that can be drawn up from the Underworld, but of the evil that humans can commit against each other. You've been warned. Proceed at your own risk.

Donatya led Merina toward the circle. The servant hummed an absent tune, white owl cradled between her swollen breasts, gaze unfocussed. She walked on unsteady feet, supported at the elbow by Donatya’s gentle touch as she knelt before Rishona.

The San’iloman took the owl in a flutter of wings, calmed it, stroked it, kissed the miniature head, and pressed its shivering body over her heart. Accepting the obsidian blade from Donatya, the San’iloman closed her eyes, and murmured a prayer of sacrifice. In a single motion, she swept the knife and released the owl. Merina looked up as the bird fluttered away on silent wings. A gasp escaped her lips. Her hands came to her throat and clutched at a fresh river of blood. The San’iloman took hold of the servant and held her close.

“I am sorry, sweet Merina,” she murmured. “This had to be done. Today the Gods will write your name in the books of the immortals, for you have made a great sacrifice for the glory of the Syrnte.”

Merina’s blood spilled dark upon Rishona’s ivory dress. She beat helplessly against the firm hold of the queen, squirming like a rabbit ensnared, passing one hand over her belly in desperate, rapid strokes as her knees slipped against damp earth.

Donatya retreated to the edge of the circle.

The rim ignited in a high blue flame. A muffled scream sounded from beneath the mountain, and a tremor passed through the earth. Mechnes’s heart accelerated. He sucked in his breath and signaled the men to ready their arms.

Merina seized the ivory gown of her mistress in a soundless plea for mercy.

Rishona paused and set her black eyes on the frantic servant. She bent low, stroked Merina’s hair, murmured in her ear. The servant’s struggles diminished, then ceased. Rishona wiped Merina’s bloodstained cheeks and placed a comforting hand upon her swollen belly. Her lips met the servant’s in a tender kiss. Then she laid Merina on the wet ground, where the pregnant woman twitched as gurgling whimpers escaped her lips.

An inky shadow bloomed beneath them. The trees shivered. The earth moaned. Rishona stood and retreated across the periphery of the circle, pace calm, slender back erect. The wall of flame left no mark upon her. She turned to observe her dying servant, and the world grew silent.

Merina’s body convulsed. Her eyes closed, and the tension left her limbs. Mechnes held his breath, hands gripping the hilt of his sword, eyes darting between the circle and his men, who watched with weapons drawn and shields raised. It was here, upon the threshold of death for Merina and her unborn child, that the Naether Demon had to find its way to the world of the living. Mechnes had waited long for this moment. All their dreams of conquering Moisehén depended on it. Yet as the ground beneath them groaned and shifted once again, a cold knot took hold of his belly. He found himself hoping the creature would not appear.

A hollow scream shattered the silence. Inside the circle, the ground twisted, flowed into a vortex of soil and rock, dragging the slave’s limp body down toward the heart of the mountain. Merina disappeared amid unearthly howls and the sounds of tearing flesh. The earth exploded upward, bathing Mechnes and his men in a shower of dirt and gravel. Inside the ring of fire, a creature swayed on long glowing limbs, its predatory eyes lost in gaping hollows, its mouth an open pit dripping with blackened saliva. One ebony-clawed limb grasped Merina’s corpse by the ankle. The slave’s belly had been ripped open, her ribcage torn apart.

Rishona lifted her palms in a gesture of supplication, speaking a smooth cadence of motherly love and reassurance.

The creature roared and lunged at her, hitting the wall of fire with an agonized shriek. Mechnes rushed toward Rishona’s side, but stopped short when she raised her hand in warning. The Naether Demon stumbled backwards and rocked on oversized limbs, the murky pits of its eyes steady on the San’iloman as it drew Merina’s corpse into a glowing embrace. Its head jerked around, seeming to focus on each of Mechnes’s men before turning toward the sky, the forest, the ground at its feet. It dragged one long claw through the upturned earth, gathered the loam and crumbled the rotting leaves in its pulsing grasp. Then it returned its empty gaze to Rishona.

Merolim, Matue. She stepped into the ring of fire. Hem alouim natue.

Merina’s corpse slipped from the Naether Demon’s grasp. Shuffling forward, the beast pressed its flat muzzle against the palm of Rishona’s hand. Her breasts rose with a sudden intake of breath, a smile graced her lips.

The Naether Demon nuzzled the places where Merina’s blood had soaked the ivory dress. A deep shudder passed through it, melting into a constant echoing purr. It lowered itself on lengthy limbs and released the weight of its body to the ground, reclining at her feet, resting its naked head against her soiled skirt, mouth yawning then closing again. Rishona stroked its glowing skin, a quiet hum upon her lips. When at last the creature closed its eyes, she looked at Mechnes, her expression one of triumph, passion, and joy. 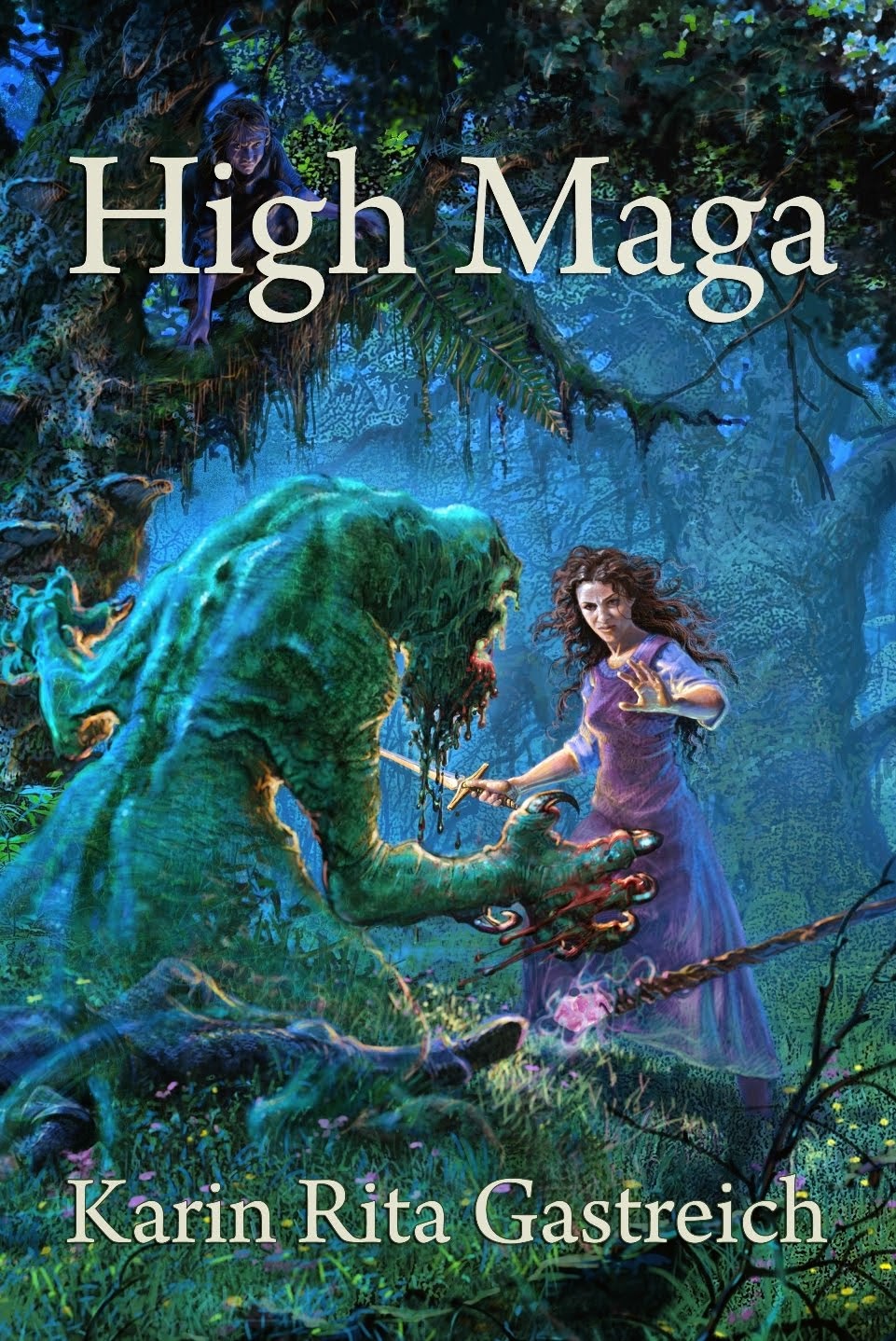 War strikes at the heart of women’s magic in Moisehén. Eolyn’s fledgling community of magas is destroyed; its members killed, captured or scattered. Devastated yet undaunted, Eolyn seeks to escape the occupied province and deliver to King Akmael a weapon that might secure their victory. But even a High Maga cannot survive this enemy alone. Aided by the enigmatic Mage Corey, Eolyn battles the darkest forces of the Underworld, only to discover she is a mere path to the magic that most ignites their hunger.

“War propels the book forward, and the characters are at their best when the events engulfing them are at their worst.” –Publishers Weekly

Soon to be released in audio book!

Posted by Heroines of Fantasy at 5:44 AM

One of my favorite scenes. So creepy-good.

Ooh! I can't wait to read this book!