Boo! It's a Fright Fest! 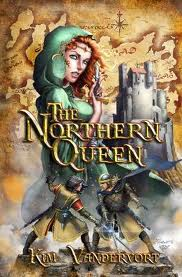 This month, we're offering some scary samplings of our contributors' work in honor of Halloween. This excerpt is from my second novel, The Northern Queen. In this passage, our heroes have been separated on divergent missions. Erich and Rheynard, while searching for two companions who've been captured by a tribe of Vonazol Free Plainsmen, encounter an experience that many, myself included, might find frightening. Enjoy!

The men angled toward the tunnels, keeping to the shadows as much as possible. When they came within a few lengths of the cavern mouths they fell behind an unoccupied tent and read the movements of the guards, searching for patterns they could use to advantage. The Plainsmen’s method soon clarified: two guards led a cluster of slaves out of the tunnels. Once the slaves had cleared, the guards fell in behind, leaving those tunnels unguarded. At least, from the outside. From what the men could judge, guards had already escorted three groups of slaves to their duties with the smithy and in the sewing cavern. This left six remaining guards; if the pattern held true, that meant three more groups of slaves before the tunnels would be clear enough to approach.


“Do you think they hold Kalt and Jarayah inside those tunnels?” asked Rheynard as they waited for the guards to lead the next group into the sunlight.

“Short of searching every tent or behind herd animals, I can not see another likely place.”

Rheynard drew his long knife and nodded. “Then we try there first.”

The sun was high overhead by the time the last guards fell in behind the final group of slaves. The men waited until they had moved out of earshot and any stray Plainsmen had passed by before drawing their swords and dashing for the tunnel. The cool air struck their faces in a welcome blow after so much time crouched in the sun; unfortunately, the near darkness also blinded them. However, they could not afford time to adjust their senses to the changed environment. They hugged the walls and pressed on, hoping an enemy would not fall upon them.

They did not travel far before they came upon a lit torch marking a three-way fork in the tunnels. Erich took a deep breath of stale air and tried not to think about the Vequen and their labyrinthine passages in which a man could lose himself for the rest of his days.

“Tunnels,” muttered Rheynard. “Why must there always be tunnels?”

Clearly he, too remembered their short, claustrophobic captivity within the caverns of the Vequen.

Rheynard took the torch from the sconce and walked a few steps into each passageway. He also sniffed the air of each and cocked his head, listening. Finally he came back to face Erich. “The left, I think.”

Erich frowned. “How did you decide upon that way?”

“We now stand roughly on the other side of the mountain from where we camped. This center passage probably leads to the archers’ ledges, while the path to the right leads down. To the slave quarters, most likely. That leaves the left.”

Erich clapped him on the shoulder. “Well done.” He took the torch and started for the tunnel. “Let us discover what we can about these people.”

The short passage ended at the foot of a stair carved into the stone and polished over time by the tread of many feet. A flickering orange glow betrayed torchlight somewhere around the curve of the spiral stair. And torches betrayed people.

Erich held the torch higher to catch the corners, but could find no other passage. The men reluctantly started up the stairs. As they climbed, the hair on the back of Erich’s neck rose. He felt uneasy, as though they were being watched, yet they had not encountered another soul. In fact, the absence of danger worried him more than the idea of facing one enemy after another in a continuous barrage. At least with a stream of enemies he knew the odds and how to work them.

A flicker of movement caught the corner of his eye. He stopped, turned—but saw only solid rock. A trick of the light, he told himself, shaking his head. He glanced at Rheynard on the stair behind him, but his friend only gave him a curious look. He continued up the steps.

Then he saw it again—only this time he was more certain of his sight: the wall of solid rock had blurred, shifted, then sharpened in focus before his eyes. He held out his arm to hold back his companion. “Rheynard. Did you see—”

A hand shot from the solid rock and gripped his sword arm at the wrist. He cried out in shock, then pain as jolts of fire radiated beneath his skin from where the hand touched. He could not hold his grip; his fingers loosened of their own accord and his sword clattered to the ground.

Rheynard raised his sword high to amputate the disembodied arm, then bellowed a cry of pain when another arm shot from the rock behind him to grab and pin his arm high overhead. His body jerked as the same jolts of fire coursed through him, only easing when his sword fell. Once both weapons had been lost, the mate for each arm materialized and together, both arms worked to pull the two men through the cavern wall. They struggled against their unseen attackers, and were rewarded only with additional jolts of fire for their efforts. Finally, as though drawn beneath the water’s surface to drown, Erich took a deep breath and sank backwards into stone.

Faboo, baby. And way to leave off on the perfect bit!

I remember this scene! Very harrowing, being sucked in by the walls at the end. Thanks for being a part of Fright Fest. :)